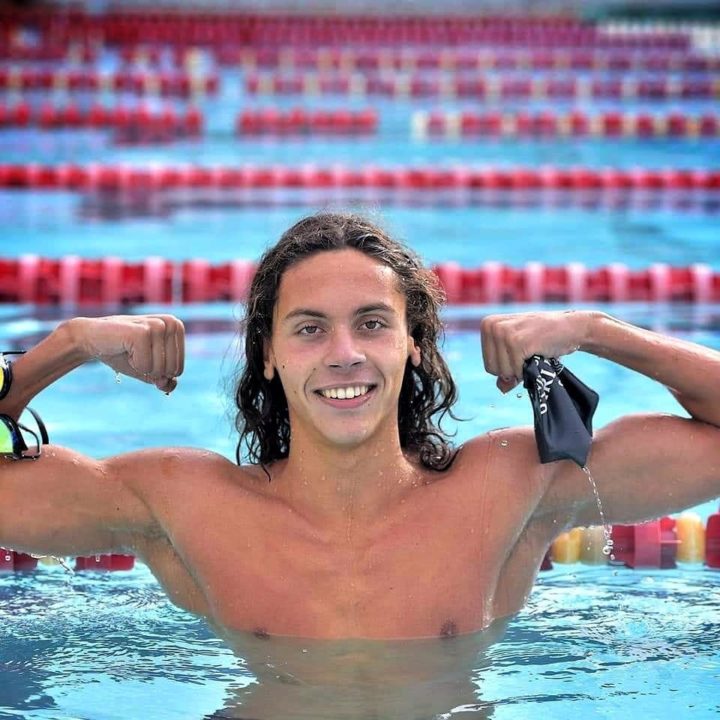 First, for 16-year-old Popovici, the ace fired off a new lifetime best in the men’s 100m free, punching the clock in a time of 49.09. Opening in 23.99 and bringing it home in 25.10, Popovici cleared the former meet record en route to topping the podium.

Entering this meet, Popovici’s personal best in the 100m free rested at the 49.26 he registered in October last year in Bucharest.

For perspective, American Caeleb Dressel owns his nation’s age group record for 15-16 year-olds at 49.28, a mark he put up in 2013. With his swim here, then, Popovici is faster than the Olympic medalist and multi-world champion Dressel was at his age.

But Popovici also produced a lifetime best in the 200m free en route to victory. Touching in 1:48.62, the Romanian wrecking ball hacked nearly a full second off his previous career-quickest of 1:49.58, again a time he put up in Belgium just days earlier.

Splits for this longer distance included 53.04/55.58 to give Popovici a time that would rank him as the 3rd fastest American ever in the 15-16 age group.

On his performances, Popovici told SwimSwam, “I just felt better in Ukraine, just like I usually feel during a meet. I’m now going for that 48.57 A-cut.”

Wreaking Ball vs Wrecking Ball..isn’t one a Miley Cyrus song and one is machinery?

Slight correction about Popovici previous PB in the 100 free that was the 49.26 swum on early Oct. 2020 https://www.youtube.com/watch?v=0KSd9F0WXUQ
Really intriguing his improvements in the 200 free before the taper.

Pov: How to get disliked on SwimSwam