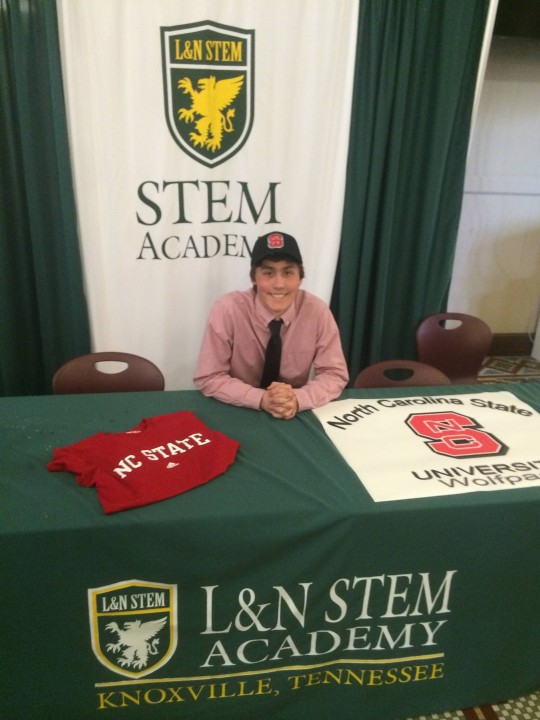 Recruiting season continues to go well for the NC State Wolfpack as perhaps the NCAA's fastest-rising team added a butterfly prospect with a huge trajectory as well. Current photo via Marshall Goldman.

Recruiting season continues to go well for the NC State Wolfpack as perhaps the NCAA’s fastest-rising team added a butterfly prospect with a huge trajectory as well.

James Bretscher heads to NC State from Tennessee, where he attends the L&N Stem Academy in Knoxville and competes for Tennessee Aquatics.

Bretscher looks like a great pickup for NC State through the butterfly, backstroke and freestyle races, but could be an absolute difference-maker in the butterflys.

But probably more impressive than the times themselves is the huge improvement curve Bretscher has shown over the past three years.

Bretscher only broke 50 seconds in the 100 fly for the first time last summer, and since then has cracked both 49 and 48 in a matter of months.

Here’s a look at how his times have improved over the past several seasons in the butterfly events:

NC State is coming off a season in which their men took 8th at the NCAA Championships despite a costly relay DQ. the reigning ACC champs, coach Braden Holloway‘s program is definitely on the rise, and there’s precedent there for creating great butterflyers, as rising senior Christian McCurdy finished 4th nationally this past spring.

Don’t forget Barrett Miesfeld who is built a lot like Bretscher and was top 8 at NCAAs. Kudos to Marshall Goldman and TN Aquatics for the development of this young man.

Wow, that’s some major improvement in just a few years. Good for him and NC State!

Good Spring pick up for the Wolpack.