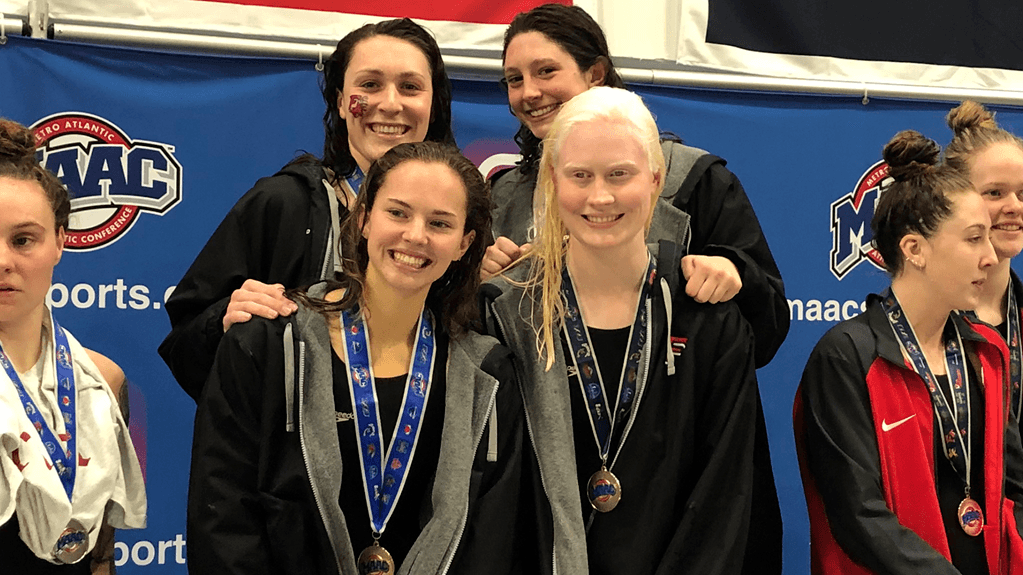 Last season, the Fairfield women opened a new era of MAAC swimming, winning the conference title with 72% of their points coming from freshmen. This season, that group is now sophomores, and they opened the 2019 MAAC Championships on fire again, sweeping the day’s events on the women’s side of the pool.

On the men’s side, Rider, buoyed by a 1-2-5 performance on the men’s 1-meter springboard, opened up a day 1 lead as they seek an 8th-straight conference title, but if the opening action is any indicator, they’re in for a fight this year. They have only a 9 point lead over Bryant, who won the meet’s opening race.

Fairfield swept the two relays that made up the entirety of the day 1 schedule for the MAAC women. In both cases, all 4 members of last year’s relay were underclassmen; in both cases, Fairfield entered slightly different lineups this year anyway; and in both cases, this year’s relays were a little slower than the meet-record setters last year.

But in both cases, it didn’t matter, as Fairfield was unchallenged in either race.

In the 200 medley, senior Kelly Cordes (26.94), junior Colleen Young (28.98), sophomore Morgan Hansen (24.39), and sophomore Maria Nitti (23.09) combined for a 1:43.40. That’s .05 seconds off their conference record set last season. Young is the new addition to this year’s relay, though she was actually faster than the swimmer she replaced, Victoria Krivitsky, was last year by 4-tenths.

Nitti and Cordes both pulled double duty on the evening.

The winning Bryant relay included Matthew Mays (22.81), Tavish Boyle (24.31), Micah Ornelas (20.88), and Matt Zichelli (20.11). The middle two legs of Boyle and Ornelas were the difference makers in the relay: they combined for a 2.1-second margin over Rider, which they needed because Rider’s anchor Vincent Gibbons closed fast, splitting 19.38 to nearly run down Zichelli.

Rider won this relay in a MAAC Record last year, and only graduated their butterflier, but that, combined with 7-tenths add by their breaststroker Carter Paules, was enough to swing the race.

Rider swept the rest of the day’s events on the men’s side. Sophomore Dillon Walles won his first conference title in the 1-meter, scoring 263.25. That put him 3 points ahead of his senior teammate Joe Warker (260.20). Trevor Hazlewood from Bryant scratched out a 3rd-place finish, 1 point behind Warker, and depth on the boards from the Bulldogs kept the scoring close on day 1.