European Duel in the Pool Roster Decimated By French Scratches 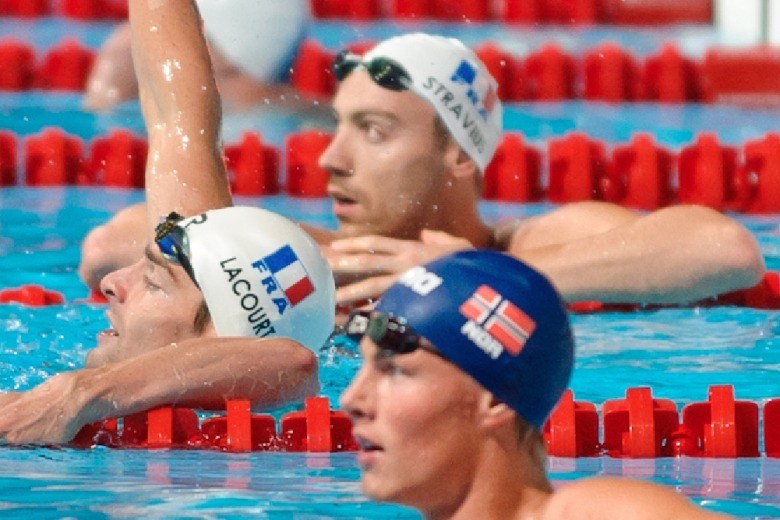 A full 6 French swimmers have been scratched from the original Duel in the Pool roster, perhaps sinking their chances at winning this meet. Archive photo via Victor Puig

A pair of French stars’ names have been removed from the women’s side of the European All-Stars squad for the 2013 Duel in the Pool. Charlotte Bonnet and Camille Muffat are both no longer listed on the Europeans’ roster, despite having been there upon original announcement.

Though the names were scrubbed with little fanfare from the Europeans, this will have a significant effect on the outcome of the meet, as Bonnet and Muffat were both likely to be on European relays, and if not there, then Muffat was certainly among the favorites to score in both the 200 and 400 meter freestyles. Muffat was the World Record holder in the 400 until August, the 2010 World Short Course Champion in the 200, and the 2012 Olympic champion in the 400 free in long course.

Fortunately for the Europeans, they at least still have the woman who broke Muffat’s WR in that 400, Mireia Belmonte-Garcia, but this scratch turns that race from a winnable one to the Europeans to one where they’ll be challenged to even earn a split.

The men’s roster might have been hit even harder. Four swimmers from the French team have been scratched. That includes Florent Manaudou, who was a late scratch from the European SC Championships with a shoulder injury; Fred Bousquet, who was a scratch of the same meet, only due to self-proclaimed old age; and then Fabien Gilot and World Champion Jeremy Stravius have both scratched out as well (apparently healthy).

Those scratches probably cost the Europeans a shot at their first-ever win in this series. The Americans did look a bit vulnerable this year, but the Europeans would have still had to have all things go about perfectly for them to win. In the above, they’ve probably lost at least 8 scoring swims in a meet where only top three finishers earn points, and that might be insurmountable for them, even after the Ryan Lochte injury.

Yannick Agnel, who is currently training in the United States, is still on the roster as the lone remaining French swimmer.

The full rosters, as up to date as the ones on the official site, are below.

The dates are such that most swimmers shouldn’t have obstacles to participating, such as school, exams, work, the crucial phase in their training etc.

These kinds of happenings, mostly fun and not too serious in any form, are exactly what helps promote and keep people involved in swimming while we aren’t living in the major championships or the Olympics.

I think she is competing in Russia – Big money meet, Quite a few of the Hungarians chose that meet over the Duel in the Pool. Ruta, wanted to compete, but is obliged to swim Lithuanian SC Nationals by her federation, shame.

It’s a shame indeed but only because the Lithuanian Nationals are held at the same time. Otherwise Ruta’s explanation for absence is totally fine. I’m sure there is a bulge of kids in the swimming clubs in Lithuania owing to her success. it must be important for Lithuanian swimming that their brighest star competes at least once a year in the country that she represents.

Europe would have needed Meilutyte, it’s for sure, just like the French, especially Manaudou and Stravius on the Men’s side. I also can’t help wondering where are rest of the Swedish elites as their countrywoman, Michelle Coleman, is listed. Presumably it would have been funnier to not travel alone. Hopefully, some last-minute… Read more »

Maybe give Adam Brown a ring?

I still think the Europeans can win this, this is by far the strongest women’s team they’ve sent even with the two withdrawals (which don’t hurt them too badly). They can blunt the impact from Ledecky with Friis, Carlin, and Costa. Moreover Ledecky can’t help on the point heavy relays. The US women really only have an advantage of the breaststroke. I don’t think they can stick with the Europeans without Missy. Romano’s going to have to be the x factor to stem the loss of points in the sprints.

Well, given the short notice, I Imagine any replacements will have to be British, because many have committed to the event in Russia. Maybe Brown and Barrett? Maybe Proud? I really don’t know who they can get on board, but they’re going to need to try and do so.

Jessica Hardy is an excellent breastroker, but I still find it somehow peculiar that the US team has an advantage over Europeans on Women’s breastroke.

Hmmm – Seems quite shameful, if it is true that most of the athletes were healthy. They should not have taken the places of other Europeans who could have been bothered to turn up, it’s ridiculous. Embarrassing day for French swimming, to be quite honest. The Europeans will NEED to call in some last minute replacements, for the men’s sprint events, even if it is only Brits who can make it at such short notice.

What????
What happens?
For Manaudou and Bousquet, ok. They have good reasons.
But for Muffat, Bonnet, Gilot and Stravius, it’s absolutely ridiculous. And shameful.
They don’t have any good reason to miss that meet.
About the team race (which doesn’t interest me too much), only Manaudou, Stravius and Bousquet could bring big points. Muffat isn’t in good shape. Gilot isn’t a short course swimmer. Bonnet is still in development.
This December month is definitely a month to forget for French swimming.

Bobo,
Are you asking the french for reason?

If they don’t feel like going, they are not going.