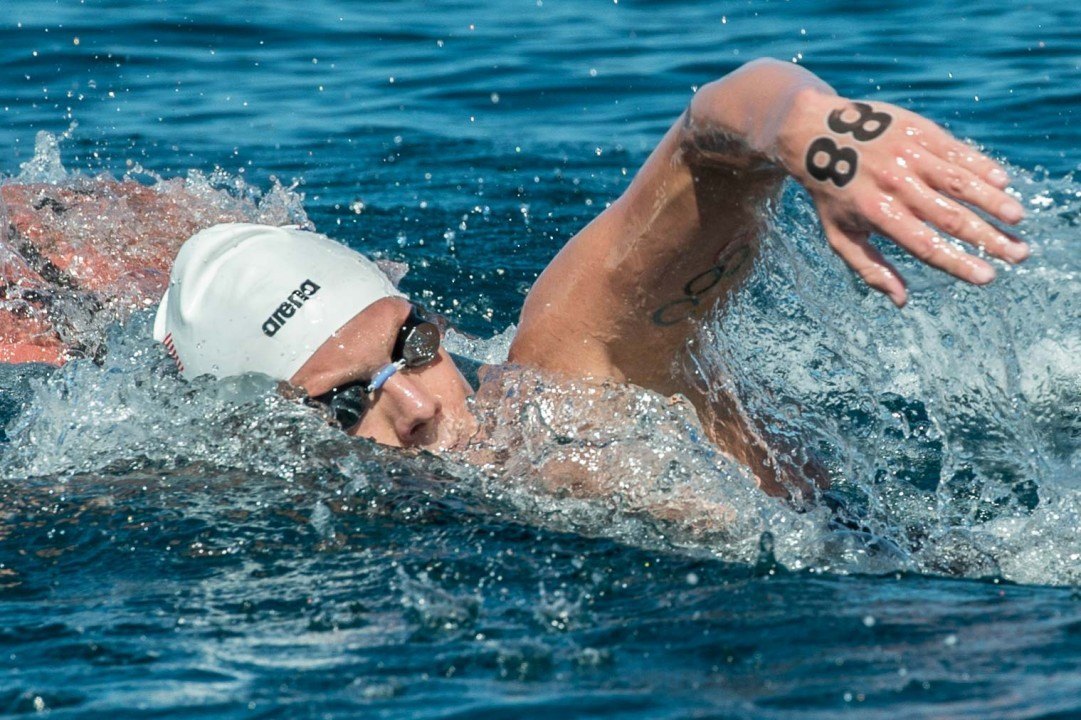 A bid by Dubai, UAE to host a stop on the 2015 FINA Open Water World Cup circuit might draw... Archive photo via Mike Lewis/Ola Vista Photography

A bid by Dubai, UAE to host a stop on the 2015 FINA Open Water World Cup circuit might draw a boycott from American athletes, according to 2012 U.S. Olympian Alex Meyer. Meyer, along with many in the United States’ open water community, are fuming with the news that the country that hosted a race in 2010 that resulted in the death of America’s best, at the time, open water swimmer Fran Crippen, might have a chance to host a race again in 2015.

For the full details of Meyer’s message to FINA, click here to see the original story.

In an extensive interview with ESPN’s Bonnie Ford on Thursday morning, Meyer says that he feels that any race in the UAE would not be safe, regardless of the preparations taken. USA Swimming Executive Chuck Wielgus backed Meyer’s criticisms, saying that in 2013, FINA told him USA Swimming to ‘go pound sand’ when they presented their concerns.

Dubai has not been formally awarded hosting duties, which will be one topic of conversation expected at the 2014 FINA Extraordinary Congress later this year in Doha.

While it remains to be seen how much sway and influence the opinions of USA Swimming and its athletes will have with FINA in making this decision, a threatened boycott will receive a small increase in attention after American participation in the 10KM World Cup series has increased this year.

The next stop of this year’s series will be held in Chun’an China on Sunday, October 12th.

Had you read my post accurately you would have realized adversity pertains to how people are dealing with it now.

A “boycott” just sounds so vengeful.

The 2008 female gold medalist Russian passed out in the water face down with hypothermia in World Championships. She was fortunate to have someone there to yank her out. The key was there were eyes on her. She opted out of going to the cold water races. Russia does not boycott cold water races as a result.

Just a different way of dealing with adversity.

Do your research before you pass judgement. Fran’s death had nothing to do with “dealing with adversity”.

Had you read my post accurately you would have realized adversity pertains to how people are dealing with it now.

It shouldn’t be taken as a slight against UAE, and they should be welcome to host indoor competitions.

I believe this is a FINA problem, NOT a UAE problem. UAE always followed the same rules and protocol as every other race when they hosted.

And I agree with Sid – eyes on the athletes is what is most important. And for the most part that has changed for the better since 2010.

There are a lot of partially informed or misinformed people making comments here.

The amount of negligence on the UAE’s part is too great to list but cost us a life. To put things into perspective, at the technical safety meeting, organizers showed a tourism video of the UAE before discussing anything related to safety or the race. Their priority was tourism and money, not safety or even running an athletic event.

There is plenty of documentation that discusses their negligence, and I encourage those making inaccurate comments to do some research.

At many World Cups things other than safety are promoted, not just at that race.

If there is documentation that discusses how UAE was negligent beyond how any other World Cup Organizing Committee acted at that time, please post this.

What most people seem to forget is that all World Cups had a very similar lack of taking safety seriously at that time. I fault FINA for not taking this more seriously. A… Read more »

Time for USAS to push the issue and put forth a proposal at next year’s General Congress that would increase open water athlete safety. While USAS is usually pretty reluctant to use the ‘soft power’ it has in the sport, when it does, it can line up the ducks pretty well like it did in forcing FINA to change the tech suit rules in 2009. I remember a number of federations saying that they wanted to go back to textile then, but it took an organized effort from USAS to get 90% of the federations to agree to a proposal that overrode what the FINA Bureau wanted.

“a race in 2010 that resulted in the death of America’s best, at the time, open water swimmer Alex Meyer, might have a chance to host a race again in 2015.”

I think this was supposed to say Fran Crippen.

From what I understand, FINA has essentially quashed any legislation that would put maximum safe water temperatures on the books for open water swimmers and thumbed their collective noses at the US delegation. After the Dubai debacle in October 2010 that took Fran Crippen’s life, I applaud Alex’s efforts for a boycott given that after almost four years later, nothing has been done to ensure the safety of these athletes. Bravo, Alex!

Actually in the wake of Fran’s death there was an independent FINA investigation http://www.fina.org/H2O/index.php?option=com_content&view=article&id=2062:fina-task-force-report&catid=288:special&Itemid=179 that led to some new legislation. The current upper limit on temperature is 31 degrees Celsius (87.8 F) – still considered very hot and dangerous by many.
In my opinion the temperature issue – hot or cold – is very important but still pales in comparison to what should be the highest priority in providing safety at any open water race – Eyes on Athletes and Response Time. Bigger is not always better … Better is Better.
We all need to be better as Fran would have wanted it. Peace.

100% agree with you Sid! I guess I was just focusing on the temperature because that is what caused the initial issue, but you are right in saying there were many neglectful issues that fateful day… The simple fact is, when Fran passed out from heat exhaustion, and someone had seen him immediately, he may still be here with us today..
I had forgotten that FINA had created the upper limit of 87.8 degrees F, which is ridiculously warm and seemed rather arbitrary, with nothing to back up their decision medically or scientifically… IMHO, it felt like they established that the upper limit to let the Dubai officials off the hook since I believe the water temp that day… Read more »

Glad to hear that Alex is speaking up. Losing Fran Crippen was a negligent tragedy. UAE should not be allowed to host again, and USA Swimming would be justified in a boycott. RIP Fran.

What did UAE do differently from other races that year to cause this boycott? Keeping in mind UAE was within the FINA guidelines in regards to the temperature