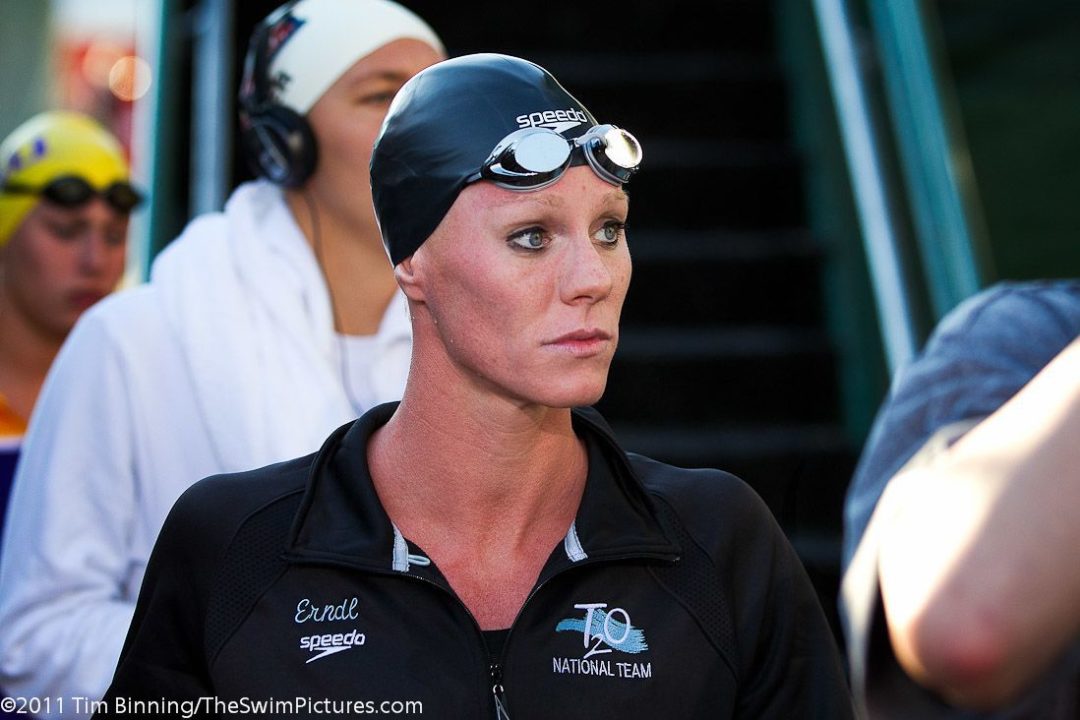 After the 2013 USA Swimming World Championship Trials, SwimSwam contributor Christina Wright sat down with T2 Aquatics’ Erika Erndl and wrote a piece about the impressive swimming that she’s doing into her 30’s.

At age 35, Erika Erndl is still swimming very hard, training six days a week with doubles on Mondays and Wednesdays, speed sets on Tuesdays, endurance on Fridays, drylands each day, and even swimming with parachutes and t-shirts. Most workouts are in the 5000 to 6000 yard/meter range.

“I’m probably doing more than people think I can do at this age,” she says after a morning practice of around 6000 meters. “People know me as a 50/100 freestyler, but I train more for the 200. I do a lot of power stuff.”

In Indy, Erndl was likely the oldest female swimmer in the pool—most of her competitors were born when she was in high school—but she doesn’t think of the age difference as a negative. “World Championship Trials was a good meet for me, but not a great meet,” she says. “I try not to notice the big age difference. I don’t view myself as less capable because I am 35. Since I returned to swimming in 2007 I have swum faster than ever did before. It doesn’t matter that I am 35—I am capable of doing better.”

Back in 2001 when Erndl graduated from the University of North Carolina there wasn’t an established post-graduate competitive swimming tradition. And unlike a lot of collegiate swimmers, Erndl never tired of the sport. “I never burned out,” she says. “I always felt like I could have done more and was capable of doing more. Now, there are more opportunities to keep swimming. That wasn’t an option in 2001.”

However, Erndl’s comeback was sort of a surprise—even to herself. Her husband Kevin was coaching a masters team, getting up at the crack of dawn to coach practices. “I would roll over in bed, tell him to have fun coaching, and go back to sleep,” she says. “But then one day I just decided to go to practice with him and that’s when the addiction started again.” Soon she found herself competing at a masters meet in Coral Gables, Florida where she placed 2nd and 3rd. “The hunger to compete was there and I told my husband that I wanted to make my Trials cut,” she remembers. “This was in 2007. I swam with the masters team for a few months and then I started training with the age groupers. And then I made my Trials cut in 2007. I thought, ‘It’s on.’”

Now Erndl trains with T2 Aquatics. Kevin Erndl started T2, or Transcendent Training, as a triathlon company. The motto for T2 has always been “Exceeding Ordinary Limits.” Once legendary coach Paul Yetter was hired the swimming side of the club became the main focus. “I’ve learned that there are a lot of different ways to go fast,” Erndl says. “But at T2 our philosophy is that we’re going to bust our asses and that’s how we will beat you. I try to have fun with the sport, but sometimes I have to check myself. Growing up I always loved swimming and had fun—it was just what I did. Now it is my job. I’m fortunate to have a husband to support me so that I can train full time and be able to recover and take a nap each day. I strive to strike a balance and to put things in perspective.”

So, what are Erndl’s goals going forward? “I am going to either the US Open or to Southern Zone Sectionals,” she says. “Or I might go to both and swim a couple events at each.” After that Erndl plans to really strike that balance between swimming and the other parts of her life. “I will take a break. I haven’t taken a break for more than two weeks at a time since 2007. I’m not sure how long the break will be,” she says. “If I could keep swimming forever I would. I have been working really hard since I came back. I’ve been very motivated to keep going. Fall will be a good time to take time off and to see what life is like without swimming for a couple months. I can never really plan it out. When I am training I do it 100% and I need to have another life. I need to be a wife.”

For the other “older” swimmers out there who are considering testing the waters again, Erndl has this to say: “If you think you might be one of those people that asks themselves, ‘What if?’ then get out there and make it happen! At least you’ll know that you tried! You can’t put any kind of limit on yourself. You can push yourself beyond where normal people think they can.” We will certainly be watching as she continues to push herself in the next few months before that well deserved break.

She is an amazing woman.

I love seing swimmers doing unusual things !!! She is a model of what’s possible ….

And thank you Swim Florida for providing this avenue for the Erndl’s at the Norris Pool in Naples FL. Plus a turn-key 100+ member program for T2 to inherit.