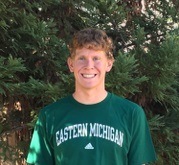 Tanner Olmos, 500 freestyle All-American at Buchanan High School and distance specialist at Clovis Swim Club has verbally committed to Eastern Michigan University. Tanner was the 2014 CIF Central Section champion and a CIF State finalist in the 500.  He also owns cuts for Winter Junior Nationals in the 500, 1000, and 1650 yard free events, along with Summer Juniors in the 800 and 1500 meter freestyles.
Eastern Michigan has won the Mid-American Conference 32 times in their history, taking all but three championships since the 2000 season, with their most recent loss being in 2014 when Missouri State won the title for the first time.  Last year was a close battle as well, with only twenty points separating the Eagles and the Bears, and several teams in the league rising to a higher level of competitiveness within the league.  The 2016 recruiting class will matter if EMU is going to continue to stay on top.  Tanner adds immediate strength to the distance events, as his best 500 time would have been 9th at the MAC, and his mile would have edged into the top 8.

“I decided on Eastern Michigan because the program felt like the perfect fit. The team offered a positive environment that I can see myself thriving in, along with championship expectations that I know will push me to be the best I can be.”

I swam there from 99-02. You will love training for Coach Linn! Always good to see EMU get some love on here!