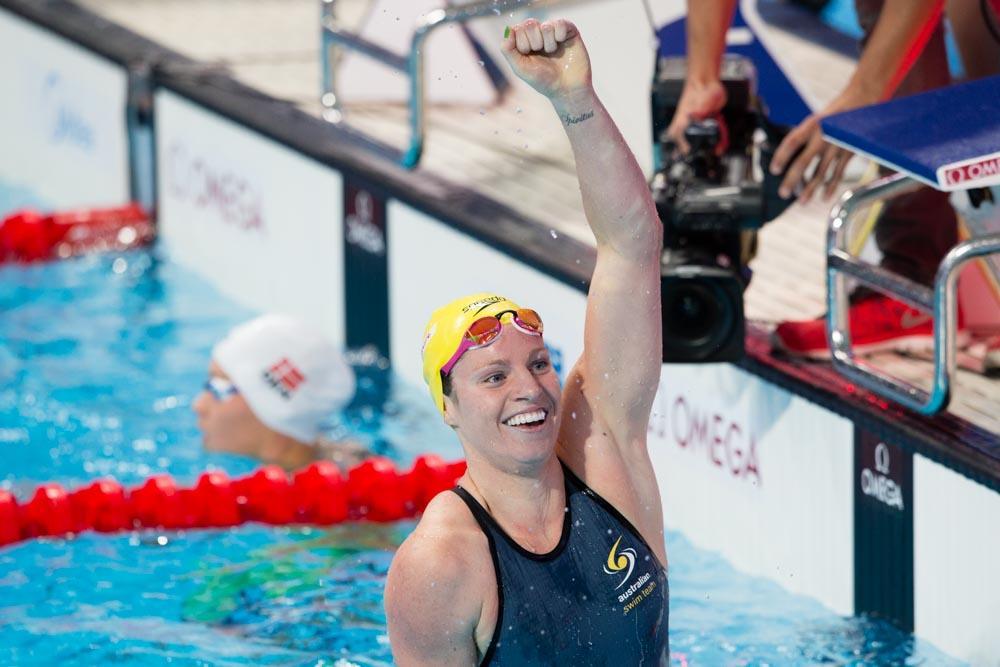 Emily Seebohm bettered her own Australian and All-Comers records on the way to only the second time a 200 backstroke ever under 2:00. That swim highlighted a fast night of racing that also featured many of the fastest swims in the world for this season.

Jessica Ashwood on top once again, this time just missing the Australian and All Comers record with an 8:13.63. Still, that time shoots her to the top of the world rankings, surpassing Boglarka Kapas performance from Hungarian Short Course early in the month:

Men’s 12 and Over 50 Freestyle Multi-Class

Eighteen year old Mitchell Kilduff had both the fastest time and the most points, finishing with a 24.49 and 1012 points.

Women’s 12 and Over 50 Freestyle Multi-Class

Tiffany Thomas-Kane crushed her competition with a time of 35.43 and 1110 points. None of her competitors managed more than 1000 points on the night.

Emma McKeon was close to Marieke Guehrer’s All Comers record of 25.31, but ultimately had to settle for the win in 25.35. McKeon was not pressed, just one other swimmer (Madeline Groves at 25.91) was under 26. That time slid her into third in the current world rankings:

Georgia Bohl made short work of some veteran competition to win the 100 breaststroke in 1:04.65. The eighteen year old was followed by the twelve years wiser Sally Hunter (1:04.85) and defending champion Leiston Pickett (1:05.38). Hunter and Bohl join world #1 Kate Meili as the only swimmers under 1:05 so far this season:

There was no surprises in the 50 breaststroke, as Christian Sprenger won in 26.86, well off his own Australian record (26.24). 16 year old Matthew Wilson had a notable junior result, finishing fifth in 27.32. The World Junior record target time for that event is 27.05. Sprenger’s time ranks him just outside the world top ten.

Cate Campbell bested both her sister Bronte and earlier winner Emma McKeon in a sizzling 100 freestyle. All three swimmers were under 52 seconds, with the elder Campbell leading the way in 51.38, followed by McKeon in 51.78 and Bronte Campbell in 51.81. Cate Campbell went after Lisbeth Trickett‘s world record (51.01). She put her feet on the wall in 24.54, then faded a bit with a 26.84 back half. Trickett’s world record was even more unevenly paced, she took that race out in 24.24. All three swimmers are now ranked top five in the world:

Cameron McAvoy had little competition on his way to a dominant victory in 46.31. McEvoy was just .02 back from Matthew Abood‘s All Comers record from 2009. He was followed by Kenneth To (47.31) and Tommaso D’Orsogna (47.34). That time also put him well ahead of the world field, while his two countrymen also made their way in the world top 5:

Ellen Fullerton took it to the field on the backstroke leg and never looked back to win in 4:28.72. In doing so, she matched her own Australian and All Comers record from 2009. That time also puts her ahead of world record holder Katinka Hosszu in the current world rankings:

Now to the race of the night. Emily Seebohm swam a searingly aggressive race- taking the first half out in 58.23. That time would put her in the top 10 in the world 100 backstroke rankings, and she followed it up with a 1:01.26 to finish in 1:59.49. That time puts her just a quarter of a second behind Katinka Hosszu’s world record of 1:59.23. Seebohm was so dominant that despite two of her competitors putting up world top five swims, she still won by nearly three seconds:

Mitchell Larkin defended his national title and set Australian and All Comers records in the process. His winning time of 22.91 makes him world #1 by an astounding half a second:

Thomas Fraser-Holmes upset defending champion David McKeon to capture the title in 3:37.63. His performance is also a world’s best:

Women’s 12 and Over 100 Freestyle Multi-Class

St Peter’s Western Swim Club won on the final leg of the relay, with Cade Fasala splitting 48.74 to close it out against Christian Sprenger (49.71). They would win in 3:14.01. Tommaso D’Orsogna had the fastest split in the field for the 2nd place team in 47.06