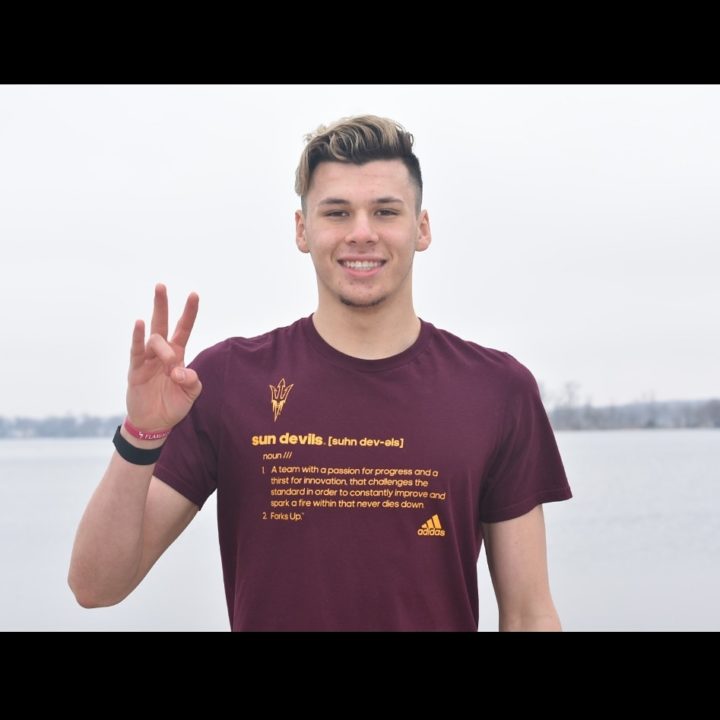 Perez says that he decommitted from Alabama due to lack of comfortability with the coaching staff following Coley Stickels' resignation. Archive photo via Emilio Perez

Top-tier sprinter Emilio Perez won’t be competing in the NCAA this season, though he’s planning on joining the Arizona State Sun Devils down the road.

Perez, a highly-touted recruit in the boys’ high school class of 2021, had initially announced his verbal commitment to attend ASU in March 2020 before decommitting this past February and signing on with the University of Alabama.

However, Perez has since opted out of joining the Crimson Tide in 2021-22, telling SwimSwam that it had to do with the team’s recent coaching staff changes.

“In my opinion, after Coley Stickels left there were many changes to the team,” Perez said. “I initially wanted to stay, however, I wasn’t very comfortable later on which led to me decommitting.”

Perez says his initial decommitment from Arizona State was due to external factors, and that he instantly connected with the group in Tempe and is looking forward to joining them in the future.

“I loved working with the swimmers and coaches at ASU, especially coach Herbie (Behm) and coach (Bob) Bowman,” he said, referencing the back-and-forth communication he had with the team after committing.

“I immediately connected with everyone and it has always felt like a good fit for me. When I first decommitted from ASU it was because of things outside of my control and the team’s control. Since then we have sorted things out and I am ready to work with them in the future.”

In the meantime, the former Greenfield High School student will spend the 2021-22 season training with the Southwest Aquatic Team (SWAT) in Wisconsin, hoping to compete frequently in local meets, attend some of the TYR Pro Series competitions, and other national-level meets.

Perez added that due to the pandemic he hadn’t been able to have an official visit with ASU previously, but hopes to do so soon.

The Arizona State swimming & diving team redshirted their entire roster for the 2020-21 season due to the pandemic, resulting in them have a relatively large roster in the upcoming campaign.

hands down one of the best swimmers from Wisconsin, bowman will treat him well

Let’s give these 18 yr ones a break! They have had a stressful, traumatic few years and are young and trying to figure out life. I wish these comments in general would be a bit more thoughtful when dealing with younger swimmers. Bash the older adult coaches (we can take it) but leave the 18 and unders alone.

Smart move, lol. Leaving the program of a known sprinter and going to a program known for (checks notes) not sprinting. But at least his 400 IM will get better. You know, if someone handed the Bama job to say, Tony Ervin, people would say, hmm, that’ll be interesting, let’s give him a chance.

Check your notes again. The 4 x 100 free relay was a 2:47 right before covid. I actually think he is not fast enough(44.5 isn’t going to make the conference team?)for ASU maybe he wants to drop a little time and see if he can get some money somewhere.

Well yea, because Tony Ervin is a multiple time Olympic gold medalist, and is one of the greatest sprinters of all time. If you are insinuating that people are skeptical on Geer because of her gender, then you’d be completely off base. If someone like Coughlin or Franklin were to be hired as a head coach of a top collegiate program with no coaching experience, people would buy in the same way they would to Ervin. It’s a combination of the fact that Geer has no formal coaching experience, and as far as elite swimmers go, was relatively unaccomplished (in that she never made an Olympic team, only ever made one OT final, and only medals internationally are from WC… Read more »

I’ll put it to you this way. How many Bama coaches — or swimmers for that matter — have been a three-time NCAA champion (Jonty won one) or a 27-time All-American (none)? How many coaches in D1? Pretty sure Nesty with his 4 would be the only one. How many coaches have won a WC medal? How many were named their conference’s scholar-athlete of the year? We’re talking an NCAA team, not an Olympic team. And I’m sure you mean “head” coaching experience, not coaching experience. As for your analogy, Magic Johnson, Wayne Gretzky, Bob Cousy, Ted Williams, Bart Starr — and I could go on and on — had terrible coaching records. Michael Jordan would’ve been the worst coach… Read more »

With respect, Ol’ Longhorn, I think maybe you’re making the opposite point of the point you think you’re making.

And no, they mean “coaching experience.” She has basically done none of it. She had a faux “volunteer” gig so she could train and travel with the team. She was doing very little actual coaching, and that is the extent of her coaching experience.

I would challenge you to walk on to any pooldeck, look… Read more »

I’m not saying that being extremely successful as a swimmer will necessarily lead to extreme success. But it at least provides a credential that could make up for a lack of coaching experience. Geer has neither the experience as a swim coach, nor a resumé in her swimming career that should/could allow her lack of experience to be less of an issue. Especially considering that there are dozens of assistant coaches on NCAA staffs and head coaches for club teams that are far more qualified than Geer for the job–plenty of them female.

I’m not saying that I know if Geer will be a good or bad coach, but I certainly have no evidence to suggest that she will… Read more »

Well, when a man is offered a filet mignon, and a tofu burger and tater tots get served instead, a man’s gotta do sumthin’…!!

We do not talk down on tater tots in this household.

Anyone who knows me well has heard my tater tot surprise story. A family favorite since the 1970’s!

Tatertots are an undertold story in sustainability. They were green ag before green ag was cool. They took leftover food scraps from processing potatoes and figured out how to elevate those scraps, previously garbage, into the highest form of potato.

Braden looking for a NIL contract with ConAgra…

OreIda is currently owned by Kraft Heinz. I don’t think Conagra actually has any brands that make tatertots – unless you count “veggie tots,” and I don’t.

Let’s give the NEW coach a chance. We are only talking about 10 to 16 males and female recruits. If they find out after a few months that BAMA isn’t the program for them, they can enter the portal. They’ve only wasted a year of their life. They are young, they will get over it.

You wanna waste 1/4 of your college swimming on an unknown? Plus the hassle of trying to transfer your units over and hoping you don’t have to retake something.

Wasn’t she already on the staff? Its not like they needed getting to know her time.

He loves working with the ASU coaches and swimmers, but hasn’t been on an official visit.

I mean with covid official visits were shut down for a long time, you must’ve missed the pandemic we’ve been having the last year and a half.

How has we worked with them if he hasn’t been working with them?