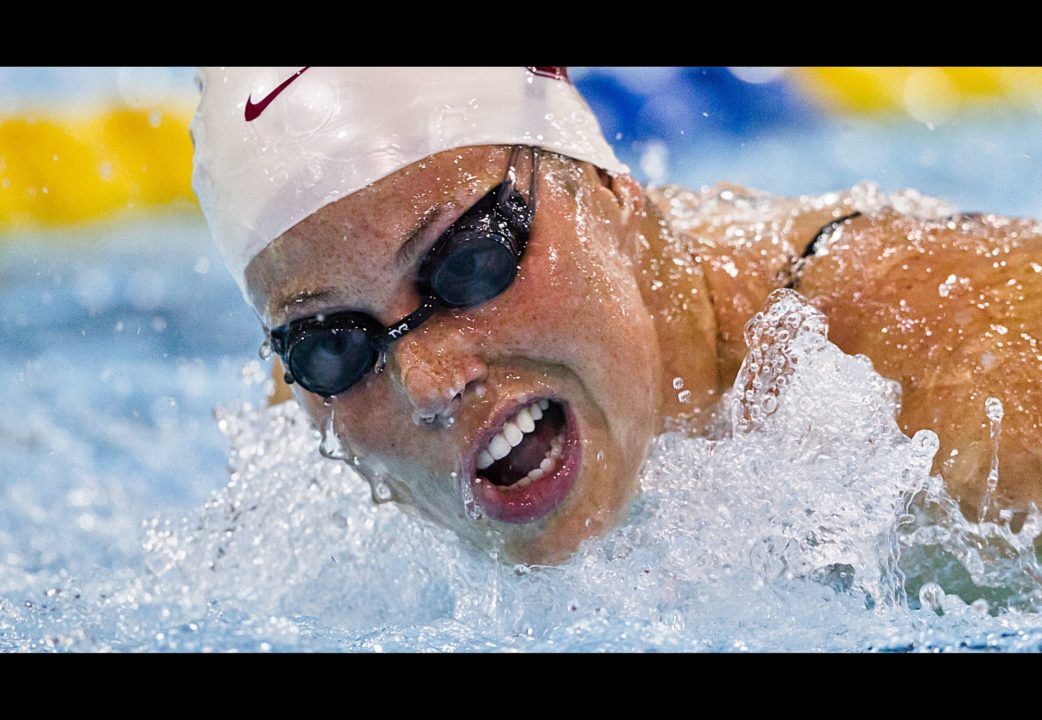 2008 Olympic medalist Elaine Breeden was formally inducted into the Stanford Athletics Hall of Fame on Sept. 9th, along with nine other female athletes.

The two other inductees are Tara VanDerveer, who is entering her 37th season coaching the women’s basketball team, and Linda R. Meier, who has served as a longtime volunteer at Stanford.

The host of the 2022 Hall of Fame Ceremony was 2012 Stanford Hall of Famer and two-time Olympic softball player Jessica Mendoza. As the host, Mendoza introduced the 2022 inductees and welcomed them to the podium to give their speeches.

You can watch Breeden’s speech in the video shared by Stanford Athletics below.

Breeden swam for the Stanford Cardinals from 2007-2010. She was a four-time NCAA individual champion, which includes three titles in the 200 fly and one in the 100 fly that she won in her senior year. When she was named a captain of the women’s swim team, Breeden led the Cardinals to an NCAA runner-up finish in 2010. She ended her collegiate career as a seven-time Pac-10 champion and 24-time All-American.

In 2009, Breeden broke the American, U.S. Open, and NCAA records in the 200-yard fly with a time of 1:49.92. Her time was the first under 1:50 and stood as the American record for nearly a decade before fellow Stanford swimmer Ella Eastin lowered it in 2018.

Breeden qualified for the 2008 Olympic team in the 100 and 200 fly. She brought home a silver medal in the 400 medley relay with legendary swimmers Natalie Coughlin, Rebecca Soni, and Dara Torres.

Breeden retired from swimming after her attempt to make her 2nd Olympic team in 2012.

“I owe much of my swimming success to my Stanford coaches, Lea and Erik Maurer,” she said in her speech. “It’s been said that gratefulness is the root of joy. I owe so much of the joy in my life to Stanford, and for that, I am forever grateful.”

She is now a full-time mother of two daughters, 4-year-old Julia and 2-year-old Victoria. Her husband of 10 years Colin Penrose recently began his career as an orthopedic surgeon at Midwest Center for Joint Replacement’s two locations in Indianapolis and Bloomington, Indiana.

Wow, a great and inspiring speech! I urge everyone to listen to her thank you speech. I don’t think she left out anyone to thank. The journey she took was fun to listen to. Congrats Elaine!

Congratulations to all of these women.