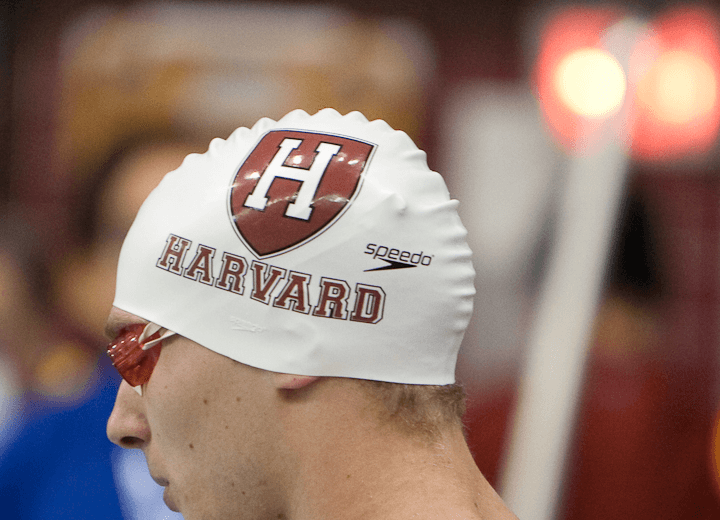 Harvard now has three bona-fied blue-chip recruits in their recruiting class of 2014.

Edward Kim, who is one of the top all-around sprinters in the country outside of Jacksonville’s Bolles School, has verbally committed to Harvard. He will make an outstanding complement to the already-committed breaststroker Shane McNamara, as Harvard is well on its way to a top-10 recruiting class.

Kim, who swims for the Bellevue Club Swim Team in Washington State (which doesn’t have a major Division I men’s swim program), has a lot of ways to help the Crimson. He’s been 20.11 in the 50 free and 44.29 in the 100 free, plus a 1:36.29 in the 200 free. Even that 44.29, done when he was a sophomore, might be selling his potential short, after he split a 43.8 at the Washington High School State Championships for Eastlake High as a junior.

He was the 2013 state champion in the 100 fly with a 48.00 – leaving him two-tenths of a second shy of NCAA All-American Cody Roberts’ state record.

For the Crimson, he’ll be the next great piece of what has been an impressive sprint-freestyle stretch in the last few seasons.

Also committed is Tan from Delta Aquatics and the Illinois Mathematics & Sciences Academy in suburban Chicago.

Tan is not quite as good in long course as he is in short course, but that simply shows that there’s a lot of room for him to still improve.

Between these three big recruits alone, Harvard has some assurances that their medley relays will be good for some time to come. Additionally, because Tan and Kim are good in so many different relay-oriented events, new Harvard head coach Kevin Tyrrell isn’t really boxed in by ‘needs’ a whole lot. He can continue to go after the ‘best available’ interested swimmers.

Congrats to Ed Kim Harvard scored!
Unfortunately there is no major mens D-1program in the ENTIRE northwest of the PAC 12. University of Washington (no swimming), Washington State (women only), and Oregon State (women only}, University of Oregon (no swimming) all have given up on mens swimming!
In fact on the wast coast of the United states no mens swimming north of Cal……
UC Davis, I am sure most readers know, gave up mens swimming before the 2012 london Olympics……Shame on those PAC 12 schools

Shane McNamara, Ed Kim, Steven Tan, Jack Boyd and now Koya Osada have all committed to Harvard! 5 swimmers in the top 100 in the nation all committing to an ivy league school. They have so much talent and will only get faster. Harvard, in my mind, should have a top 7 or better recruiting class in the nation!

What constitutes “major” in your eyes? Being in a “major” conference? Seattle U just joined the WAC for its first year as a men’s swimming conference. Which includes UNLV, the team Cody Roberts (whom you mentioned) swam for in college. SU swimming is on the rise, I think you’re selling them short. They are THE ONLY men’s D1 program in the PNW, no matter your definition of “major”.