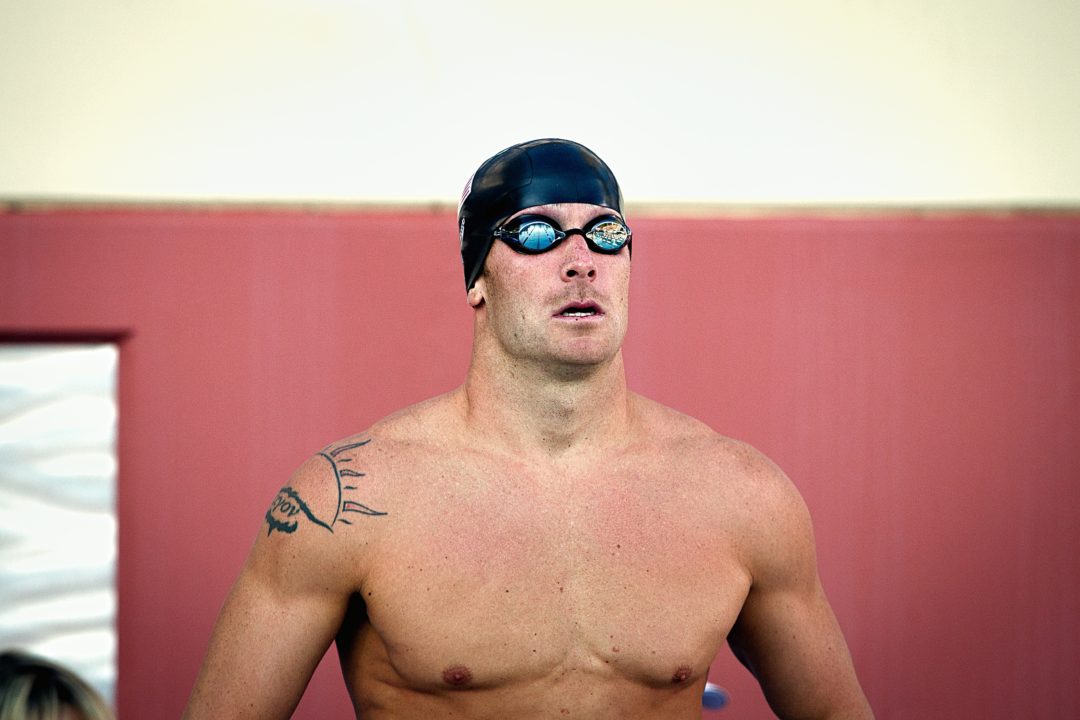 Olympic gold medalist Ed Moses qualifies for the Olympic Trials having swum only 2 practices in the past 4 years. Archive photo via Tim Binning/TheSwimPictures.com

When asked about his motives, Moses said it was as much about attending his 5th-straight titles (with 4 of those 5 being as a competitor).

“When (Ryan) Lochte asked me if I was going a few weeks ago, I realized I had to do something,” Moses said. “So last week I posted on social media asking what the time to qualify in the 100 breaststroke was and what the last day (for qualifying was). Someone said 1:03.69 and June 20th.

“So I looke up to see if there was a meet and (the meet in) Irvine was 10 days away. So I called up the Golden Road Rebels and asked if I could swim for them since they are just over the hill in Hollywood, and if I could join them at the Irvine meet.

“(Coaches) Mario (Marshall) and Mike (Lucero) welcomed me out, registered me on the team, and called up the Meet Director and asked if they could get me entered.”

Moses said that after that build up, he “obviously had to step up,” so he trained twice and did “like 1500 yards.” He then called up Speedo and asked for a racing suit, showed up at 8am, warmed up for 200 meters, did a 32.5 pace 50, and told his new coach Lucero that he was ready to go (joking he didn’t want to get sore from doing too much more than that).

“I was pretty damn excited, honestly. Everyone loves cheering for the old guy.

“But for real, it was great to be on deck and see some old faces and coaches; memories and stories were coming out. The swimming community is so close-knit, it’s like a second family. I’m sure I’ll be sore tomorrow because I didn’t warm down, but it’s still pretty cool to be going to my 4th Olympic Trials as a competitor.”

As for his goals, Moses confirmed that he intends to actually race the 100 breast, not just show up as a spectator. “I can’t tell you how many messages I’ve gotten from friends and fans saying ‘so are we going to Rio?!?!?!’ My answer to them is ‘of course…if you buy my plane ticket!'”

While he’ll be back in the same place racing as he was four years ago, Moses’ focus over the last year has turned to pursuits outside of the pool.

“I’ve been so caught up and busy finishing business school at UCLA. I graduate and get my MBA in 2 weeks. All I was doing was studying and running a business and constantly fitting in work outs, in gym of course. I started a sports statistics software app 8 months ago called StatFuel and have been raising money for it this whole spring. So between school and the company obviously swimming was never an option. But would never miss swimming Olympic Trials as I believe it’s the most pressure packed intense sporting event out there.”

And in his typical west-coast style, Moses summed his excitement up best with a closing “This Trials is going to be siiiiiiick.”

Moses is a former Olympic gold medalist for Team USA. At the 2000 Olympic Games in Sydney, Moses won a gold medal on the world record-setting 4×100 medley relay, on which he swam breaststroke. Moses also earned a silver in the 100 breast at the Olympics. Previously, Moses swam for the University of Virginia, where he won the 100 and 200 meter breast at NCAA Championships in 2000, and set world records in both events.

After Moses retired from swimming, he started a career as a semi-professional golfer. He also co-founded MoJo Marketing & Media, a creative content consulting company, where he has served as vice president.

He made a comeback for the 2012 Olympic Trials but failed to make it out of prelims in the 100 and 200 breast.

He should create another TV series for the 2016 trials – anyone remembers watching Against the Tide that he filmed for 2012 Trials comeback?

Does anyone have a video of this!?

Every bit as incredible is Steve West’s 1:04.38 … At age 44! In 1996, Steve went 1:02.60 in finishing 4th at US Olympic Trials in Indy. In his better event, the 200, the ex-Michigan Wolverine was barely touched out of a ticket to Atlanta, finishing a heart breaking 3rd. How great is it to see these old guys still swimming these quality times 🙂

Proof that US Olympic swimming trial qualifying times are too slow. In track and field it would be like a 49+ second 400 meter runner going to Olympic trials.

Maybe he hasn’t been in the water, but he’s OBVIOUSLY been working out. He looks CUT in that photo.

Watch this guy drop a 59. @ trials and qualify for Rio.

Some comments on this website are made in jest – for the enjoyment of people who love swimming.

That is incredible. Just by doing his thing- he has inspired alot of people and has everyone talking. Great for swimming and great for him. Good Luck! Wow!