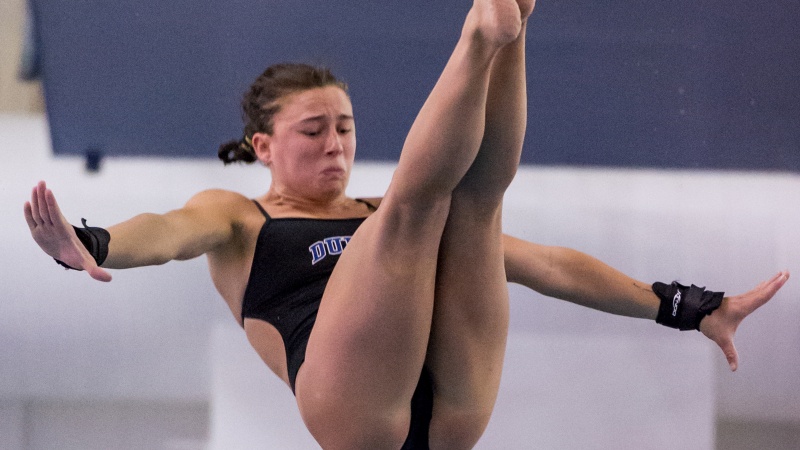 After wrapping up the regular season with the program’s first dual meet victory over North Carolina, the Blue Devil women... Current photo via Duke Athletics

After wrapping up the regular season with the program’s first dual meet victory over North Carolina, the Blue Devil women look to maintain that momentum heading into this week’s ACC Championships. The four-day championship meet will be held at Georgia Tech’s McAuley Aquatic Center.

For more championship information and a complete schedule of events, click here.

Last Time Out
Taishoff Aquatics Pavilion served as the site for last weekend’s Janis Hape Dowd Carolina College Nike Invitational after a water emergency in Chapel Hill forced North Carolina to move the event to Durham. Blue Devil swimmers rewrote the season top times list at the meet, taking down a number of personal bests. Juniors Alex Peña and Anna Quinn were recognized for their performances at the meet, earning ACC Performer of the Week honors.

ACC Championship Rewind: Recapping Last Year’s Meet
The Blue Devil women came away with a sixth-place finish at last year’s conference championship, totaling 642.5 points over four days of competition in Greensboro, N.C. The sixth-place finish was the highest for the women’s program since Duke took sixth at the 2010 ACC Championship. The Blue Devils moved up four spots from their previous year’s finish and broke seven school records in the process. The meet also saw MaryEllen Targonski capture All-ACC honors with a third-place showing in the women’s platform diving event.

Blue Devils in the Conference Landscape
Junior Leah Goldman enters the ACC Championship seeded fourth overall in the 200-yard individual medley (1:57.33) and third in the 100 butterfly (52.22), while freshman Alyssa Marsh is ranked fifth (52.79) and junior Isabella Paez ninth (53.48) in the same event. Paez is also listed sixth in the 200 butterfly (1:56.61) and distance swimmer Verity Abel is seeded seventh in the 500 freestyle (4:43.56) and in the mile (16:27.40), as is senior Maddie Rusch in the 50 freestyle (22.33). Sophomores Mickayla Hinkle (53.66) and Maddie Hess (53.81) are both ranked top-12 in the 100 backstroke. Duke also enters the meet with a 400 freestyle relay ranked fourth in the conference (3:16.69). The Blue Devil women have posted NCAA provisionally-qualifying marks in 12 swimming events and have surpassed the NCAA Zones qualification standards in all three diving events.

Scouting the Competition
The ACC currently features six women’s teams ranked in the top 25 of the TYR/CSCAA Division I poll. The NC State women lead the way at No. 7, followed by No. 8 Virginia. The Cavaliers have claimed each of the past nine conference titles. The Louisville women checked in at No. 10 in the Feb. 1 edition of the rankings, followed by the Blue Devils at No. 18, North Carolina at No. 23 and Notre Dame at No. 24. The Duke women finished seventh in the final ACC regular season standings with a 2-2 mark against conference teams and an overall record of 6-2.

Blue Devils Feature Depth in Diving
The Duke men’s and women’s divers head to Atlanta after turning in a stellar regular season on the boards. Senior Kirby Quinn owns the group’s top score to date on the 1-meter springboard (286.13) and sophomore Mackenzie Willborn leads the way on the 3-meter board (317.40). Freshman Jaina Gaudette has recorded the Blue Devils’ top award this year on the platform (251.78), followed by Targonski (246.80). On the men’s side, two-time ACC Performer of the Week Evan Moretti has posted the top 1-meter score (380.85), while freshman Nathaniel Hernandez has excelled at the 3-meter height (399.30) and on the platform (371.70).