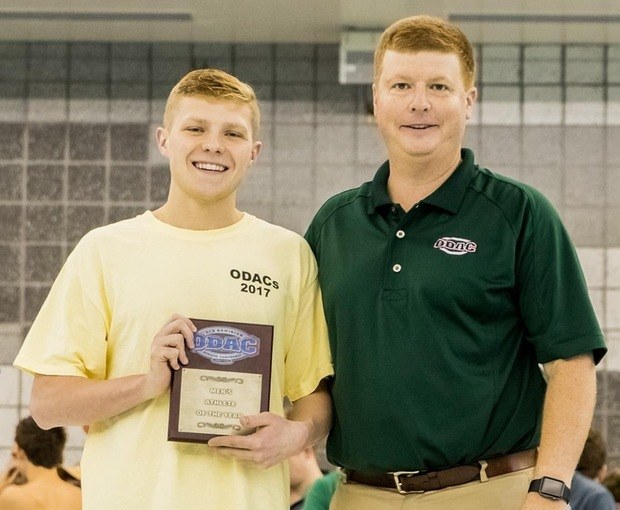 Randolph-Macon senior Robert Redenz (Moseley, Va./Cosby) was named ODAC Male Swimmer of the Year after setting a pair of conference records during the 2017 ODAC Swimming Championships.

Redenz also was second in the 200 IM and was a member of three second-place relay teams.

Joining Redenz on All-ODAC First Team were juniors Ivan Fadeyev (Manassas, Va./Osbourn Park) and Ealon Mann (Spartanburg, S.C./Spartanburg). Fadeyev finished first in the 200 Back, fourth in the 200 IM and fifth in the 400 IM. He was also part of three second-place relay squads. Mann’s top finish was second in the 50 Free. He was third in the 100 Free and fourth in the 100 Fly. Mann was also part of three second-place relay teams.

R-MC had three swimmers on All-ODAC Second Team: senior Josh Carter (Mechanicsville, Va./Atlee) junior Bryan McCarthy (Chester, Va./Thomas Dale) and sophomore Connor Seif (Trent Woods, N.C./New Bern). Carter’s top finish was fourth in the 100 Breast. He also took fifth in the 200 Breast and was part of a second-place relay team. McCarthy’s best effort was fifth in the 100 Fly. He was also on a pair of second-place relay teams. Seif finished fourth in the 100 Back, sixth in the 1650 Free and eighth in the 500 Free.