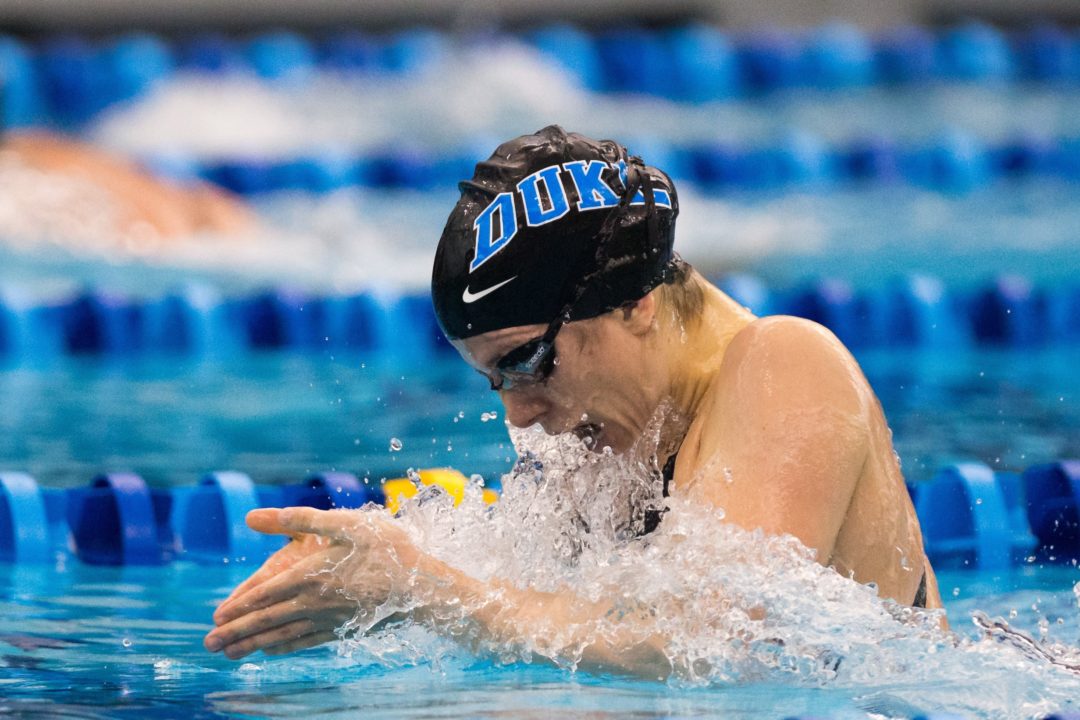 The Duke women's swim team has received a boost to its efforts with a new scholarship pool to play with. (Above: breaststroker Christine Wixted, who was 2nd at last year's ACC Championship meet). Archive photo via Tim Binning/TheSwimPictures.com

In the next few years, however, the Duke women will move to fully-funded status. In 2012, Duke expanded its staff by a coach, and now they will have 14 women’s equivalent scholarships to award – increased from just two that they had been receiving.

“This is very exciting news and the possibilities are endless,” said men’s and women’s head coach Dan Colella. “The support from the athletic department will enable us to be a team that in coming years will contend for conference titles and compete at a high level nationally. We’re very thankful for the support of Dr. White and the administration.”

The move is part of a spending binge by the Athletics Department, which will now also provide maximum scholarships in women’s track & field, and is adding a softball team for the spring of 2018 (including the building of a brand new softball facility).

“Duke University is fully committed to providing the most complete educational and athletic opportunities for women,” said White. “Adding both softball and new scholarships will enhance and enrich the collective experiences for female student-athletes. Specifically, softball will be a great addition to our varsity programs because it is played at the highest level in the Atlantic Coast Conference.”

The Duke women have done fairly well despite being at a less-than-full scholarship lode. They have struggled with depth at the ACC level a bit (they were just 7th as a team last year), but have consistently sent swimmers and divers to NCAA’s. That includes one diver, Abby Johnston, who dove at the 2012 Summer Olympics. To do so with just two scholarships is fairly incredible.

The move could be tantalizing for establishing an east-coast equivalent of the powerful Stanford program: a school that attracts high-level recruits for academics, while still offering the ability to put premier-level focus on athletics (though, the obvious trade-off is that Palo Alto is generally speaking a nicer area than Durham).

Though there was no indication on whether there’s a direct connection, Duke football had its best season in over 50 years, and qualified for the ACC Championship game. That is likely to result in significant new revenues for the athletics department.

i am Tihitina minassie from Ethiopia /Africa/.Graduated from Hawassa university with bachelor of Business management since 2008 and 4 years experience on governmental sector. I want continue MBA but no get money so please give me full sponsor

This full funding event is very consistent with Dr White’s
philosophy on funding non rev (Olympic) sports. Notre Dame
athletics has become far more than just a football based system and
anyone who knows ND athletics will tell you that the road for this
success was carved and paved by Dr White. He was a wonderful,
visionary leader and is doing the same superb job at the helm of
Duke athletics.

What is the funding status for the men’s program at Duke?

SwimFan – I couldn’t say for certain, but I believe it is less than fully-funded as well.