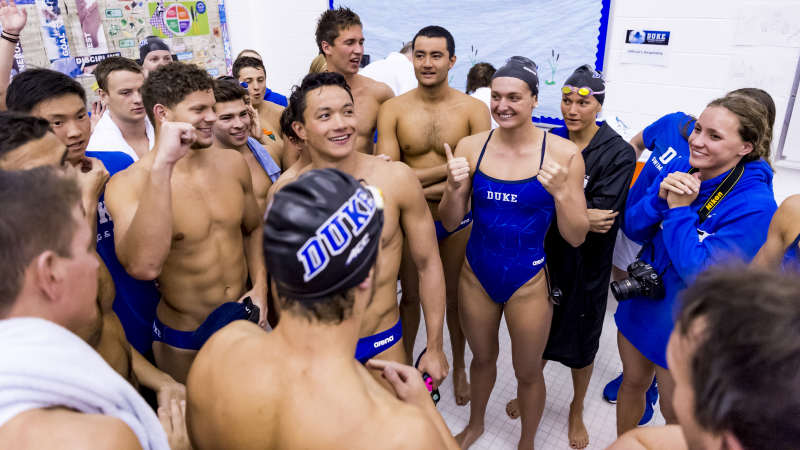 The Duke swimming and diving program closed a historic 2018-19 campaign by celebrating accomplishments from the pool, the boards and the classroom Friday at the program’s annual awards banquet. Current photo via Duke Athletics

DURHAM, N.C. – The Duke swimming and diving program closed a historic 2018-19 campaign by celebrating accomplishments from the pool, the boards and the classroom Friday at the program’s annual awards banquet.

Ten individual student-athletes received team awards, including St. George, juniors Nathaniel Hernandez and Kylie Jordan and freshman Maddi Pullinger, who were all recognized for the Most Outstanding Performances of the season.

Hernandez qualified for an NCAA championship final for the first time in his career to wrap up the spring, finishing eighth in the country in one-meter diving. He joined former Blue Devil national champion Nick McCrory (2010, 2011, 2013, 2014) and John C. Connor (1949, 1950) as the program’s first team All-Americans in men’s diving. Pullinger impressed at her first ACC Championships meet, taking second in the women’s one-meter final to become the first Blue Devil in women’s program history to garner All-ACC accolades as a freshman since 2018 graduate Leah Goldman captured bronze in the 100-yard butterfly her rookie season.

Jordan joined Pullinger on the podium at ACCs, taking third in the 100 butterfly for the first All-ACC honors of her career. Her performances throughout the meet helped the Duke women earn its highest finish since 1981 in fifth. St. George also shined at his final conference championship, taking down the program record in the 100 backstroke twice. He placed seventh in the event championship final and lowered his own program record again the same day as the leadoff swimmer on Duke’s 400 medley relay (45.76).

Freshmen Everett Werner and Cabell Ann Whitlow received the Blue Devils’ Above and Beyond Awards, presented to one male and one female who have gone above and beyond the expectations of the coaches in terms of dedication, work ethic, commitment and performance. Their contributions in training and in competition were considered instrumental to the success of the women’s and men’s squads this season. Both rookies represented Duke at the ACC Championships, with Whitlow taking seventh in the 200 butterfly, ninth in the 400 individual medley and 14th in the 200 individual medley and Werner racing to top-30 showings in the 200 butterfly and 400 individual medley.

Taking home the Blue Devil Awards were seniors Legard and Willborn, two of the program’s co-captains this season. The award is presented to one female and one male athlete who exemplifies the true characteristics of a Duke student-athlete. These athletes are committed to their team’s betterment in terms of academics, athletics, community work, motivation, encouragement, dedication and attitude. Willborn closed her collegiate career on the boards by reaching ACC finals in the three-meter and platform competitions and qualified for NCAAs for the second time in her career. Legard played a key role individually and on Blue Devil relays as the men’s team took down program records in nine events en route to a seventh-place finish at the ACC Championships.

Moretti and junior Alyssa Marsh were named the team’s Most Valuable Athletes for their performances throughout the 2018-19 campaign. Marsh turned in an impressive season with program records in the 50 and 100 freestyle and as a member of Duke’s 200 and 400 freestyle and 200 medley relays. She rounded out the NCAA Championships the most decorated swimmer in program history, collecting honorable mention All-America accolades in the 50 freestyle, 100 butterfly, 200 and 400 freestyle and 200 medley relay. Moretti also had a strong conclusion to his season, advancing to an NCAA final for the third time in his career to capture honorable mention All-America honors in one-meter diving. He also recorded a meet-high 77 points across the three boards at the conference championship en route to being named the ACC’s Most Valuable Men’s Diver of the meet.

Both the men’s and women’s teams were represented at the 2019 NCAA Championships, with the women finishing 23rd for the second-highest showing in program history and the men tying for 29th for the highest finish since 2014. In addition, the Duke women were 12th final TYR/CSCAA Division I Poll for the highest national ranking in school history.