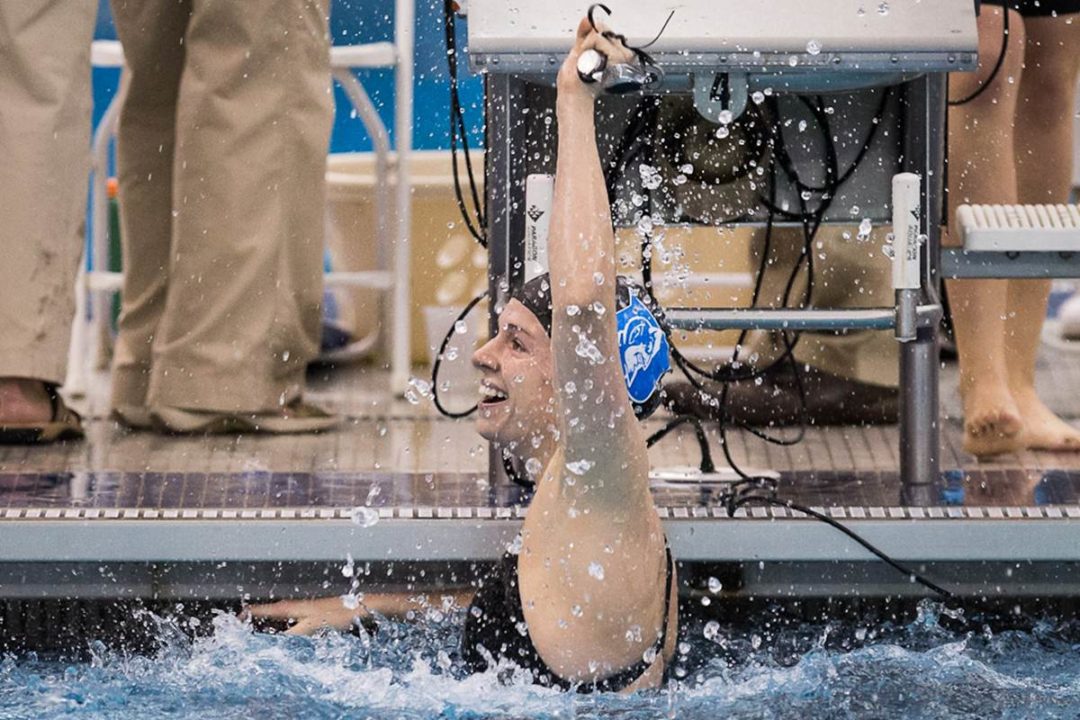 Duke standout Christine Wixted currently ranks second in the ACC and is tied for 13th in the country with her 100 breaststroke time of 1:00.27 at the Nike Cup.

The Duke men’s and women’s swimming and diving teams are set to resume competition Saturday, Jan. 11 when they travel to Columbia, S.C. to face South Carolina in a dual meet at the Gamecocks’ Carolina Natatorium. Live results will be available for Saturday’s action, which begins at 1 p.m. with the diving events, followed by the swimming events at 2 p.m.

The South Carolina men were tied for 25th in the Dec. 11 CSCAA Division I rankings and own a season ledger of 3-1 while the women’s team is 1-3 heading into Saturday’s matchup. The squads concluded the fall portion of the season with a pair of second-place finishes at the Virginia Tech Invite in late November, registering 15 NCAA provisional time standards over the three-day meet.

Redshirt freshman Kevin Leithold paced the Gamecock men during the fall and ranks among the top-50 men’s swimmers nationally in the 100-yard freestyle, 100 breaststroke and the 200 IM. On the women’s side, junior Victoria Mitchell has won 11 individual events so far in 2013-14 since transferring to South Carolina from Louisville. In diving, juniors Cole Miller and Patricia Kranz each garnered SEC Diver of the Week accolades during the fall.

The Blue Devil men and women turned in a number of strong performances but were unable to hold off South Carolina in their regular season home finale Jan. 12, 2013 in Taishoff Aquatic Pavilion. The men’s dual meet came down to the final relay with Duke falling to the Gamecocks by a 159-141 margin. South Carolina also picked up a win over the Blue Devils on the women’s side, 184-115.

Duke swimmers and divers totaled 12 individual and two relay victories on the day, highlighted by Hunter Knight’s record-setting swim in the 100 breaststroke.

“It’s great to get outside of the conference and swim an SEC school,” said head coach Dan Colella. “I see the women being extremely competitive … The score is going to go back and forth throughout the course of the meet and it’s probably going to go down to the last relay, which is always exciting. For the men, it’s an opportunity to swim a top-25 team. They have improved considerably over the last couple years on the men’s side. We definitely have the ability to race and be extremely competitive.”

Over the course of three days at the 2013 Janis Hope Dowd Nike Cup Invitational in Chapel Hill, N.C., the Blue Devil men and women recorded seven first-place finishes, set two program records and achieved 15 NCAA ‘B’ cuts and 17 NCAA Zone Diving Championships qualifying marks. The women finished fourth out of seven squads in the final standings while the men also placed fourth out of six teams.

Senior Christine Wixted broke program records in the 200 breaststroke and the 200 IM at the meet and classmate Nick McCrory swept the men’s diving events with three standout performances.

Senior diver Nick McCrory earned a spot on the United States’ 2014 FINA World Cup team in December with a second-place finish on the 3-meter springboard at the USA Diving Winter National Championships in Austin, Texas. He totaled 1434.25 points through the preliminary, semifinal and finals rounds to finish second behind only his Olympic 10-meter synchronized diving partner David Boudia (1442.80).

The Blue Devil men’s and women’s swimmers headed south to train in the sun and warm weather the week after finals in December. The teams completed one week of training and also enjoyed a little relaxation in Islamorada and Key Largo during the annual trip.

Senior Christine Wixted currently ranks second in the ACC and is tied for 13th in the country with her 100 breaststroke time of 1:00.27 at the Nike Cup. Fellow senior Hunter Knight is among the top 40 male swimmers nationally in the 100 (54.19) and the 200 breaststroke (1:58.87), while the women’s 200 freestyle relay of senior Lauren Weaver, senior Christine Wixted, freshman Maddie Rusch and sophomore Chelsea Ye ranks fifth in the ACC with a mark of 1:32.18. Rusch is also second in the conference and 33rd nationally in the 50 freestyle at 22.61. In diving, senior Nick McCrory paces the conference on all three disciplines.