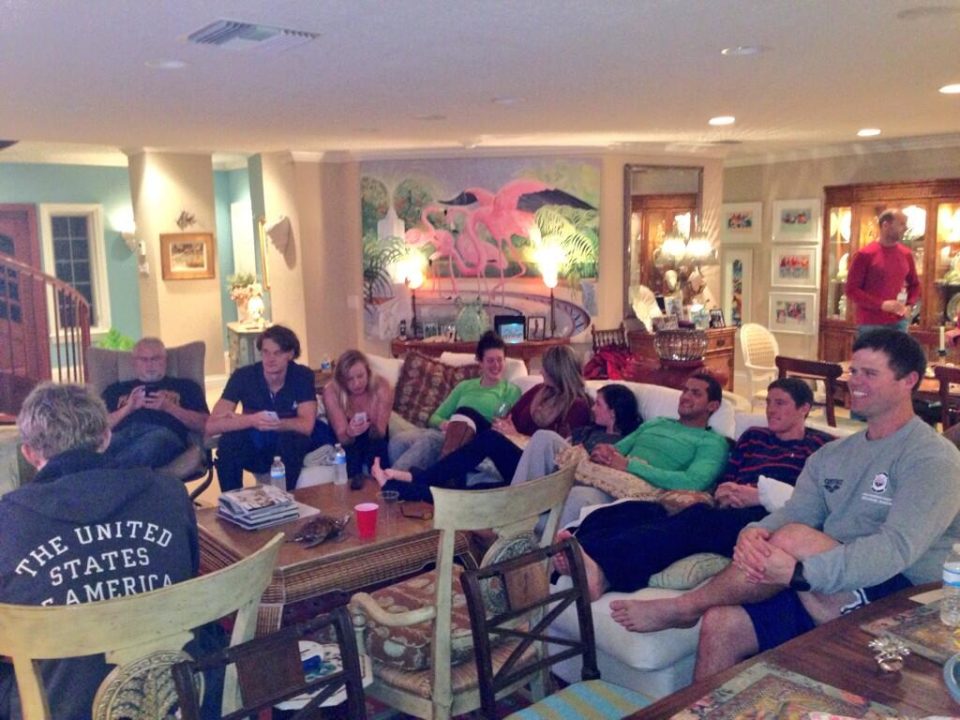 Among other great male freestyler in the NBAC group are Olympic champions Michael Phelps and Yannick Agnel. Current photo via Shandrew PR

200 fly standout Ethan du Preez tried the 100m sprint on for size, as Tatjana Schoenmaker was also in the water to close out Durban’s Grand Prix.

In a SwimSwam exclusive breaking story, Olympic gold medalist Ous Mellouli of Tunisia is switching to NBAC to train under the famed coach Bob Bowman. Mellouli has been in Florida with the NBAC group on a winter training camp and plans to return to Baltimore with the team and continue training with them.

When we contacted his publicist Jerry Shandrew, of ShandrewPR, he confirmed the switch and iterated that “Ous will always be a USC Trojan, but he wanted to try new coaching styles before he retires so that he can keep swimming fresh and exciting for the next few years.”

The 29-year old Mellouli was the Olympic Champion in 2008 in the 1500 meters freestyle and in 2012 in the 10km open water swim. He also took a bronze medal at the 2012 Olympics in the 1500, making him the first swimmer to win medals in pool and open water in the same Olympic Games.
“Ous first trained with us last summer and Colorado and I immediately recognized that he was a tremendous addition to our program in terms of both leadership and performance,” his new coach Bowman said. ” We were thrilled when he chose to join us full time in December and we have spent the past several weeks helping him get back into a training rhythm.”

“As far as the training program, we have emphasized the IM, an area where he has had great success. Obviously,  he is spending time working in freestyle as well.  The greatest change in his total program is probably in the area of dryland training and conditioning here he is doing a great job. He has a tremendous attitude and is a pleasure to coach.”

Mellouli moved away from Tunisia at 15 to study and train in Marseille, France. He then moved to California to train with the USC Trojans after the completion of his secondary studies, and has now been there for the better part of a decade, including most of his international success. He has also done a lot of open water training with USC’s open water guru, Catherine Vogt.

He joins an incredible NBAC freestyle group that spans the distances; on the men’s side, it includes Olympians Yannick Agnel, Michael Phelps, Conor Dwyer, and Matt McLean, and on the women’s side includes Danish distance star Lotte Friis and American gold medalist Allison Schmitt.

Thinking the opportunity to train alongside MP must be an attractive prospect!

Also at NBAC are Tom Lushinger and Jessica Long, both prominent names. What a studded group.

And things are maybe looking ugly for Paltriniery Mcbroom Jaeger and others.. if Melouli keep up his endurance, the 1500m free podium is almost a lock of Yang Cochrane and Meloulli..

Agreed that Yang, Cochrane and Mellouli will look tough to beat, but McBroom & Jaeger are still improving … and let’s not forget Australian Mack Horton. What I see is faster times and deeper field ahead — what a great time to be a distance swimming fan.

Based on PB and Ages.. of the 4 I quoted.. I Would rate Paltrinieri the best to try for a bronze on 2016.. then Jaeger, Horton and Mcbroom on thar order..

Someone might show something amazing and catch Cochrane.. but Yang is probably unbeatable until 2016..