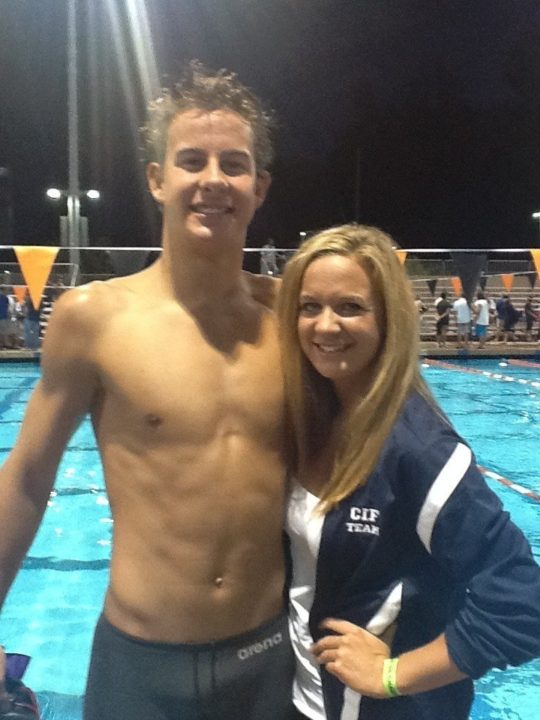 Dan Colella, the swimming and diving head coach at Duke University, announced their 24 student-athlete additions for the upcoming 2013-2014 season.

The future class of 2017 includes swimmers from multiple states and a diverse range of countries, the most diverse group belonging to the men’s team, including Evrim Ersu, Rahul Chokshi, and Adriaan Venter coming from Turkey, India, and South Africa, respectively.

The women’s team is bringing in women from all across the country, with swimmers like Liza Bragg from Connecticut, Brittany Friese from New York, and Colleen Wixted from Colorado, just to name a few.

Both the men’s and the women’s team will be gaining phenomenal swimmers, most of whom have competed at both National and International level meets.

Peter Kropp, from Los Angeles, California, will prove to be a strong breaststroke addition to the team, along with many other members of the 2017 class. Kropp’s personal bests in the 100 and 200 breaststroke are 54.64  and 2:01.58. Mike Seaberg and Dylan Payne will also play major roles in the strong breaststroke field for Duke. Other than diving, the Blue Devils have had their most recent success in the breaststroke group, where Piotr Safronczyk placed 15th at the 2012 NCAA Championships in the 100.

Michael Miller is another strong swimmer that Duke will be gaining. From Houston, Texas, Miller earned many titles, including All-Greater Houston Swimmer of the Year. is the state record holder in the 200 IM, and is a 2012 U.S Olympic Trials qualifier (400 IM) and a two-time U.S Open qualifier. His strength in the butterfly and the IMs will be beneficial to the team.

The women’s team will be very strong in their stroke diversity, but will be especially strong in their freestyle. Maddie Rusch from New Canaan, Connecticut is a three-time NISCA All-American, and is also a state record holder in the 50-yard freestyle. In the 50, she pulls a 22.78, and in the 100 and 200, brings a 50.33 and 1:51.50 respectively. Lindsay Schlichte and Colleen Wixted will also bring Duke a strong freestyle run.

Below is the full press release from today’s announcement. Congrats to the newest members of Duke University swimming and diving, and good luck!

DURHAM, N.C. – Duke University swimming and diving head coach Dan Colella announced Wednesday, June 12 the addition of 24 student-athletes to the program for the 2013-14 season. The class of 2017 includes swimmers and divers hailing from 10 states, as well as the countries of Bermuda, Canada, Great Britain, India, South Africa and Turkey.

“This is our largest incoming freshman class since I’ve been at Duke,” Colella said. “With every new recruiting cycle, the caliber of athlete just continues to get better and better. We have a very talented group coming in – the most talented group that we’ve ever had – so we’re very excited to see what they’re going to contribute to the program. Duke swimming and diving has done some great things over the past several years and made some real progress, and a class like this will help push us into the upper echelon of the ACC.”

The 24 incoming freshmen will join 16 returning letterwinners on the men’s side and 18 returning letterwinners on the women’s side from last season, including three-time NCAA platform diving champion Nick McCrory and All-ACC performers Hunter Knight, Lauren Weaver and Christine Wixted. The 2012-13 campaign saw both Blue Devil squads finish seventh at the 2013 Atlantic Coast Conference Championships, with the women breaking 14 program records and the men four at the championship meet.

Men’s Swimming and Diving Class of 2017

Joey Maginnis
Fly/Back/Sprints – Flourtown, Pa.
High School/Coach: La Salle College H.S./Frank Lichtner
Club Team: Penn Charter Aquatic Club
Prior to Duke: Four-time NISCA All-American in the 100-yard butterfly while also earning All-America honors in the 100 backstroke as a senior … all-state and all-league selection in each of his four seasons … broke a league record in the 100 backstroke as a senior … twice set a state record as a member of the medley relay team.
Personal Bests: 100 Back 49.87, 100 Fly 49.14

Michael Miller
Fly/IM – Houston, Texas
High School/Coach: Stratford/Mike Hoskovec
Club Team: Dads Swim Club
Prior to Duke: NISCA All-American in the 100-yard butterfly, 200 IM and the 400 freestyle relay his final year … captured state titles in three events, regional titles in four events and district titles in four events as a senior … named the Texas Swimmer of the Year, All-Greater Houston Swimmer of the Year, Region 7-4A Swimmer of the Year and 4A State Swimmer of the Year as a senior … member of the winning 200 medley relay at the state championships his junior season … state record holder in the 200 IM and as a member of the 400 freestyle relay … 2012 U.S. Olympic Trials qualifier in the 400 IM … two-time U.S. Open qualifier.
Personal Bests: 100 Fly 48.98, 200 Fly 1:47.73, 200 IM 1:48.97, 400 IM 3:53.04

Women’s Swimming and Diving Class of 2017

Colleen Wixted went to Cherry Creek, but swam for the Colorado Stars. Wonder how she felt about Missygate? Peter Kroop’s sister swam for Princeton, but transferred to USC. Duke’s been awesome in diving, but recently lost their coach. Why are they so mediocre in swimming?

Until renewed commitment to the program, many years of limited funding. Also, facility limitations.

Limited funding and poor facilities are part of the equation, but they also had poor coaching and leadership (on the swim side) until coach Colella started. He’s done wonders, and this is quite a class they are pulling in, especially on the guys side!

When you have a fantastic academic school to sell, you always have a chance to be a top 20 D1 program in near time. Duke is that and fits the most important piece of a puzzle: kids and their parents are always listening when there is a Duke education being discussed. They are pointing straight upwards now.

Joel kinda fleshed out what I was thinking-an excellent school with a national reputation who already excels in sports tied to upper-middle class families (golf, tennis, lacrosse) should be much better in swimming.

There are some very good club teams between Atlanta and Baltimore, and Duke could be significantly better if they got their fair share of that talent base.

Northeestern’s been discussed here in the past, but given that Vandy and Rice don’t even have men’s teams, Duke should be a lot better.