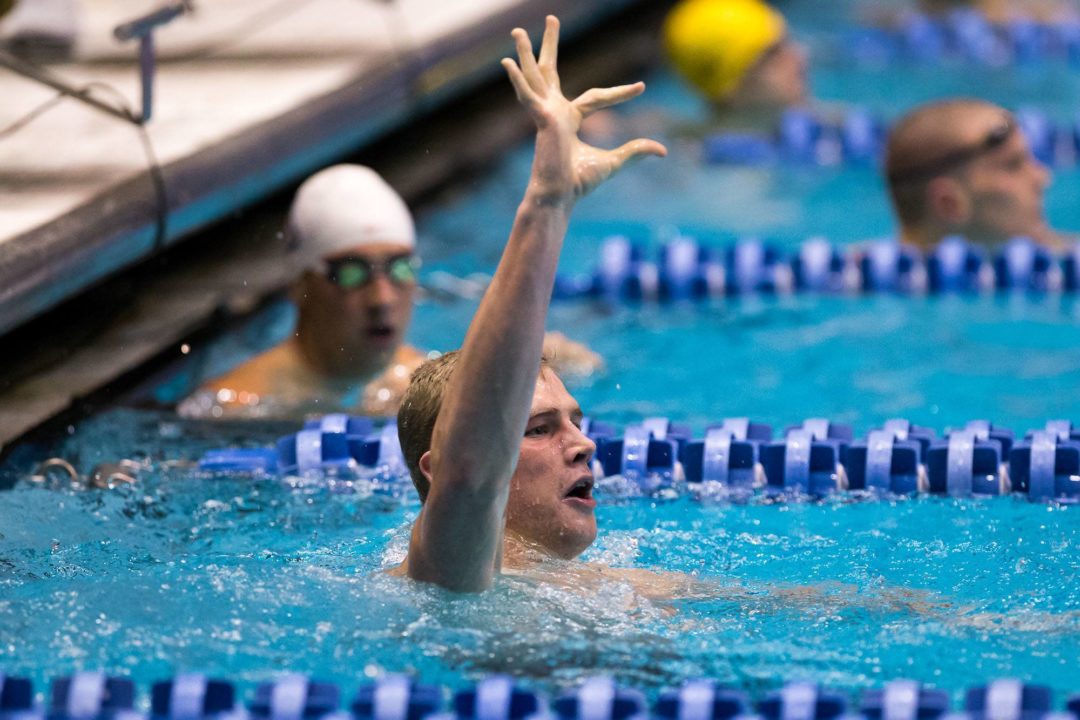 Arizona's Kevin Cordes is the most likely among the World University Games team members to be bumped up to the World Championships. (Photo: Tim Binning/TheSwimPictures.com)

There’s no actual new information in this post, rather we’ve been asked a few times for clarification on a certain subject relating to the World University Games, so we thought that we’d write a cited article on the subject so that everyone would know.

(Note the exception is that swimmers who are selected for relays only for the World Championships can swim both meets, though it seems unlikely that there will be any conflicts in the 100 and 200 freestyles, the only events that this would apply to.)

The full text of the rules are below, including declaration that May 31st was the deadline to alter the team:

E. To ensure that USA Swimming selects the best possible team for the most important FINA event of the year, the World Championships, all swimmers who qualify for the 2013 World Championship Team, regardless of whether such swimmer elects to accept the invitation to participate on that team, will not be selected to the 2013 World University Games Team, unless otherwise agreed in writing by USA Swimming.

A. Filling Vacant Team Position. If, for any reason, a position on the Team shall become vacant between the selection of the Team and May 31, 2013, such vacancy shall be filled as follows, provided, however, that nothing in this Section I.5 shall have the effect of bumping off the Team a swimmer who has already been selected to the Team (and who has not otherwise been removed from the Team)

The full roster of invited swimmers can be seen here.

In a wholly subjective fashion, here’s the top 10 swimmers (in order) we think are most likely to be moved up to the World Championship team, and in which events:

So in effect athletes that could compete in both are not able to unless excepted in writing, thus limiting their international opportunities to compete. And, USA is not going to afford other athletes an opportunity to gain international experience in instances where some WUG team members qualify for World Champs roster.

Yup, sounds like USA Swimming again. So much for athletes first advocacy.

I don’t know what the Brains at USA swimming are thinking but I’d love to know. Your senario is dead on and that will come into play. Too bad for those “bubble” swimmers…..sucks!

They really should give the new people a chance to compete internationally. It is very likely, in my opinion some of these people mentioned, expecially, Cordes and Romano will make the WC team. It is a waste if you are already counting on to pay for them then dont take a replacement.

USA swimming did contact potential alternates for WUGs and ask them to accept the invitation to be an alternate. They had to submit all requisite paperwork to be ready to travel to Kazan. Sounds like they are planning to take alternates.