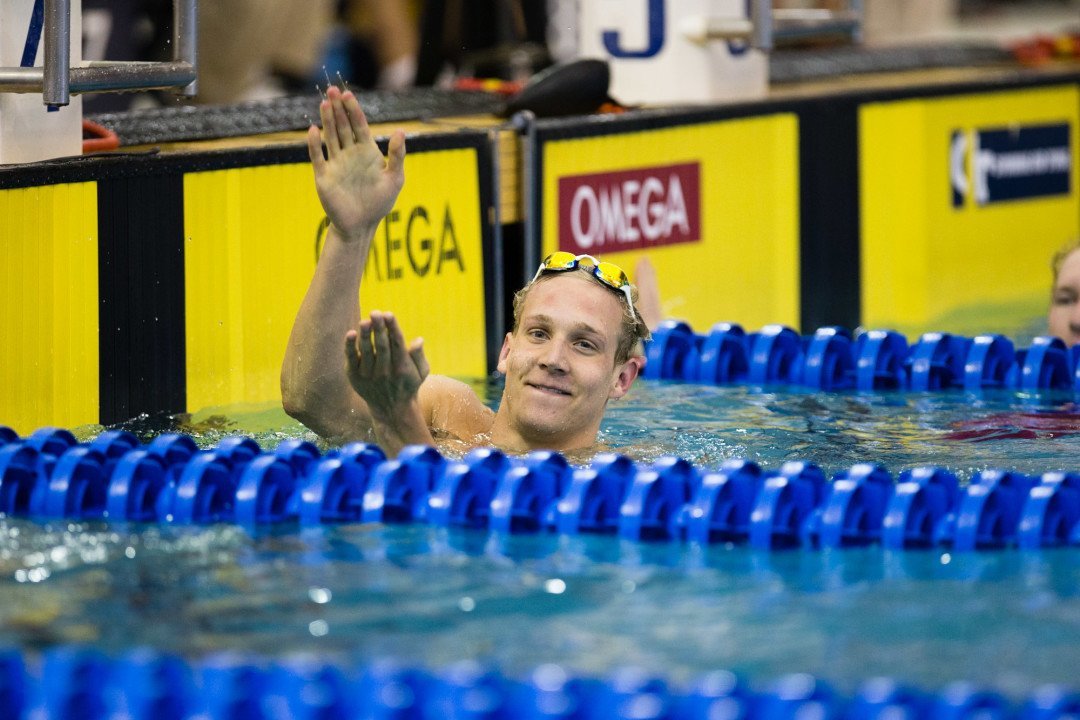 “I don’t think it’s any top secret he’s gonna swim the 50 and the 100 freestyles,” said Troy. “He’s qualified in the 100 fly, 200 free, and 100 breast. We’ll play around a bit with those." Archive photo via Tim Binning/TheSwimPictures.com

Coach Gregg Troy and Caeleb Dressel sat down for a press conference at the University of Florida to address the media about the upcoming U.S. Olympic Team Trials. One of the main points of interest was Dressel’s event program, and whether or not he would focus only on the 50 and 100 freestyle.

“I don’t think it’s any top secret he’s gonna swim the 50 and the 100 freestyles,” said Troy. “He’s qualified in the 100 fly, 200 free, and 100 breast. We’ll play around a bit with those. We’re training all of them because it’s kind of the whole wax that fits together, and we’ll make that decision when we’re about 8 to 10 days out. But there’s no doubt where the focus is.”

While Dressel’s best chance at an Olympic bid seems to be in the 50 and 100 freestyles, he has shown potential across several other events. One of the most viable events for him outside of the sprint freestyles would be the 100 fly. At NCAAs, Dressel scared Austin Staab’s American Record in the 100 yard fly, dropping his personal best time to a blistering 44.40. His long course best is a 52.96 from a Florida sectionals meet, though, so he’d have to drop from that to make it into the final.

Said Troy, “The 100 fly would be a tremendous event for him. I think he could do tremendously well but it backs up with the 50 freestyle I believe, so we have a little bit of a problem there.”

Compared to the 100 fly, Dressel is very likely to make the final in the 50 free and has certainly been in the conversation for an Olympic bid. Dressel won U.S. Nationals with a 21.53 last summer, and has continued to showcase his speed throughout the NCAA season, setting a new American and U.S. Open record of 18.20 in the 50 yard freestyle.

The 100 breast and 200 free seem to be less likely events for Dressel. He did add the 100 breast to his program at U.S. Nationals last summer, swimming a respectable 1:02.26, but that’s not on the same caliber as his other events. His 200 free best is a 1:48.64 from 2013 junior nationals. He may have an outside shot at a relay spot in that event, and Troy has expressed confidence in his 200 free potential.

“He’s real versatile. Unfortunately, this being an Olympic year, I don’t think we’ve seen everything he can do. Because we didn’t explore some of those other areas because his best skill set is speed at the moment,” said Troy. “I feel pretty certain that if he swum the 200 freestyle at the NCAA meet that he would’ve been outstanding. Probably every bit as good as the guys that won.”

Video of the press conference will be available shortly.

If the schedule suits him, no problem, the only thing bad for him would be having any of these extra races just before the 50 or 100 free finals.. where being tired could mean he being out of top 2 spots..

Tough call. 50/100/200, if he and his coach decide they need to limit the number of events. His chance of top 6 in the 200 is better than chance of top 2 in the fly. And although the 100BR is relatively weak for the USA, not weak enough for him to make the team in it.

Yes, I don’t think he’ll be able to beat, Phelps, Shields or conger in LC fly.

For reference, the 100 Fly and 50 Free finals are on Saturday, July 2nd. They are separated only by the women’s 800 Free. So it seems unlikely that he’ll do the 100 Fly/ 50 Free double. The 100 Breast starts with heats and semis on Day one of trials, Sunday, June 26th. Finals the following night. The 200 Free heats and semis are on Monday, June 27th. Finals on the 28th. And the 100 Free is on Wednesday, June 29th, with Finals on the 30th. So I wouldn’t be surprised if he tried his luck with the 100 Breast, if nothing else to get that first swim out of the way. And if he wanted to give the 200 Free… Read more »

6
0
Reply
Swimmer A
Reply to  Swimmer A

I would be interested to see what he could do in the 2 Free. I believe Greg Troy when he says Dressel could challenge the guys at NCAAs in that event. That 1:48.64 is from 2013, he can definitely go faster.

7
-4
Reply
Rafael
Reply to  Swimmer A

He would need a huge PB to final for 100 fly.. and if he gets tired it could be fatal.. he could go a 21,4 rested than tired he goes something around 21,8… it is just enough for Schneider or someone else get the 2nd spot..

Schneider pulls off the upset and wins trials

I was gonna say that the IOC needs to look into changing the event schedule somewhat in 2020 so the 100 fly and 50 free don’t line up. Though surprisingly it doesn’t seem to be as common of a double in long course as in short course (maybe because the NCAA makes sprinters do something on day 2). Who was the last guy or girl who was world-class in both those events in long course? Matt Biondi comes to mind, but that was ages ago.

I think the schedule is different for women

We’ll probably never know, because of the schedule.
Michael Klim, Roland Schoeman, Amauey Leveaux, Fred Bouquets, even Ian Crocker – they all had to choose to focus on one or the other