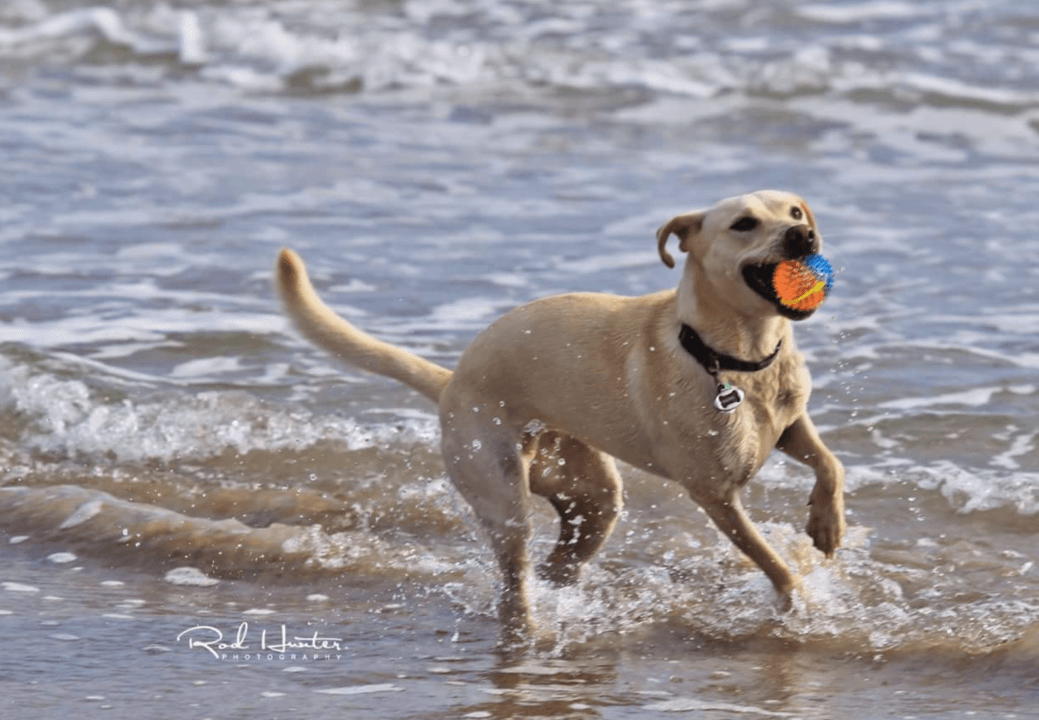 Open Water Planet CEO Bobby Brewer: They call her the “Michael Phelps of Yelps; the “Tony Stark of Bark.” Everyone knew she was the favorite going in. Current photo via Rod Hunter / OWP

A slight threat of rain loomed at the first annual Open Water Planet Ruff-Water Swim Finals on Saturday. But the competitive drive took precedent as the contest grew near.

World-class ruff-water patron Nadine watched as her handler motivated her with a shiny new tennis ball, waiting for it to be thrown out in the water. And then came the moment of truth. The starters voice sternly gave the instructions. As the contestants lined up at the starting line the tension in the air was as thick as peanut butter on a kong toy. Then the starting gun exploded and off they went, racing across the the beautiful beach race-course into the blue-green waters of the South Padre Gulf of Mexico.

A wide-eyed crowd of fans stood clapping and cheering for the local crowd favorite, Nadine. “We knew this was just a matter of execution for Nadine, said Open Water Planet CEO Bobby Brewer. They call her the “Michael Phelps of Yelps; the “Tony Stark of Bark.” Everyone knew she was the favorite going in.”

Once they hit the water Nadine gracefully yet swiftly grabbed the ball and ran back to the finish line with an undeniable lead, even taunting her competitors by stopping and shaking off the excess water before crossing the finish line; A showboat move? Yes. But when you’re that far ahead of the competition in the heat of the moment and your a pack animal with the instinct to constantly establish your dominance, can you really blame her? Our congrats go out to Nadine as this was a record breaking performance and she truly deserved the win.

Tying for first place in the featherweight division were Rocky and Bandit. An amazing team of terriers ready to show their true dominance on their home course. Finishing off the races with the final heavyweights were Panda being a mix and Casey being an Old English Sheep Dog. These two really lit up the show with their true showdogship.

“It’s very important for Nadine and all these dogs to be in great physical shape,” her wonder says. “She’s competing against male dogs that are bigger and stronger than she is. She’s half their size at best , so we have to make sure she’s in tiptop shape.”

She is explosive and she is agile. I don’t think she can be beat. She may be the greatest of all time.

As for next year’s Ruff-Water Swim here on South Padre Island, Nadine automatically qualifies to vie for a second National City Champion of the World. She will continue to train in anticipation of the talk that next years ruff-water swim could very well be THE World Championships of the World.