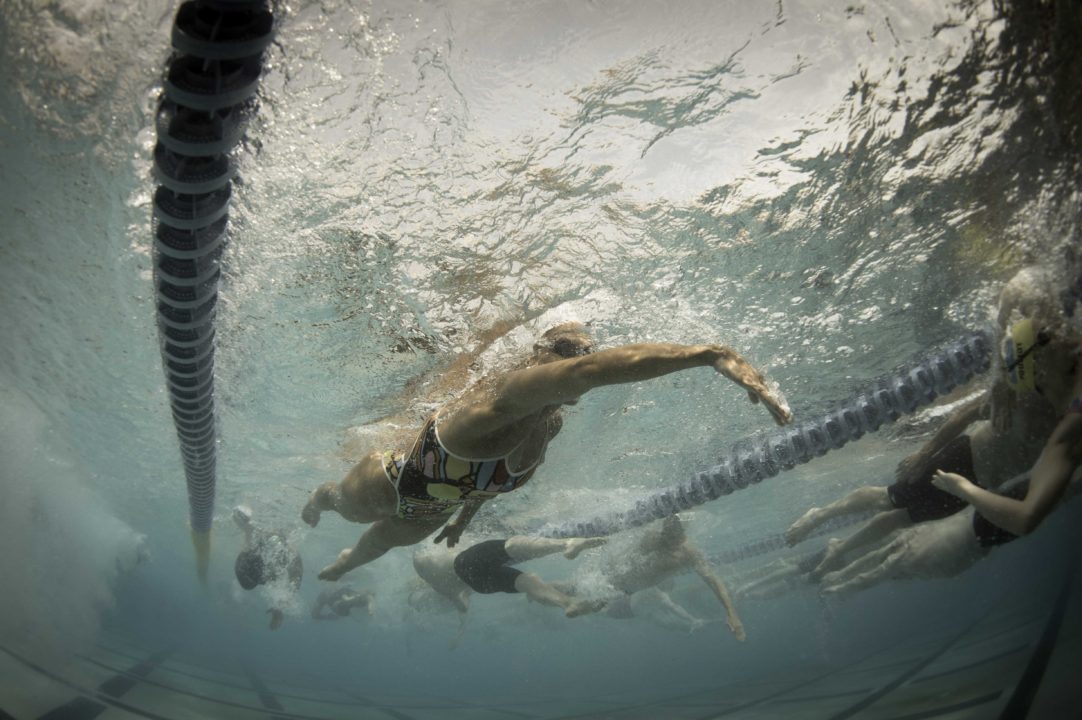 USA Swimming used underwater cameras to review all DQ calls made at the 2014 U.S. Nationals, and the founding nations of the Pan Pacific Swimming Championships agreed to do the same in the Gold Coast. Archive photo via Mike Lewis/Ola Vista Photography

Last year, a rule that would allow officials to use underwater video cameras in determining disqualifications was voted down, with many citing the perceived high costs as justification.

Despite that, USA Swimming pushed forward in 2014 with a video replay system that they’ve been using since 2007, and took it with them to Pan Pacs.

According to Assistant Executive Director Mike Unger, this summer was the 8th summer championship at which USA Swimming has used the underwater camera system to some extent – dating to a trial run in 2007 to prove the concept, and official usage beginning in 2008 at the Olympic Trials.

In addition, this was the second-straight Pan Pac Championships at which the technology was used.

The USA Swimming system is not a full-blown, every race, every stroke system, as Unger explains. Rather, the system can only be used to confirm or overturn a call that has already been made by a deck official.

When an official sees what they believe is a disqualification, they use their radio headset and call it into the review both or room. Officials in that room then pull up the video of the alleged infraction, and can either confirm it or deny it. The process typically happens immediately, and if the believed disqualification happens early in the race, it is often confirmed or overturned by the time the event finishes.

USA Swimming has contracted a company based out of Pittsburgh called DV Sport to run the cameras. Each camera covers two lanes, and are placed every 4-5 meters along the bottom of the pool. In addition, a small camera is set up on each side of the pool to enhance the ability to call violations of the 15-meter underwater rule.

Next year, Unger says that USA Swimming is planning to use the system at Junior Nationals in San Antonio as well.

Unger says that using this system provides many advantages, and that it “has saved” quite a few athletes from unjust disqualification.

“In Omaha in 2012, just over 20 calls were overturned,” Unger said, out of about 50-60 calls made. In this sense, having the technology at a national selection meet can only serve to benefit USA Swimming overall – under current FINA guidelines, it can be used to keep a swimmer on the team, but can’t be used to take a swimmer off of the team who might win a medal when they move on to international qualification.

Other times, it will uphold a controversial call, as is what happened in Australia two weeks ago.

“In Gold Coast, Tom Shields was disqualified for a bad touch at the 100m mark of his 200m fly,” recalled Unger. “The call was reviewed by video and was upheld. I was invited by the lead official (Dan McAllen) to view the video, and, in my opinion, the officials made the correct call.”

Unger says that often times, watching the video, there are many calls that are missed by officials that can be seen fairly obviously underwater, and that this can cause some “frustration.” On the other hand, even those missed calls provide a learning opportunity for coaches, athletes, and officials.

“There have been a few occasions where DV Sport has been able to clip off video to give to an athlete/coach so that they can see that something is wrong with a kick, even though the DQ call was not made,” Unger says.

He says that within USA Swimming, there continues to be a lot of debate over this system, and whether or not it should be able to initiate calls, in addition to confirm calls made on deck, but in general, USA Swimming continues to support the video system with DV Sport because “they feel it is the right thing to do.”

I had no idea USS was using a video system like that! I think it’s terrific, but personally I agree that it should not be used to catch DQ calls, only to confirm/overrule them and to educateathletes/coaches like they are doing now (unless FINA makes them mandatory).

FINA is really pathetic about these stories of video.