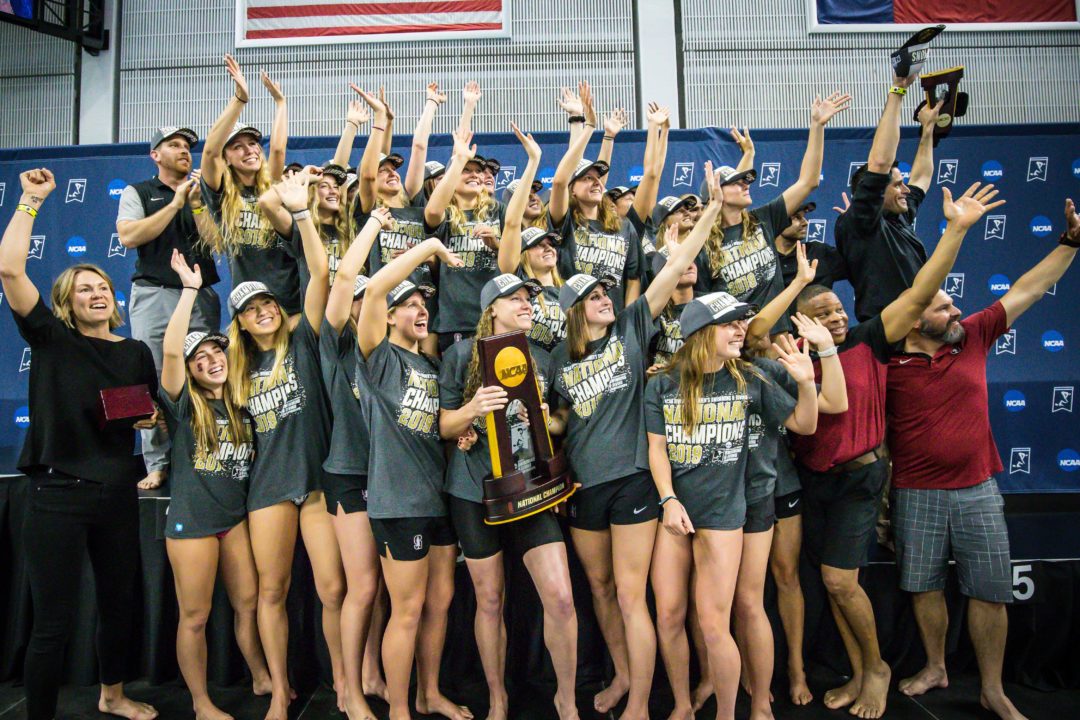 The women of Stanford - three-time defending NCAA champions - have released their schedule for 2019-2020, including a Feb. 15 dual with runners-up Cal. Archive photo via Jack Spitser/Spitser Photography

The women of Stanford – three-time defending NCAA champions – have released their schedule for the 2019-2020 season, including a stop at the Art Adamson Invite and a Feb. 15 dual with Cal.

Stanford has a relatively light fall schedule and doesn’t travel until mid-November. The Cardinal are staying very close to home, with only two road duals on the schedule, both in the same weekend swing through Los Angeles. That comes on January 31 and February 1, with a Friday dual against UCLA and a Saturday battle with USC.

The fall features just two true dual meets: Oct 12 against Arkansas and Oct 23 against Washington State, with both meets taking place at Stanford. The Cardinal will swim a late alumni meet on Oct. 25 before their mid-season rest meet, the Art Adamson Invite at Texas A&M. We’d previously confirmed that Stanford would be returning to the Art Adamson Invite; a schedule change in that meet last year forced Stanford to make a switch to the Ohio State Invite.

The marquee matchup is the final dual of the regular season, with Stanford hosting California, the runners-up to Stanford at each of the past three NCAA Championships. That meet comes in very close proximity to the Pac-12 Championships, though, so neither team will likely be very geared up for it. Still, it should be a late highlight of the college dual meet season.

Not a tough travel schedule for dual meets. Will allow them to train through