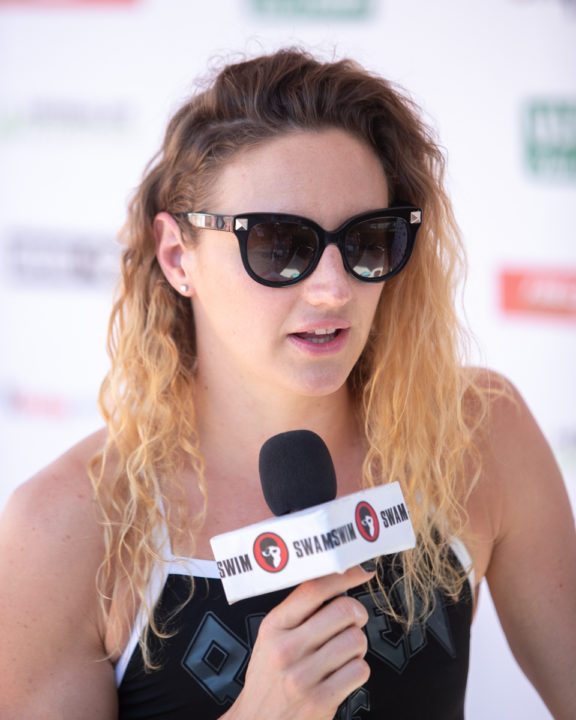 1. Freya Anderson was shocked. But happy.

“I’m shocked and happy. I didn’t expect the medal in this event. I feel so tired now but it’s been amazing. I know there were big names in this event but big names don’t win races and I just wanted to compete with this great swimmers.” The 18-year-old British swimmer got the job done with focussing on her own 100m freestyle race race. Way to go!

“I’m very satisfied, I think I’ve bettered our national record. The race was tough, the other girls came so fast and I thought I couldn’t make it so I’m really happy for this gold.” said the Italian after she improved again an Italian record and earned the gold medal in the 200m backstroke.

3. Andreas Vazaios wanted the European record. And he got it.

“I wanted to do the European record so I’m so excited now. It was so hard and I really wanted to win this. This represents all my hard work and dedication, which has just paid off. I want to thank this to my family and my coaching staff for always being there for me.” The Greece swimmer showed an amazing performance with setting a new European record in the 200m IM in 1:50,85.

4. Katinka Hosszu always loves racing and a tough battle for the win.

“That was something you could kind of expect from this race. I love racing so I enjoyed this battle very much.” The Hungarian Iron Lady managed her first challenge of the evening well and was crowned with the European SC title in the 200m butterfly. But there was more to come.

5. Kliment Kolesnikov wants to go faster in the relay.

“I feel tired, that’s cool and I’m happy with the result. I think I can go faster, I don’t think I’ve reached my limit today. I don’t like to talk about times but I’m sure I’ll go faster in the relay.” But first he grabbed the gold in the 100m backstroke. The Russian backstroke ace sets his goals high.

“Wow, that was fun! And it’s an honour that I could win Hungary’s 1000th medal at big championships since 1896. Obviously, this had to be a gold so I’m really happy to win this race. This 57.3 makes me pretty satisfied because I’m anything but fast now in the middle of heavy trainings but after so many years spent at this level I kind of know that in a final like this I have to step up and indeed I step up.” The 30-year-old won her second title tonight in the 100m IM. And a historic 1000th medal for her home country.

“I didn’t have a plan for today’s race. It was quite difficult, I haven’t swum since the World Championships. But then this field all came together with great rivals, so it’s a great feeling to be European champion once again. The race was tough, very tough. Yesterday I felt better in the heats, today I didn’t have the same feeling but then it’s a final, tensions are in the air and that’s how finals look like. All in all, I’m quite satisfied.” The 2016 Olympic Champion took the victory in the 1500m freestyle. And it is always a pleasure to hear the Italian national anthem.

“I feel good, I wanted this gold. Race against Manaudou is always motivating and now the mission is accomplished. I wanted to break the world record but I’ve come a bit short. This is my fourth final and my fourth gold here so I’m really happy. I’m ready and prepared for racing a lot, we’ll see how the 100m will go tomorrow.” The 27-year-old was on fire but always stayed cool. Especially in a splash-and-dash race like tonight’s 50m freestyle.

9. France and Netherland together on top of the podium. 8 happy women.

Anna Santamans, France: “It’s just like a dream to win a gold medal upon my comeback. I heavily injured my shoulders and it took me two years to recover.”

Tamara van Vliet, Netherlands: “It feels really great. We all wanted this gold really badly because two years ago we had won and we wanted to repeat that.”

When you look at the picture what is the first thing that caches your attention? It answers many questions.

I don’t get what you are trying to say?

Do you know what symbiosis is? Swimswam is a business first of all and any business requires advertisement.