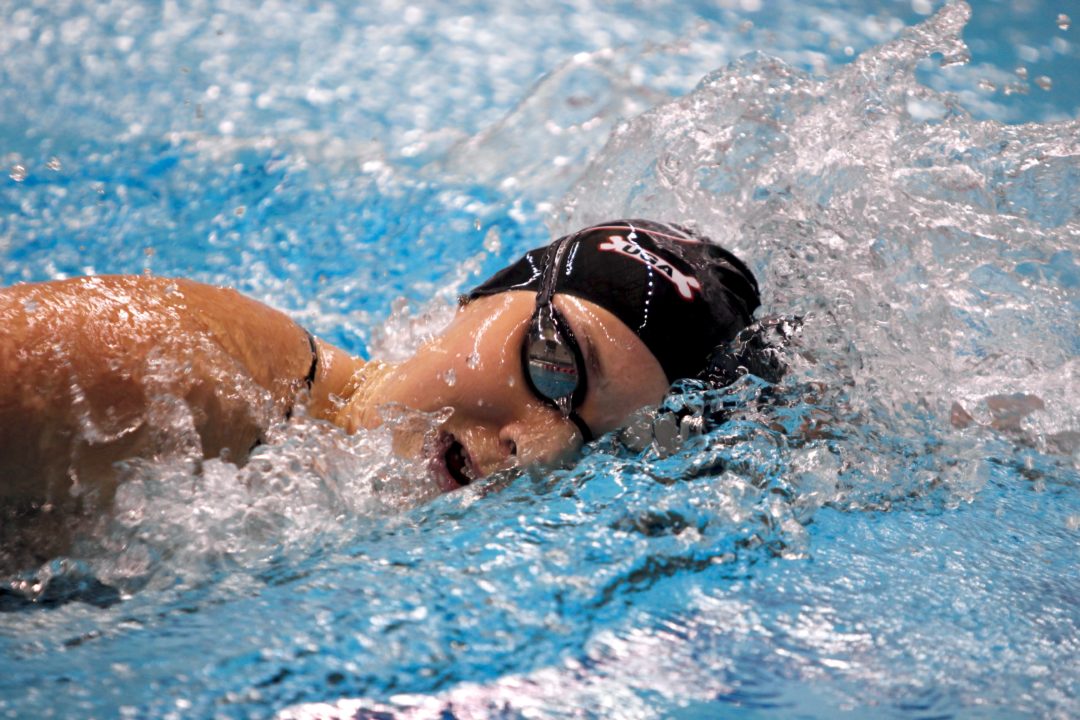 Brittany MacLean leads a pack of 4 Georgia Bulldog women in the A-Final of the 500 free heading into tonight. Archive photo via Shanda Crowe, shandacrowe.weebly.com

After prelims on the first day of individual racing at the SEC Championships in Athens, Georgia, the major team races are already starting to become apparent. The Bulldogs are right in the thick of things for both genders in their home pool, looking like the best-set-up women’s team going into tonight’s finals, and right in the middle of a tough trio of men.

Here’s our layout of how many swimmers each team has “up” (in the A-Final), “mid” (in the B) and “down” (C Final) for tonight’s meet, which scores all three heats, through 24th place.

The Georgia women have 9 A-Finalists, the most of any team, including multiple finalists in every event. They loaded up the championship heat of the 500 free, the very first event, sweeping half the spots in the A final, which should be a nice way to kick things off in the individual events. Florida had a solid day themselves, matching Georgia in depth, but not catching quite as many A finals – they sit with 7. Texas A&M just about matched Florida this morning, with the biggest difference being one less A-Finalist (and three less than Georgia). Of course, with the biggest points up for grabs in the A heat, those extra “ups” should provide a substantial advantage to Georgia, which already holds a 34-point lead over Tennessee.

Speaking of the Vols, they struggled some this morning, only putting a single swimmer in an A Final for tonight. This only accounts for three events over the course of a long meet, but Tennessee will have its work cut out for it to try and keep afloat in the team race tonight.

Florida look to have set itself up best of the men’s programs, putting 7 swimmers up. Georgia should be able to make up some of those points with depth (5 B-Finalists) after a solid morning, but they’re already quite a ways behind the lead pack in the team points after last night’s relays.

Auburn went from a very middle-of-the-pack morning to being a major force by putting 4 guys up in the 50 free. That’s long been Auburn’s signature race, and with 6 swimmers seeded in the top 15, they should put up plenty of points there tonight, and be buoyed even further by the 200 free relay at the end of the session.

These numbers don’t reflect 1-meter diving, prelims of which are happening this afternoon and will also factor into tonight’s points totals.

Wow, this is gonna be a good few days of swimming… I think we’ve got legitimate 3 team races in both meets. Exciting stuff.