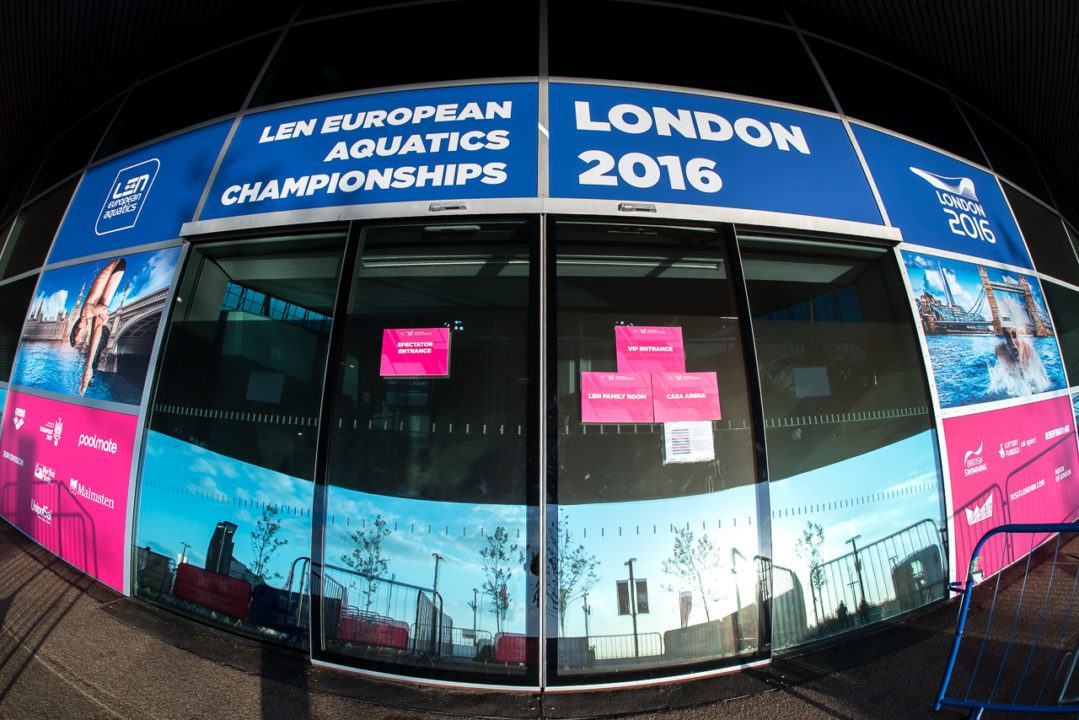 The 2018 version of the European Championships will feature many other sports other than aquatics, such as gymnastics and athletics. Archive photo via Peter Sukenik/www.petersukenik.com

What Is Adam Peaty’s Top Speed in Breaststroke?

World Record holding breaststroker Adam Peaty took to the flume in Tenerife for some max-speed racing. How fast did he go?

British Swimming Chief Executive David Sparkes had high praise for the delivery of the 2016 European Aquatic Championships held in London over the past two weeks, and looks forward with excitement towards the next championships to be held in Glasgow.

The two week event wrapped up on Sunday, the culmination of three years of planning after the city was awarded the event back in 2013.

“Once again Great Britain, through our key funding partner UK Sport and key stakeholders, have delivered a world class event in what is an iconic venue,” said Sparkes.

“I would like to thank and congratulate all of those involved in putting on this fantastic event. From the organizing committee to every single volunteer, all have played a valuable role in delivering and inspiring Europe’s greatest athletes,” said Sparkes.

The swimming portion of the 2018 addition will be held at Tollcross International Swimming Centre in Glasgow, but the competition as a whole will have a much different look than in the past.

All but athletics will be held in Glasgow from August 1st-12th, with athletics being held in Berlin from the 7th to the 12th.

“British Swimming is delighted to be working once again in partnership with Glasgow City and Scottish Swimming on this ground breaking project,” said Sparkes.

“This innovative event builds on the success of the Glasgow 2014 Commonwealth Games and we believe will change the face of European sport competition for decades to come. It’s an opportunity to showcase swimming alongside other sports, and to recapture the magic that we all experienced in the summer of 2014.”

“The 2018 European Championships are all about protecting the rich history and heritage of the existing individual sport championships while making them stronger for the future. These events represent the crown jewels in our event portfolios and will be carefully nurtured.”

“One of the key reasons why the sports have come together is to benefit from the powerful upside of aggregation, for example in the form of a higher profile and reach through our EBU partnership, the ability to create the best possible stage for our athletes to compete on, as well as enhanced long term financial security” added Sparkes.

No mention of the European Masters which is a complete and utter shambles, shameful and disrespectful to all the swimmers who made their way from all over Europe to Stratford to compete in the Olympic Pool. 50% of whom raced in the training pool, their families and team mates missing their swims, in fact some of the swimmers missed their swims cause they couldn’t even get in!!…the word queue has a whole new meaning… to come in, go out, warm up (10 min slots) there’s so much more, but don’t want to be ‘negative’ lol. time for Masters to break away and do their own thing. They’ll get more respect.

The comments are about the élite Championships not the masters. The latter are Unfortunately of no interest for media

You make a good point. I don’t think I’ve ever seen Masters mentioned outside of swimming areas of the internet. A big shame and disrespectful to the swimmers. Not to mention… imagine how many Masters-aged people (literally above 18, no?) would engage in sports if they saw this kind of thing on TV.

This completely ignores the Masters section of the event which ends on Sunday.

How can he say the event has finished, when the Masters event hasn’t even started yet! The organisation of the European Masters Championships has been an absolute shambles…