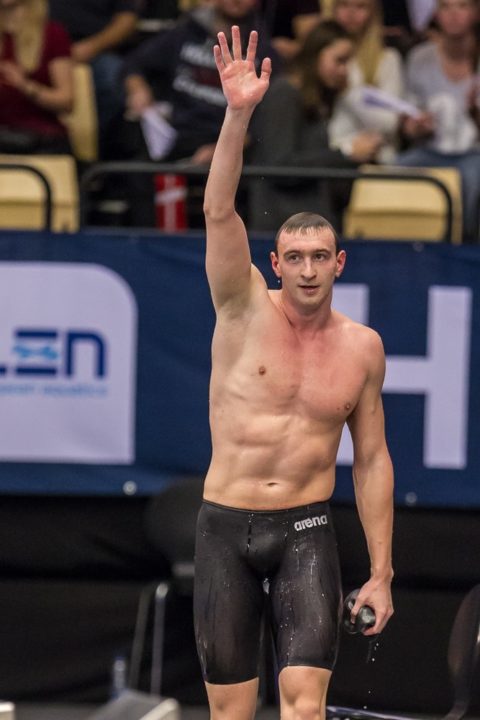 The Russian short course nationals kicked off in Kazan, Russia this evening with a fast start to the five-day competition. Archive photo via courtesy of Jesper Nielsen, www.sttfoto.dk

The Russian short course nationals kicked off in Kazan, Russia this evening with a fast start to the five-day competition.

The men’s 200m freestyle final was the first event and to no surprise it went to Danila Izotov. Izotov touched the wall in 1:41.94 ahead of Michael Polishchuk who grabbed the silver with a time of 1:43.91. Behind him was Andrusenko Vyacheslav in 1:43.99.

The women’s 50m breaststroke semis followed suite, and Natalia Ivanova took the top seed with a 30.54. Behind her was Valentine Artemyev in 30.74 followed by Marca Astashkina. Astashkina is the Russian youth record holder, holding the mark at 31.24. She was close to that in semis touching the wall in 31.26.

Stanislav Donets was the leader in the hunt for the 100m backstroke gold, taking the top seed in the 100 back semi-finals.

In the women’s 200m fly final it was Veronika Popova who came out on top with a 2:06.94 to come very close to her own Russian national record of 2:06.88. She finished well ahead of second place finisher Daria Shmakova who touched in at 2:09.87.

Andrey Nikolaev who finished fifth at the European Championships in the 50m breaststroke took the third seed heading into finals with a time of 58.05 in the 100m breaststroke. Leading the way was Oleg Kostin who took the top spot with a swift 57.17.

Following the 100m breaststroke semifinals was the women’s 100m backstroke semifinals where the fastest time went to Polina Lapshina. Lapshina took the top spot with a 58.85, being the only swimmer under 59 seconds as Catherin Tomaszewski took the second seed in 59.11.

The men’s 100m fly semifinals were lead by Eugene Korotbiskyn who swam a 50.99 to grab that top spot. Following him was Sergei Fesik in 51.25 and Eugene Koptelov in 51.34.