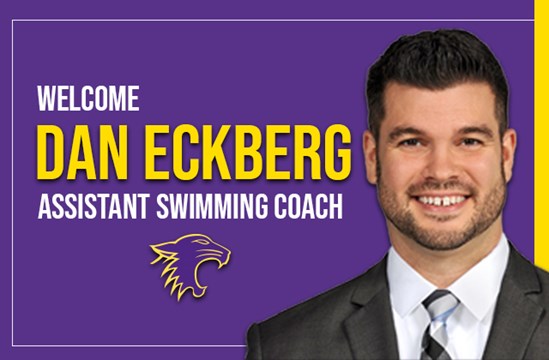 Eckberg comes to St. Kate's after taking time off from the coaching world following a successful career at the College of Saint Benedict. Current photo via St. Catherine Athletics

While at the helm for the Bennies, Eckberg’s athletes registered 14 program records, earned seven MIAC All-Conference honors, and placed 84 performances on the program’s top-10 list. The Bennies were named to the College Swimming Coaches Association of America (CSCAA) Academic All-American team each semester during his tenure and seven student-athletes from Saint Ben’s were named MIAC Athlete of the Week. In the 2015-16 season, Eckberg led the Bennies to a fifth-place finish at the MIAC Championships scoring a total of 326 points, their highest point total under his leadership. In addition to his coaching responsibilities at Saint Benedict, Eckberg was the pool coordinator and was the Bennies head strength and conditioning coach since 2017. Prior to the 2019-20 season, Eckberg resigned after six seasons to spend time with his young family and complete a Master of Science degree in Higher Education Administration at Saint Cloud State University.

Zook shared, “I had the privilege to watch Dan coach for several years and his energy and passion for the sport of swimming and his student-athletes was always apparent. After taking the past year to get to know Dan, and speak to him about what this might look like I realized his experience recruiting and coaching within the MIAC is exactly what we needed to talk the next step as a program. Having his energy at practice and detail oriented thinking really is a blessing for this upcoming season given our extended time on deck some days. I am glad this opportunity for Dan will allow him to come back to the sport of swimming and still get the ability to prioritize being home for his family.”

Before taking over the then-Blazers in 2013, Eckberg served as the head boys’ and girls’ swimming and diving coach at Saint Cloud Technical High School in St. Cloud, Minnesota where he coached his athletes to 27 school record-setting performances and multiple participants at the Minnesota State High School League Championships.

“Justin is not only a great recruiter of student-athletes, he is a great recruiter of coaches who stepped away but still has a passion for the sport”, said Eckberg. “After spending just one week at practice it has been apparent that the dedication and effort the team has put in is the reason why this team is so successful.”

“I have been blown away with the effort in the water, weight room, and in the academic realm. I was wondering if I was going to learn some secret to their success, but the secret is really just a strong work ethic and high standards for achievement. I look forward to being part of their journey and being a resource as we try to repeat the success from last year.”

Zook finished with, “One of the big parts for bringing someone on board was making sure they believed in what we are trying to accomplish in the short and long-term. After speaking with Dan initially, I shared the vision and goals for the program. His response made it clear he was the right coach to bring on, as he  just wanted to know when we could get started! Dan’s comments about how this program was built is completely accurate and our hope is nothing about the hard work changes moving forward. I am glad he kept some of the other secrets to himself though!”

Eckberg resides in Cottage Grove, Minnesota with his wife Mary and two young children Genevieve (2) and Harrison (1). He is currently a sales representative at Thomson Reuters in Eagan, Minnesota, and is completing a Masters Degree in Higher Education Administration from St. Cloud State University.