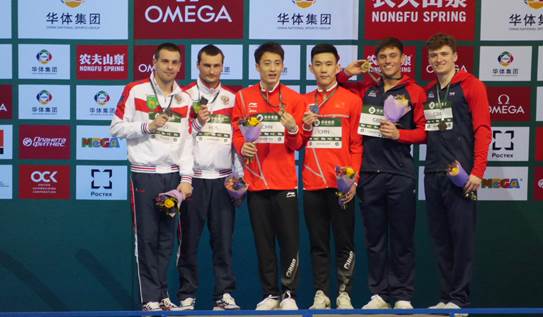 Tom Daley and Matty Lee returned to the podium at the penultimate leg of the FINA Diving World Series in Kazan as they claimed the Men’s 10m Synchro bronze. Current photo via British Swimming

Tom Daley and Matty Lee returned to the podium at the penultimate leg of the FINA Diving World Series in Kazan as they claimed the Men’s 10m Synchro bronze.

After winning their first international medals as a pair two weeks ago in Canada, Tom Daley and Matty Lee picked up where they left off in the Russian city of Kazan. A solid opening three rounds saw the new pairing sitting in third position, and despite a slight slip in the fourth round they produced a solid final two efforts to secure the final podium spot.

A fifth round Reverse 3 ½ Somersault Tuck (307C) saw the London pair land 81.60 points, one of the best dives of the competition, to secure bronze medals with a total of 395.82 points.

“The placing was good and we’re happy with a bronze medal, however we both could have dived a lot better. A few of the dives in there were good,

but there were a few that weren’t so great. The Russian’s are some of our main rivals and they managed to get us this time, but it’s their home pool and we’re back in our home pool in London next week so we’ll be bringing our A game.

“I’m really excited to be in front of home crowd again – I’ve done it before and by far the best World Series is in London. I think Tom and I will thrive off the vibe, so we’ll look to fix a few things and go for it.”

“We’ve got some sharpening up to do but we’ve got a week before we get to compete in front of a home crowd in London. First though we’ve got the individual event and the mixed synchro here in Russia, so hopefully we’ve got some more good performances to come.”

Less than 38 points separated all six of the finalists in the Men’s 3m Synchro, with the British duo of Jack Laugher and Dan Goodfellow placing fifth after six rounds of diving was complete.

Laugher and Goodfellow started strong, ranking consistently and firmly in the hunt for the medals with their highest scoring dive coming in the third round, they scored 81.90 points for their Reverse 3 ½ Somersaults Tucked but then moved out of medal contention and down the board after dropping their penultimate dive.

The pair finished fifth overall with a total of 385.62 points, with the gold, silver and bronze claimed by Ukraine, Russia and Mexico respectively.

Also in fine form in the opening session were young pairing Eden Cheng and Lois Toulson, who have only be a partnership since last summer, where they scooped a surprise European title. Having been growing in confidence on the world stage this year, Cheng only making her debut in Japan in March, the pair equaled their personal best performance in Russia with a fourth place finish.

Fighting for bronze throughout, the pair nailed their fifth and final dive, a Back 2 ½ Somersault 1 ½ Twist Pike (5253B) to end the competition on 284.28 points.

Grace Reid and Kat Torrance brought the opening day’s action in Kazan to a close for the GB, the pairing took to the 3m Springboard for the Synchro event and also placed fifth at the end of the final with a points total of 270.63.

Full results from Kazan can be found here.

Tickets for the final leg of the FINA Diving World Series, which takes place in London from 17-19 May, can still be purchased here.

Lmao , Bronze & they are the stars of the article .