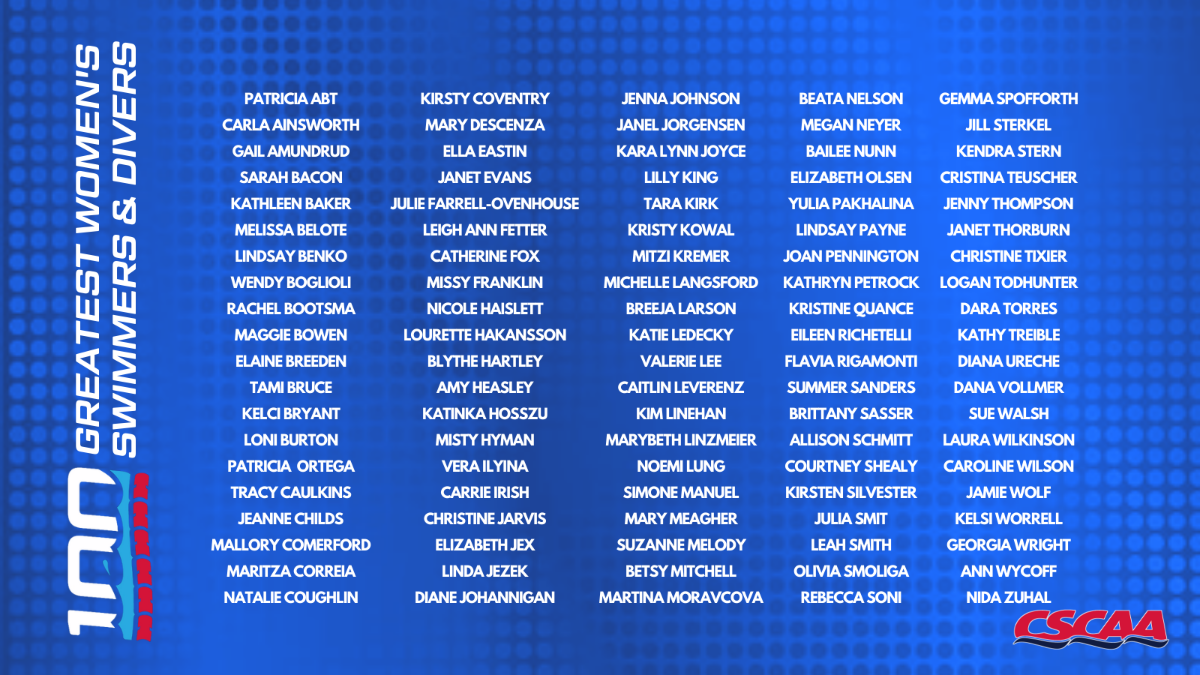 87 swimmers and 13 divers were selected, hailing from 28 states and 13 countries. Current photo via CSCAA

A total of 642 titles. That is the number of individual NCAA and NAIA championships won by members of the College Swimming & Diving Coaches Association’s (CSCAA) 100 Greatest Swimmers & Divers of the past century. The selections were made as a part of the CSCAA’s 100th year celebration.

Nearly three thousand athletes were nominated, with blue-ribbon panel of current and former college swimmers, coaches, and members of the media making selections from a list of 973 finalists. Eighty-seven swimmers and thirteen divers were selected. They hail from twenty-eight states and thirteen countries. Highlights of the selections include 12 members of the International Swimming Hall of Fame and 59 Olympians.

The CSCAA’s 100th birthday celebration will continue with upcoming announcements recognizing Centennial MVP’s for each team along with a listing of the 100 Greatest Coaches, 100 Alumni of Impact. The anniversary will culminate with the Association’s convention and awards banquet, May 2-4, 2022 in Rosemont, Illinois.

The CSCAA100 list of Greatest College Swimmers and Divers is listed below in alphabetical order. For profiles on each selection visit www.cscaa.org/cscaa100.

2 individual NCAA titles and not a lot of big relay contributions.

Great swimmer for sure, but there’s a handful of others omitted who I think are on the list in front of her.

Multiple NCAA titles
NCAA Swimmer of the Year
Broke Janet Evans’ 18-year old NCAA record in the 500 free, which was the oldest record on the books
Won the Honda Sports Award for Swimming

How did they leave Caroline Burckle off this list?

That’s stupid. How is the list considered accurate then

They should’ve done a separate list for diving rather than include them among the swimmers.

How does Breeja Larson make the list with 2 NCAA title’s over someone like Jessica Hardy who had 4?

I got all the way to the last column before I saw “Dara Torres”. Okay, I was getting worried there for a short bit, but now I’m happy. All the other names on the list are impressive, but yes, Dara Torres — that is all.

You do know it was in alphabetical order.