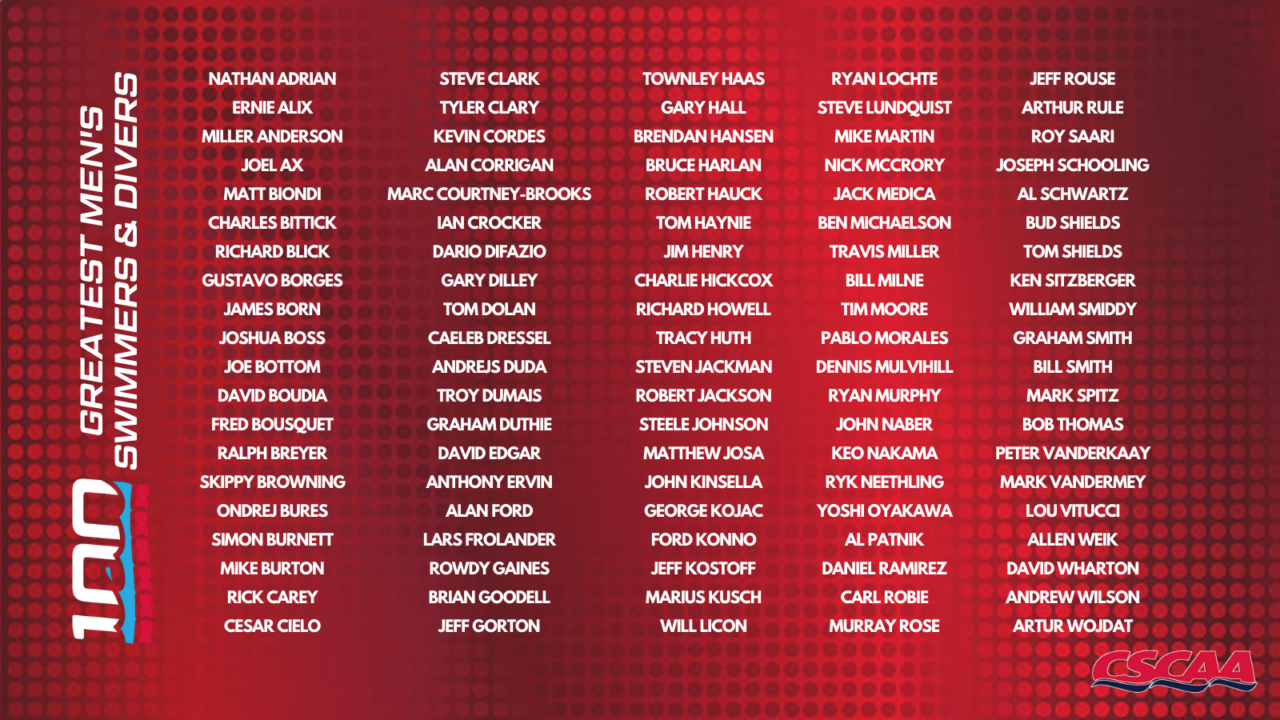 The selections were made as a part of the CSCAA’s 100th year, with the men's top 100 combining for 627 national titles.

Colorado Springs, CO — A total of 627 titles. That is the number of individual NCAA and NAIA championships of the College Swimming & Diving Coaches Association’s (CSCAA) 100 Greatest Men’s Swimmers & Divers of the past century. The selections were made as a part of the CSCAA’s 100th year.

Nearly three thousand athletes were nominated, with blue-ribbon panel of current and former college swimmers, coaches, and members of the media making selections from a list of 973 finalists. Eighty-six swimmers and fourteen divers were selected. They hail from twenty-eight states and thirteen countries. Highlights of the selections include 12 members of the International Swimming Hall of Fame and 59 Olympians.

The CSCAA’s 100th birthday celebration will continue with upcoming announcements recognizing Centennial MVP’s for each team along with a listing of the 100 Greatest Coaches, 100 Alumni of Impact. The anniversary will culminate with the Association’s convention and awards banquet, May 2-4, 2022 in Rosemont, Illinois.

The CSCAA100 list of Greatest College Swimmers and Divers is listed below in alphabetical order. For profiles on each selection visit www.cscaa.org/cscaa100.

You have two of the big three from UT. Why is Aaron not on the list.

In some cases, I think they focused too much on a swimmer’s international career. But in this case, I think they got it right, if we’re presuming this is based on accomplishments and not a subjective sense of “quality.”

Some of the “old time swimmers” are left off; Bruce Furniss (USC), Mike Stamm (Indiana), Chet Jastremski (Indiana) to name a few. All three were part of college teams that dominated NCAAs winning multiple team titles. Jastremski also revolutionized breaststroke during his time working with Doc at Indiana.

I am SO PROUD to see my good friend Dennis Mulvihill on this list! It’s wonderful that a Kenyon man is part of this history.

Kenyon should be… what was it 31 years of titles in a row?

Surprised not to see Kalisz

this list is just a big L. should be way more 2000s 2010s swimmers. chase kalisz is the biggest snub.

and why is matt josa here

Josh Boss and Jeff Gorton. I doubt they even know they are on the list…

First name I thought of. This list suffers from recency bias.

What about seal boy??