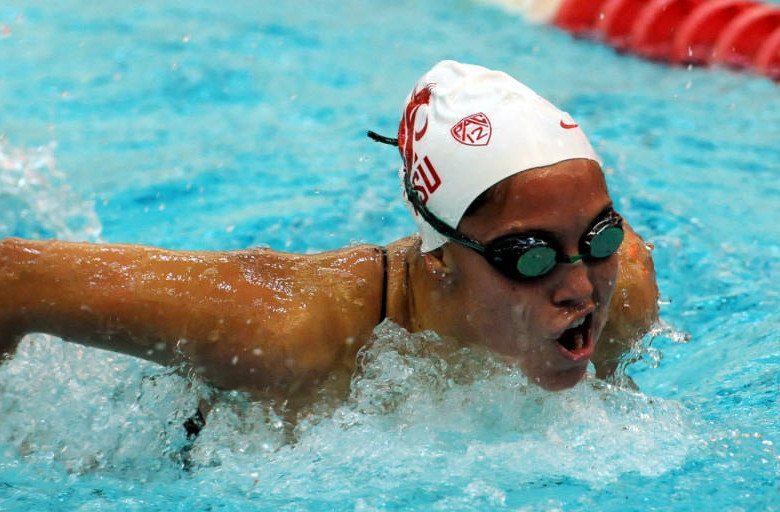 Texas Ford Aquatics hosted a 2-day, 4-session intrasquad meet over the weekend, giving it’s athletes their first competition since the start of quarantine.

Emily Cook, a Cougar freshman, broke the pool record en route to winning the 100 back with her time of 54.51. She won the event by 2 seconds over Oregon State’s Felicia Anderson (56.52). Cook split 26.79/27.72 to put up her fastest time in a dual meet this season, break the previous pool record of 54.61 and get within a second of her overall season best of 53.70, which is the Washington State school record. Her season best also ranks her 12th in the Pac-12 and 1st for freshmen in the Pac-12. Cook’s lifetime best is 53.31.

Clothilde Peseux posted season bests in both breaststroke events on her way to winning both events. Peseux’s time of 1:03.17 in the 100 breast is the fastest on the team this season. In the 200, Peseux put up a 2:17.29, good for a season best and the 2nd fastest time on the team this year.

PULLMAN, Wash. – For the sixth straight year, the Cougars recorded a victory over Oregon State, claiming a 163-74 win at Gibb Pool Friday. The Cougars placed first in every event, while four Cougars had two individual wins each.

Seniors Anna Brolin, Rachel Thompson and Talisa Wibmer combined to post three individual and two relay wins. Thompson led the way with two individual wins, clocking in at 24.16 in the 50 free and 51.55 in the 100. Brolin took first in the 100 fly with a time of 56.29. All three seniors were members of the winning 400 free relay team, after Wibmer touched the wall to close out the meet. Alongside teammate Chloe Larson, the trio swam to a dominating 3:31.07 finish in the event – nearly five seconds ahead of the second place team.

The Cougars will travel to Utah Feb. 10 for their final regular season meet. The meet is set to begin at 10 a.m.

“I saw us as a team take advantage of opportunities to work on race strategies and to prepare for individual races,” said head coach Jennifer Buffin. “Tomorrow, we will test how we move from one meet to the next.

“We did a good job earlier in the season against Stanford and Cal and it’s been a few months since we’ve had this double weekend. It will be good preparation for the Pac-12 Championships when we have to preform over a multi-day meet.”

Letrari posted her first personal best in the 200 free at 1:54.29 en route to a second-place finish. The Bolzano, Italy, native added a PR time of 5:04.34 in the 500 free to for another second-place finish to wrap up her individual events.

Freshman Riley Neal (Hillsboro, Ore.) wasn’t far behind Letrari in the 500 free as she clocked a 5:16.00 to finish third in scoring and was less than four seconds off her season best time set at the 69th Husky Invitational.

Sophomore Felicia Anderson (Portland, Ore.) led Oregon State in the 100 back with a time of 56.52 to finish in second, improving on her time from the dual against UCLA and inching closer to her NCAA B Standard set at the 69th Husky Invite. Anderson also touched the wall in 57.83 in the 100 fly for a second-place finish in scoring and shaved nearly a second off her time set in the same event at the dual against San Diego State.

The Beavers will close out the road portion of their 2018 schedule on Saturday, January 27, against Idaho at the UI Swim Center in Moscow, Idaho. The dual is scheduled to start at 11 a.m. PT.