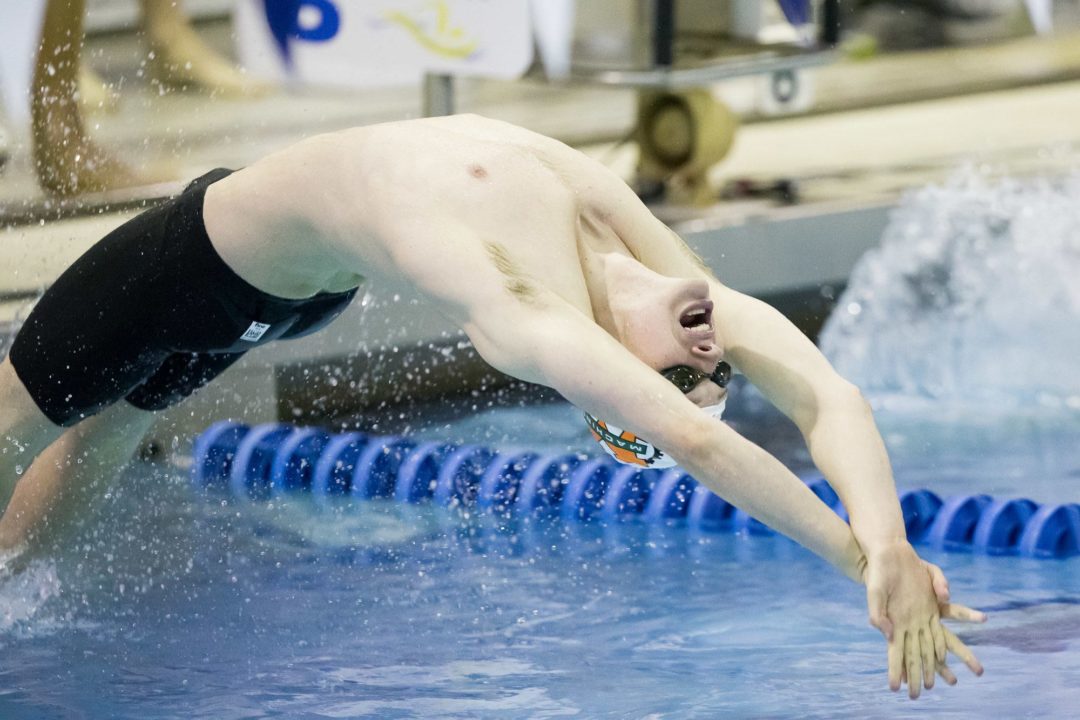 Texas' Jack Conger had a strong 200 backstroke on Saturday night to close the Big 12 Championships, though it's still hard to get a good gauge of where the Longhorns are going into NCAA's. Archive photo via Tim Binning/TheSwimPictures.com

With little competition to push them, and most of their swimmers just trying to get one last opportunity to race before their NCAA Championship taper, it’s hard to really get a good feel for where the Longhorn men and women are at this Big 12 Championship meet.

They did, however, finish the day with at least one really exciting swim in just about every race in Saturday’s finals, so they’ll have that to hang their hats on as their prepare for the big meets in the next few weeks.

The Texas women took their 2nd-straight conference championship, while for the Texas men this is 35 in a row (not all in the Big 12).

Texas’ Tasija Karosas won her first career Big 12 title with a 1:53.49. The Texas women’s freshman class was a little under-the-radar coming in, but they’ve proved to be quite a successful class, and should start to build a great future under coach Carol Capitani. That swim is Karosas’ lifetime best by eight-tenths of a second.

Texas’ Jack Conger didn’t have the kind of explosive meet that many swim fans are still longing to see from him this week, but even with the assuredly-little rest that he’s been given, he still had a lot of very good swims by most others’ expectations.

He wrapped his meet with a 1:40.56 to win the men’s 200 back and break the Big 12 Meet Record. That’s still a couple of seconds away from his personal best, and from what it’s going to take to win at NCAA’s, but it is the fastest time he’s been in a college meet so far.

Texas’ Patrick Murphy took 2nd in 1:41.35 – the next step in a very successful season without battling the ligament injury with his foot that he had to deal with last season.

West Virginia’s Bryce Bohman, winner of the 100 back on Friday, took 3rd in 1:41.52. He had two outstanding swims, and will be part of a good-sized group of Mountaineers who will swim at the NCAA Championships, including a relay, after they didn’t qualify anybody for that meet last season.

Earlier in this meet, Texas senior Ellen Lobb won her third-straight 50 free title. The 100 free, however, had been ever-elusive for her, until this year, where by .01 seconds she upended the defending champion Sam Tucker 48.83-48.84.

This event was a bit of a senior sendoff for the Texas women, as the top three finishers were all Texas seniors: after Lobb and Tucker came Alex Hooper in 49.17.

When West Virginia’s Tim Squires won the 50 free Big 12 title on Thursday, he opened a bit of a floodgate for the Mountaineers, and they’ve now rolled their way to event wins in three-straight days. That includes a second win for the junior Squires, who put in a 42.92 to win this men’s 100 free.

Squires was out hard and fought back a closing challenge from Texas sophomore Matt Ellis, who was a 43.03, followed by Charlie Moore (43.38) and John Murray (43.64). While Moore is a senior, Ellis and Murray both have two more years left in this program, and should make a good nucleus for the Texas sprint group during that time.

Texas junior Kaitlin Pawlowicz came into the wall first in the 1650 free, but when official results came out after the session, it was revealed that she had been disqualified for an undisclosed infraction. That gave the title to teammate Kelsey Leneave, winner of the 500 free earlier in the meet, in 16:19.62.

Both of those swimmers will be relying on mid-season times, barring any appearances at last-chance meets, to earn their invites to NCAA’s – Leneave in the 200 free and Pawlowicz in the 400 IM. Pawlowicz should be safe, and Leneave looks right now like she’s going to fall on the right side of the bubble, but there will be some nail-biting going on in Austin, especially through the last-chance meets.

Last year, Texas’ Sam Lewis as a freshman was a 14:54 in the 1650 freestyle, which got him into the NCAA Championships comfortably

This season, he’ll be banking on his 14:55.44 from Saturday’s final, which gave him the Big 12 title, to get him into the meet. Thus far, he sits in a very good position at 14th (including Big Ten and ACC results) as this mile looks like one of the few races where the invite time might get a little slower this year than it was last year. Given what we’ve seen of Lewis’ quality this season, overall, compared to last, he might just have saved enough to push for points this year as well.

Texas Gretchen Jaques has been solid throughout this meet, though she was short of her seed time in both the 200 IM and the 100 breast. But she finished with a bang by winning the women’s 200 breaststroke in 2:09.86, which is her lifetime best and first time under 2:10 in the event.

Texas freshman Will Licon won his second Big 12 title of his inaugural Big 12 Championship meet by putting in a 1:55.40 in the 200 breaststroke.

Swimming in the B-Final, for Texas’ non-scoring team, was junior Matt Korman, who put in a 1:56.85 for 11th place overall.

Texas senior Victoria Cassidy began her career at the University of Maryland from 2010 through 2012. After taking last season off when Maryland cut their program, she joined Texas for her 4th and final year of eligibility, and found a way to make a big impact. She won the 200 fly Big 12 Championship in 1:58.38, and collected an NCAA Consideration time to boot.

Texas Tripp Cooper, after missing the firs third-or-so of the season, has come on strong at the end and secured his second NCAA Automatic Qualifying time of the season with a 1:42.64 to win the 200 fly. His fellow junior Clay Youngquist was 2nd in 1:43.39, followed by sophomore John Martens (1:44.75) and freshman Clark Smith (1:47.24) to complete a Longhorn 1-4 finish. There haven’t been as many of those this year as we saw last year, but this one helped Texas end the meet with some confidence.

West Virignia took 2nd in 2:55.10 thanks in part to a 43.27 lead-off from Squires. That just snuck them under the NCAA “B” time standard by .04 seconds, which means thanks to their automatic qualifier earlier in the meet, the Mountaineers will get to take this relay to NCAA’s as well.

The best split of the night went to Longhorn Keith Murphy in a 42.91 lead-off. He was swimming in the B-final of the individual 100 free as a member of Texas’ non-scoring squad, but with his sprint performances at this meet so far, he might have bought himself a seat on Texas’ roster for NCAA’s.

The 200 back might be the best race of NCAAs this year with Conger, Murphy, TeDuits, Ress, Pebley, and Nolan all likely to be 1:38 or faster and I’m sure it will take a 1:37 to win.

An untapered Jack Conger still has swum very decent times. 1.33 in the 200 free, 4.15 in the 500 free, 45 something in the 100 fly and 1.40 in the 200 back. He will be ready for NCAA’s. My little concern about him is that he’s almost good on everything. But can he become great while swimming almost everything (fly, freestyle, backstroke)? I talk here more about his international future. Perhaps I’m wrong but I think his 3 best events in long course are the 200 back, the 200 free and the 100 fly. He can also swim the 100 free to grab a spot in the US 4X100 free relay olympic team with Adrian, Feigen and Dressel. On freestyle,… Read more »

It’s going to be really interesting this summer, with Nationals serving as the selection meet both for Pan Pacs and next year’s World Championships. A lot depends on Lochte and Phelps. If Lochte drops the 200 back, Conger should be right in the mix with Clary and Murphy. I think you’re right about Conger having the potential in the 200 free, I know Eddie Reese has turned out a lot of international-level 200 swimmers, but he hasn’t swam it since the summer of 2012. I’d guess that Lochte and Dwyer have the top two spots locked up pretty well. So, this summer, Conger would be swimming against McLean, Houchin, Klueh, Wynalda, Jaeger, Dressel, etc., for one of the last two… Read more »

Texas will be just fine for NCAA’s and at home too! Seems like a couple of the free sprinters may be on the bubble for individual invites though. The 42.98 by Murray and 19.53 by Moore are on the bubble. The 42.91 by Murphy should survive. Appears both the 50 and 100 invited times significantly faster this year.