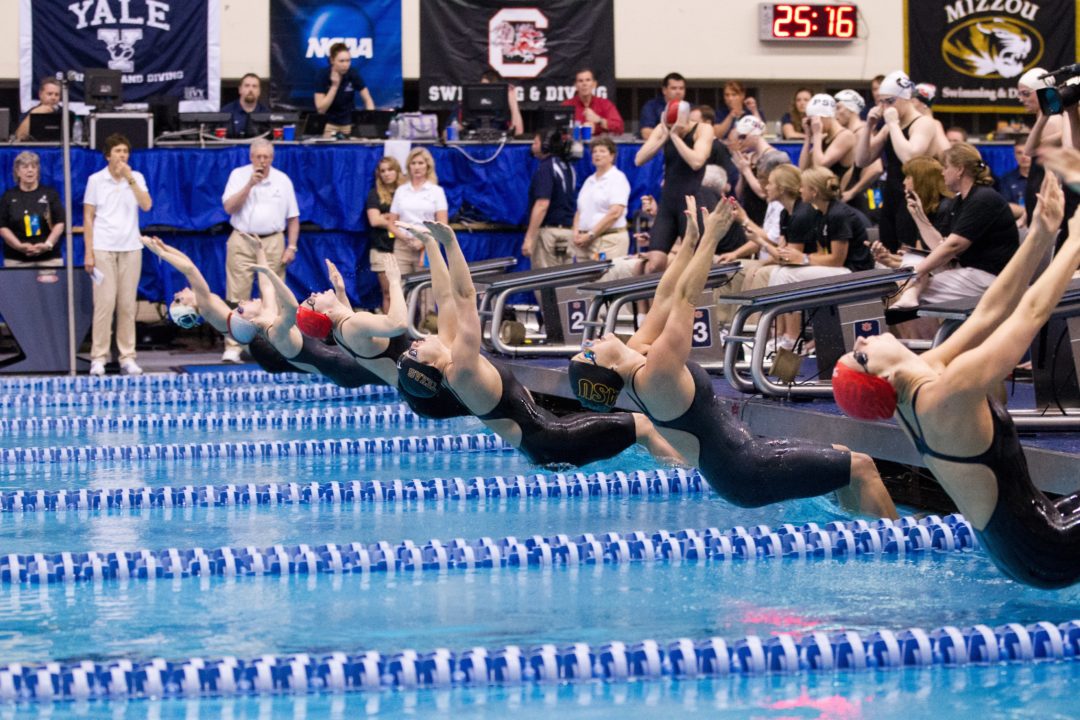 Texas Lily Moldenhauer has a huge advantage on the field in the 100 back, and will look to re-break her Big 12 Record in finals. Archive photo via Tim Binning/TheSwimPictures.com

The Texas Longhorns have looked predictably great at the 2014 Big 12 Championships so far, even under the presumption that with little competition in the team battle, they’re not fully rested for the most part (though of course, many still need to get cuts).

This morning, that continued with senior Lily Moldenhauer, who broke the Big 12 record in the 100 backstroke. That wrapped up a little of the disappointment by Texas fans in the 100 back when Jack Conger scratched the men’s version of that same race.

Beyond that story, as we mentioned a predictable one, the success of the conference’s other teams has been of note. In that vein, watch for Kansas’ Chelsie Miller in the finals of the 400 IM, where she’s the top seed over Texas’ Madisyn Cox.

Texas senior Lily Moldenhauer won the women’s 100 fly with a very impressive 51.92, breaking the previous Big 12 meet record set by Kathleen Hersey in 2010 at 52.08. Her teammate, Ellen Lob touched in second with a time of 52.53. Eva Burlingham and Julie Ogden finished third and fourth for WVU at 54.00 and 54.03. Brynne Wong from Texas earned a fifth place finish with a time of 54.25.

Jaimee Gillmore won the b-final for West Virginia with a 55.25.

Texas snagged another victory with a 53.45 from Imri Ganiel. Ford Story from TCU earned a second place finish with a 53.68, and West Virginia’s Christopher Brill rounded out the top 3 with a 54.88. Garrett Hills, a freshman from TCU earned fourth place points with a time of 56.04.

Lily Moldenhauer is having the meet that many have been expecting from her for a while!! After breaking the Big 12 record in the 100 butterfly, she won the 100 backstroke with an impressive 51.48!! After narrowly missing the record in prelims, she was able to drop time in finals to break the record. A pair of freshman finished second and third behind Moldenhauer. Kansas’s Yuleya Kuchkarova was second with a 54.21 and Texas freshman Rebecca Baxley finished third with a 54.56. TCU’s Lyndsie Gibson finished in fourth with a “B” cut time of 54.80.

After a top 3 finish in the 100 fly, Bryce Bohman picked up a win for West Virginia with a 45.89 in the 100 backstroke. Kip Darmody added a second place finish for the Longhorns. TCU’s Cooper Robinson finished third with a time of 46.94 and Patrick Murphy touched the wall in fourth at 46.98 for Texas.

So glad to see Moldenhauer swimming well…Saw her at many meets as an age-grouper and high school swimmer…..Watched her emerge from “nowhere” to make semifinals in 200 Fly at 2008 Olympic Trials, and it doesn’t seem that she reached her potential after that. very happy for her now!

Conger seems to have been swimming more 100 fly this year than 100 back–but I can’t see him placing higher at ncaa’s in the fly than in the back. And I think he would prefer the challenge of facing off against Murphy and Nolan. What is Texas’ strategy here?

From what I can tell…

Conger only swam the 100 fly about .1 better last night than he did at the Texas Invitational, where he was 46.6 in the 100 back. Still have to see what Murphy, Nolan, and Pebley do at Pac 12s.

It looks like Smith is the favorite to win the 100 fly, while the 100 back may be a crapshoot. It seems like, given… Read more »

Maybe–but Texas may want to rethink that strategy–the 100 fly is shaping up to be every bit as tough as the 100 back at NCAA’s based on the conference championship times that are being posted . . .

Also Tripp Cooper is right with Conger in terms of 100 fly speed (less than.2 between them at Big 12’s), but I would guess Conger might be .5 to .7 faster than Kip Darmody in the 100 back. If they shift things around I bet Texas could squeeze another .5 to 1.0 from their medley relay time . . .

That was big for them – and as we’ve seen in the Big Ten, one leg isn’t always enough to get you there alone (Minnesota didn’t get there even with Toomey leading off in 19.14). A cuts in relays are becoming a real challenge – and a big accomplishment.

That’s true it takes all 4.

Should have mentioned the total domination of diving by the longhorns. Women finish 1-2-3-4-6 in the 3M including an astounding 414 pts. from Maren Taylor. Texas is good enough they could put 3 in the finals of every board.

Texas scratched all but one male diver from the platform Saturday to save on wear and tear.

Tripp Cooper’s fly is definitely on. I hope that Conger time trials a 100 back this weekend. He might move to back and Charlie Moore could do breast on the 200 medley. Lots of options for Texas.