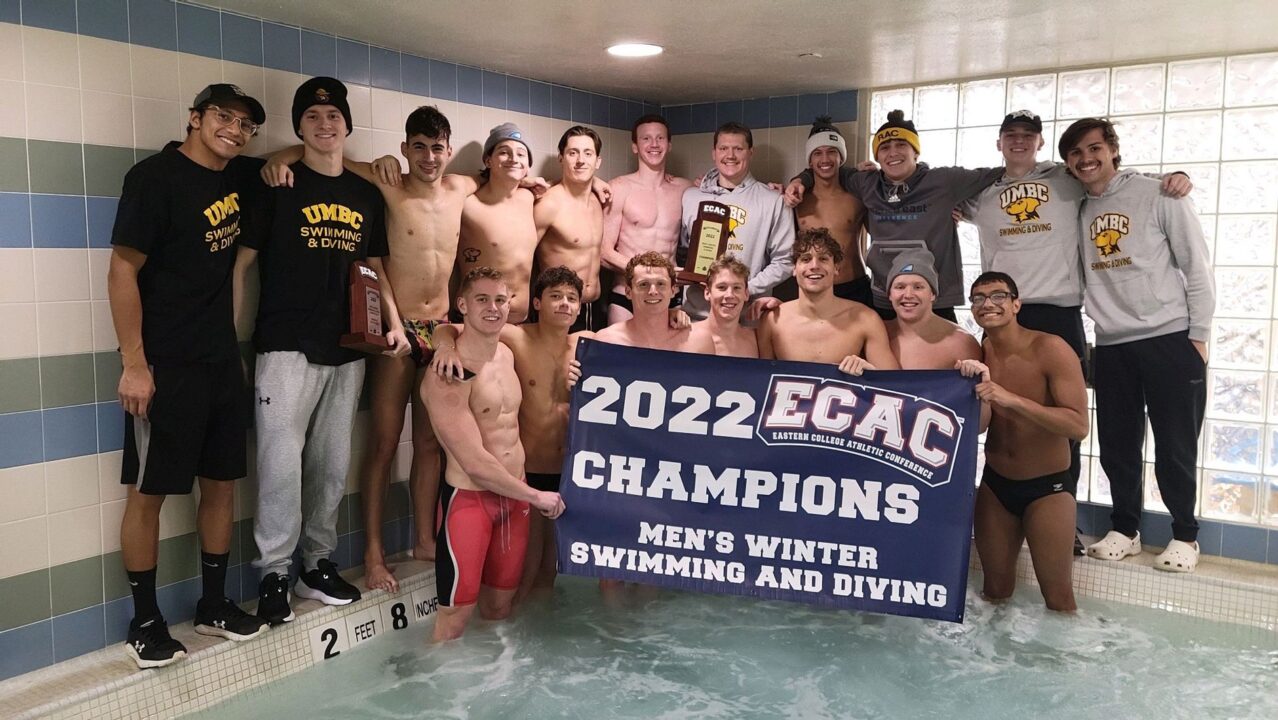 EAST MEADOW, N.Y. – The women’s swimming and diving team finished in first place at the ECAC Winter Championships on Sunday evening, and was named 2022 ECAC Winter Champions. The Lions scored a combined 2019 points throughout the three-day event, besting second place UMBC who scored 1045. Besides excelling as a team, Columbia also had a number of record-setting individual performances.DAY ONEEmily MacDonald shattered a school record in the 50-free, taking first place in the event with a time of 22.66. This would also break the ECAC record in the 50-free, as did Isabelle Arevalo who finished in second place, right behind her teammate with a time of 22.91. In all, the team broke eight ECAC records on day one. Aziza Ganihanova (4:47.73) won the 500-free, and set a new record. Karen Liu would claim first place in the 200-IM, with a record setting mark of 2:00.93. The Lions’ relay teams would set the other three records, as they went on to win the 200-free relay (1:31.67) and the 400-medley relay (3:43.04). DAY TWOThe Lions began day two with a win in the 200-medley relay with a time of 1:42.44. In the 400-IM, Allison Martin won her first event of the competition, clocking in at 4:21.44, just ahead of teammate Julia Unas who took second place. MacDonald continued her dominance in East Meadow, winning another event. This time, it was the 100-fly (54.99). Olivia Jubin (1:48.39) took first place in the 200-free, claiming her first victory of the weekend. Ashley Hu got in on the party during the 100-breast, besting her teammate Allegra Walker to place first with a time of 1:02.85. The Lions wrapped up day two with their fourth relay win of the weekend, taking first in the 800-free relay with an impressive time of 7:28.25. DAY THREEThe highlight of day three came when Ganihanova set a new program record in the 200-back, taking first place with an impressive time of 1:57.35. This also broke the ECAC record in the 200-back, which was set by none other than Ganihanova herself, previously. Meanwhile, Jubin dominated the mile swim, coming in first while shattering the ECAC record with a time of 16:35.78. This was also the second-highest mark in Columbia history. MacDonald went from winning the 50-free on Friday, to dominating the 100-free on Sunday, taking first with a time of 49.56.Liu would go on to win her second and third events of the weekend, finishing on top in the 200-breast (2:15.48), and 200-fly (1:58.61). The lions closed out the day finishing first and second place in the 400-free relay. DIVINGMeanwhile, the women’s divers have been competing at the Big Al Invitational hosted by Princeton University in New Jersey this weekend. Macy Pine placed sixth in the 3m championship on day one with a score of 254.15. On day two, Alice Diakova took eighth in the 1m boards, scoring 229.90. On the final day at the platform diving competition, Pine finished fourth with a score of 241.00 which would surpass the NCAA zone diving qualifying score. “The Columbia women made a dominant statement again this year at the ECAC Winter Invite,” Head Coach Diana Caskey said. “We had great team energy that built through the meet and really pulled everyone along. We are grateful for both the team and individual experience.”
ON DECK – The Lions will have a few weeks off before returning home to host Brown at Percy Uris Natatorium on Friday, January 13. The meet is scheduled to begin at noon.

UMBC’s Oliver Gassmann earned Swimmer of the Meet honors, capturing a pair of events on Sunday after taking the 100 butterfly in meet record time on Saturday.

“(It was) a tremendous weekend all around for the program,” said Head Coach Matt Donovan. “We graduated a very talented class last year and now each athlete on the team is being asked to step outside of their comfort zone and help in a new way. What’s most inspiring is that we were able to do it on a very high level. We are in a perfect position to move into the second half of the season.”

Sophomore JJ Chapman placed third in the 200 backstroke and Dani Nicusan took the second spot in the 200 yard breaststroke. Senior Zach Deal also had an outstanding effort in that event, finishing in fourth position.

The Retrievers, who won every relay during the meet, wrapped up the weekend by edging LIU in the 400 yard freestyle relay with a time of 3:00.94. Nicusan, Christian Coleman, Weigelt and Bode Neale took the lead on Weigelt’s final 50 and won by 0.14 seconds.

UMBC does not return to competition until 2023 as the Retrievers face Howard in Washington, D.C. on Saturday, Jan. 14.