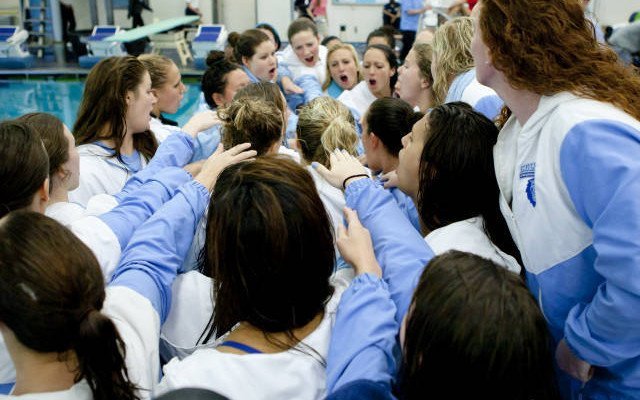 A native of Melbourne, Australia, Goh redshirted her senior season to train for the 2008 Australian Olympic Trials, where she finished third in the 50m back and seventh in the 100m back. Goh represented Australia at the 2008 FINA World Short Course Championships in Manchester, England; she won a silver medal with the Australian 400m medley relay team, finished fourth in the 100m back, and 17th in the 50.

I can’t appreciate that such an internationally qualified swimmer ( also a dual academic success) is an unpaid assistant . Or is this a mistake and it is Colombia university – 3rd world corrupt & broke?

For each team (or gender, if you have a combined staff), the NCAA allows 3 full time paid coaches. Thats the HC, usually one Assistant, and a Dive Coach. I dont think it has anything to do with Rachel being unqualified – just more Columbia’s fortune of a great person at the right time who can do it for free.

I’m sure if Rachel was in pursuit of a full time coaching position, she’d find one.

Read again – I did not say she wAs unqualified . Far from it , nor are her aspirations necessarily To be a ft swim coach . (Last I heard she was looking at a Doctorate in psychology .) So the NCAA / Columbia hides behind amateurism & faux equality -? Yeah I’d like to see that reflected in the school overall including fees . I have not forgotten liberty ( it is their choice ) ‘Oh you can only have 1 prof per 700 students because we can’t be more exclusive than say Boise State. ‘Yeah sure mate. This along with the intern rite of passage is what the mass labour strikes & revolutions of the 19th / early20th… Read more »

Could it be that she is doing some graduate work there and happens to be at the right place at the right time? I know in the past, volunteer assistants helped for a year or two and left after their masters or professional programs where done. Maybe this is the case

Yes but that is no xcuse to not pay . The article says ‘hired’ and add this to the previous comments on ‘volunteer’ hirings even here on SwSw. One was advertised with a long list of duties beyond reasonableness .

It is not only about Rachel.

It may be that she has a student job already. Students often are limited to a certain number of hours per week of work on campus during the academic year. In some cases the maximum allowed is 25 hours/week. If she has another campus job, it may not be possible to pay her. Just saying…I work at a university and that is the case. You can, however, worked unlimited hours off campus.

I missed the part in the story that said Rachel was being forced to work as an unpaid assistant. Obviously it’s something she wants to do. What program in their right mind wouldn’t take her on deck?

The reason for her “volunteer” status is simply based on NCAA regulations. It is not a conspiracy by “the Man”. Right-to-work opportunity. . . she chooses to do it, knowing she is not getting paid.