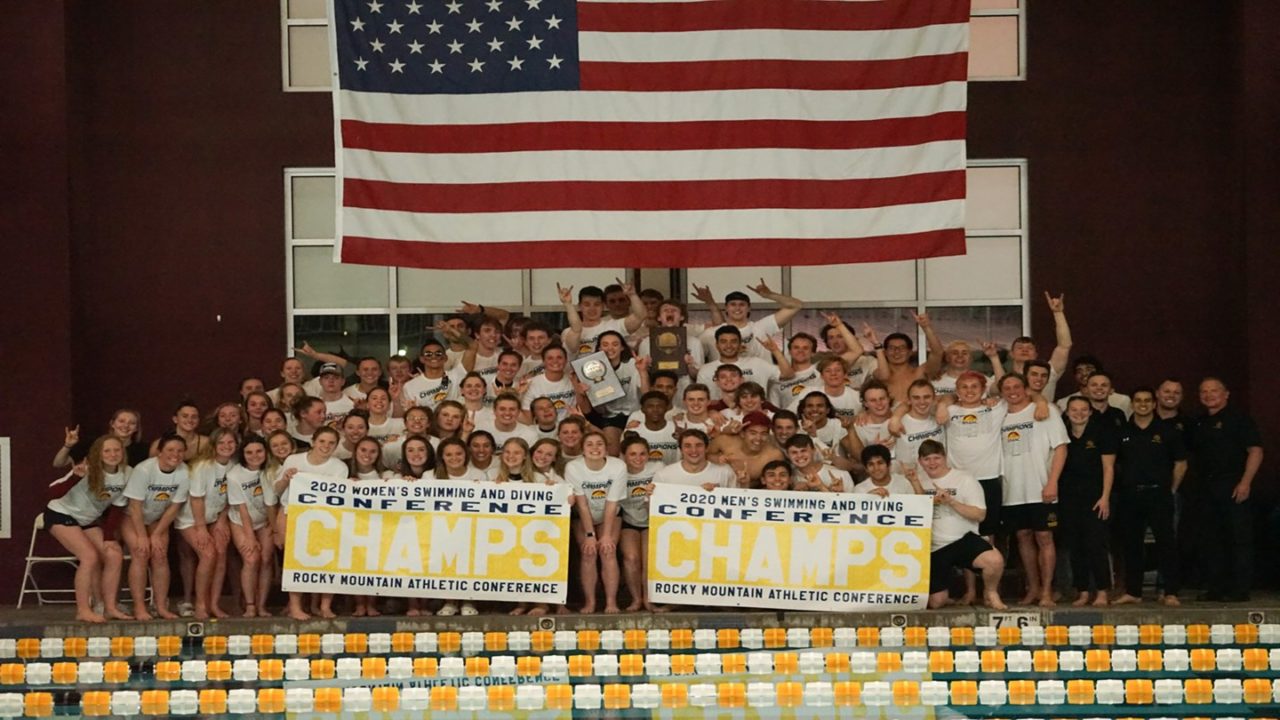 The Maverick women broke the team score record with 1,171.5 points. The championship marks the fourth for the men and the second for the women. Current photo via Rocky Mountain Athletic Conference

GRAND JUNCTION, Colo. – The Rocky Mountain Athletic Conference (RMAC) Swimming & Diving programs finished up action at the 2020 Championship hosted at the El Pomar Natatorium on the campus of Colorado Mesa.

The Mavericks of Colorado Mesa earned both the men’s and women’s team title for the second consecutive year. The women’s program smashed the old team score record that was set in 2014 by California Baptist (1,092) by compiling a final score of 1,171.5. The title marks the fourth team championship for the men and the second for the women.

1,650 Freestyle
In the longest race of the Championships, it was Mia Wood of Colorado School of Mines that bested the field for a second straight year with a time of 16:59.65. Her time was also a NCAA “A” standard mark and a new school record. For the second time this championship her teammate and twin, Mia Wood finished behind her in second (17:29.20).

Torsten Rau of Colorado Mesa took it from the start and never look back to claim the RMAC title with a time of 16:03.02.

100 Freestyle
Freshman, Bret Congdon of Colorado Mesa bested the field as he touched the pad in a time of 51.33.

It was a freshman trio that went 1-2-3 in the event as the first-time championship experience did not scare them away. Teammates Estevao Hornos and Daniel Santos of Oklahoma Baptist went 1-2 finishing in 44.96 and 45.07, respectively. Felipe from Colorado Mesa finished in third with a time of 45.69.

200 Backstroke
Lauren White a freshman from Colorado Mesa touched the wall pad and recorded a time of 2:00.64

200 Breaststroke
Dixie State’s Hannah Hansen took the victory as she clocked a time of 2:18.54 which is nearly two seconds ahead of her prelim time.

Taking nearly three seconds off his prelim time was Zac Hawes of Oklahoma Christian as he finished first with a time of 2:01.45.

Men’s 3-Meter Dive
Colorado Mesa made it a clean sweep of both the men and women’s diving competitions as Ammar Hassan totaled a score of 597 points to take the victory. Hassan is the two-time reigning NCAA 1-meter and 3-meter Champion.

400 Freestyle Relay
The Colorado Mesa squad won the final event of the night for the women as the team of Lauren White, Bret Congdon, Noel Scott and Maddie Pressler finished in a time of 3:26.79.

The team from Colorado School of Mines finished in second with a new Oredigger record time of 3:28.58 set by Madeleine Oakley, Olivia Lomax, April Wood and Mia Wood.

The Thunderwolves of CSU-Pueblo set a new school record as the team of Phoebe Pontious, Julia Whitfield, McKenna Hauber and Selina Wang combined for a time of 3:32.79.

The Bison men capped off the meet for the second consecutive year by winning the event as the squad of Estevao Hornos, Hank Contich, Colton Wyatt and Daniel Santos combined for a time of 3:00.36.

What is the criteria in order to choose the Freshman of the year? 😉

Congratulations to Felipe D’Orsi well deserved.
But how this honor is made of ? What does it take into consideration to elect this student-athlete? Thank you.