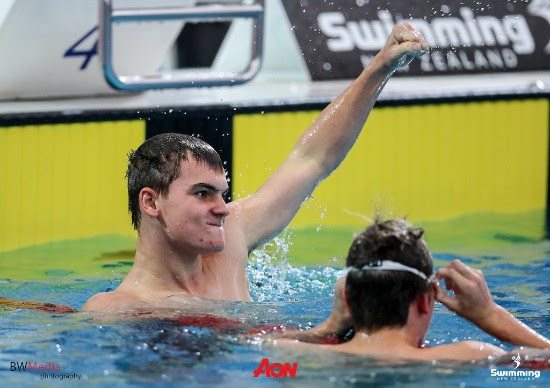 With the exception of border controls, swimming in New Zealand can return with full force this week, including training and meets.

As New Zealand Nears Full Return, Swimmers Get Back to Pool Training

As of today, according to data from Johns Hopkins University, New Zealand has logged 1,499 confirmed cases and just 21 deaths.

Collins, 13, from SwimZone in the Hutt Valley, stopped the clock at 1:00.63s to shave off 0.26s from the previous record held by Mitchell Donaldson.

“I was just off the record this morning, so my coach wanted me to go out a bit faster, on the first lap I changed my stroke pattern and it worked,” Pierce said in his post-race interview.

The win is Collins’ fourth title of the championships.

Earlier in the week, Collins broke his own age-group record in the boy’s 200m butterfly in a new personal best time of 2:13.92s.

Erika Fairweather, 14, from Neptune swim club in Dunedin added two more national titles to the three she’d won earlier in the competition.
In the girls 14-years 400m individual medley final, Fairweather built a commanding lead after the first 100m and stormed home to win by over 15 seconds in 5:01.52s, also a new personal best time.

McCarthy was the top seed going into the final of the girls 15-years 400m individual medley final.

In the 200m backstroke final McCarthy won by just over one second (2:20.29s PB) from a fast finishing Paris Cutler (Kiwi West) who caught Sophie Irving (Capital) in the final 20m.

The most anticipated race of the evening was the boys 16-18 years 200m backstroke final.

In the lead up to the event, the race had garnered some light-hearted social media interest between swimmers, which created an electric atmosphere amongst the crowd.

Clareburt returned to later in the session to win the 100m butterfly final in another personal best time of 54.45s.

VISION: The meet is live-streamed on the SNZ Facebook Page.

are you comparing New Zealand to the US? lol

You did notice that it is a 13 y old swimming a 100 meter fly right? According the USA Swimming times search, there have only been 2 13 year old swimmers faster this year. For a much smaller country, that’s an impressive time (or really impressive no matter what)