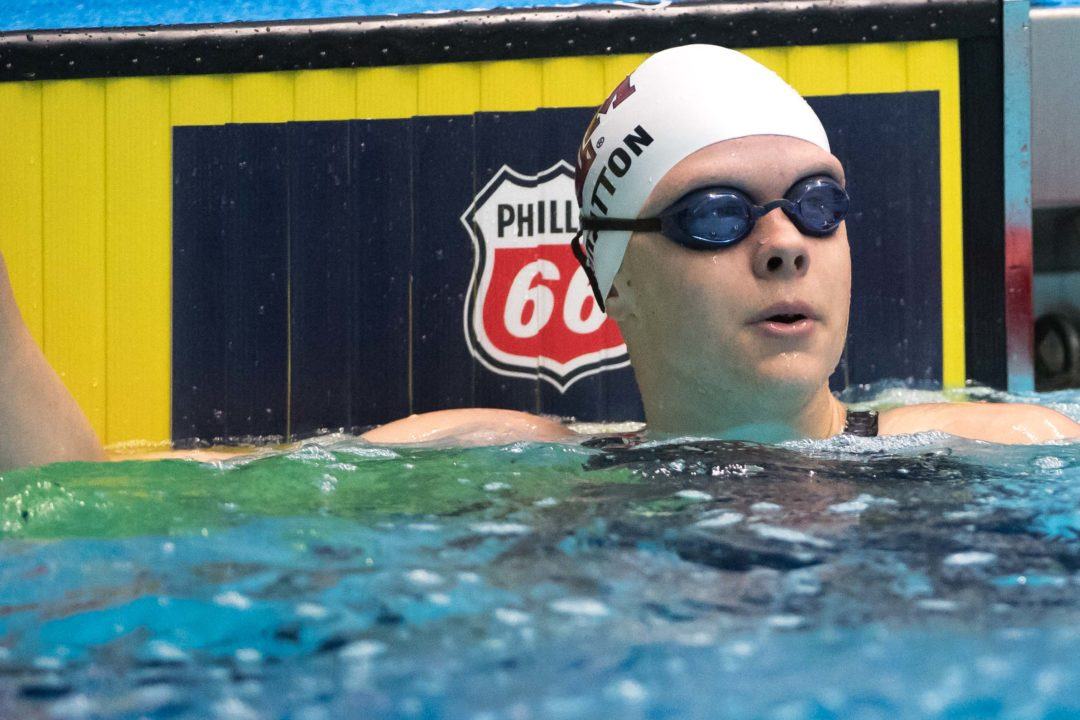 College teams dominated the team standings at the 2017 U.S. Open Swimming Championships, winning both the men’s and women’s titles.

In the men’s standings, 9 of the top 11 teams were collegiate programs, with the other two being foreign programs (France as a nation took 4th, and the Western Australia Institute of Sport as a team took 8th).

The Cal men took the title fairly comfortably – 61.5 points ahead of 2nd place Alabama. The Texas A&M men, who are a program that have risen dramatically in the last 24 months, placed 3rd with 152 points. 3 of the top 6 programs (and 4 of the top 6 college programs) compete in the SEC.

There’s some gray area and some programs that overlap between their college and youth club programs, but by large strokes, the top-finishing men’s team not affiliated with a college (or a national program) is Quest Swimming in Midlothian, Virginia. Among the stars for them were 18-year old Florida-bound Clark Beach, who finished 4th in the 200 back (1:59.28) and 8th in the 100 back (55.48).

The team did get a boost from one college swimmer – University of Texas undergrad Jeff Newkirk represented his hometown club at the meet, and placed 6th in the 100 free 4th in the 400 free, and won the 200 free. While there were plenty of high school aged swimmers scoring at the meet, we went pretty far down the rankings without hitting a club that had no American swimmers who are college or post-graduate swimmers boosting their scores. Beach scored 26 points and Newkirk 48 points, accounting for all 74 of Quest’s points.

On the women’s side of the pool, Texas A&M, who was 3rd at last year’s NCAA Championships, won the title with 332 points. Kentucky was far behind in 2nd in 177, and Missouri was 3rd with 172 points. That put the SEC in the top 3 spots.

The Aggies won all three relays, which helped add huge points to their scoring. U.S. National Teamer Lisa Bratton made 3 A-finals, making her one of six individual scorers for the Aggies.

We didn’t have to go as far on the women’s side to find a non-collegiate program. The host Long Island Aquatic Club placed 5th with 127 points – with a few collegiate athletes on their roster (who mostly contributed on relays). The team racked up big points on relays – placing 4th in the 400 free relay, 7th in the 800 free relay, and 10th in the 400 medley relay. Kristen Romano also picked up some points while placing 12th in the women’s 200 IM.

The Marlins of Raleigh placed 7th in the women’s meet with 98 points – and miraculously did so with just 4 swimmers, all of high school age. That includes U.S. National Junior Team member Madison Homovich, who led the team with 19 points. All 4 swimmers contributed though – Abby Arens scored 10 points, Grace Countie scored 11, and Ashley McCauley scored 16 individually, plus relay swims.

“It’s always fun to win a team title and this was a really nice win for us,” said Aggie women’s head coach Steve Bultman of the women’s win. “It’s an accomplishment to win all the relays and we were really close to a couple of individual wins too. I’m really happy to win the combined team championship and see the men’s team finish third. The U.S. Open is a national level meet and I’m proud of the swimmers and what they accomplished.”

Added men’s head coach Jay Holmes, “It was special to come up here and swim this well. We had a fun time racing and competing against a really strong field. It seemed like we had some great swims every day. There was constantly excitement in the air on deck and I couldn’t be prouder of our swimmers.”

I imagine Florida would have finished pretty high or at the top of this list (in the 400 IM alone, they had 3 guys and 3 girls in the A final), but by and large, they have their swimmers represent the banner of their hometown club for national meets. The meet High Point winner on the men’s side was Andrew Brady, who will be a senior at UF this year.

This is why I would personally be in favor of forcing swimmers to represent the club they’re currently training with. But, I know there’s a lot of politics built into these club representations, so it’s going to take a turnover in generation before that conversation could even be had in any productive way.

Join the discussion
Kids representing their home clubs gives back to their local team and does a lot for the team that produced them. Colleges that do this help foster recognition at home….seems like a good idea.