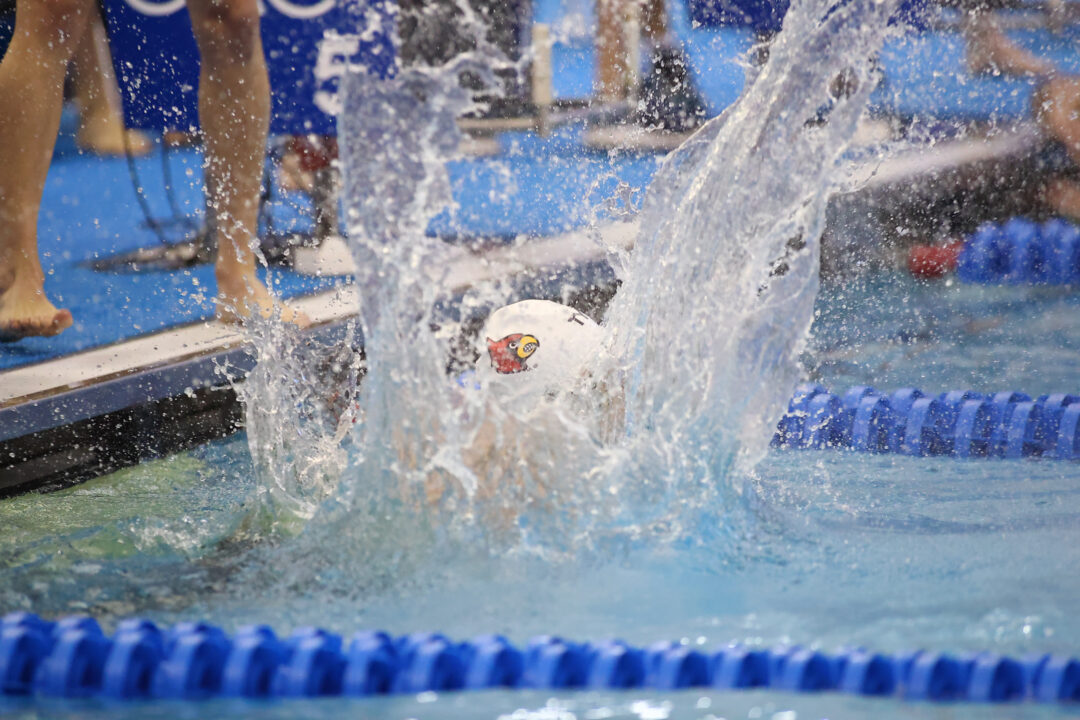 The Cardinals had their lowest NCAA finish since 2015 and lose some big names, but a new core could coalesce this year and return Louisville to the top ten. Current photo via Jaylynn Nash, the ACC

Louisville took a small step back last season after capturing the overall 2021 ACC championship and the program’s first-ever NCAA relay title the following month. NC State reclaimed the ACC title with a vengeance, but the Cardinals seemed to be in pretty good shape heading into NCAAs, with nine individual qualifiers.

However, the Cardinals struggled somewhat unexpectedly in Atlanta. While Nick Albiero performed admirably, racking up 42 points across three individual events, the rest of the Cardinals scoring crew was MIA or underwhelming. The Cardinals ended up 12th in the team standings, their lowest finish since placing 15th in 2015.

One of the biggest issue was the loss of Abdelrhaman Elarby (aka Haridi Sameh). The Egyptian Olympian has the times to score at NCAAs and was slated to swim on four relays, but he missed NCAAs, later revealing that his absence was due to mental health issues. Missing Elarby affected the Louisville relays, of course, but that wasn’t the only issue. Evgenii Somov mustered 1 point after scoring 15 in 2019 and 2021. Neither Daniel Sos nor Mitchell Whyte, both of whom had previously earned individual points, managed to score.

Still, when a “down year” for a program results in a 12th-place finish, that generally means the team had plenty going well too. Freshman Murilo Sartori made the A-final in the 200 free. Relays have long been a Louisville strength, and they scored in four of the five relays, with top 8 finishes in three of the events.

Assuming he returns (and it looks like he should), Cardinals’ sprint crew is led by Egyptian national Abdelrhaman Elarby. He owns lifetime bests of 18.83/41.94. That 50 free time would’ve put him in the A-final last season, while the 100 free time would’ve just missed scoring.

While Elarby is the only Cardinal who seems likely to score in the shortest two free events, they’ve got a solid relay crew behind him. In fact, the Cardinals set a program record in the 200 free relay at ACCs (the only relay in which they didn’t score at NCAAs) and Albiero, who’s now gone, was actually their slowest leg.

Dalton Lowe split 18.79 on the ACC relay, then went 19.32 individually at NCAAs.  Michael Eastman returns for a fifth year has a history of sub-19 free splits. Vladimir Dubinin and Caleb Duncan hopped on the 200 free relay at NCAAs, and either one could throw down a good leg come championship season.

Louisville picked up a pair of Olympians in Murilo Sartori and Denis Loktev last season. Sartori made the A-final of the 200 free after going 1:31.99 in prelims, while Loktev topped out at 1:33.74 (1:33.16 relay split) despite both going 1:46 in LCM. Sartori has a bit of sprint speed, and he split sub-42 anchoring the 400 medley relay in Elarby’s absence.

There’s a lot of potential here, but the Cardinals didn’t pick up any points in the distance events last season. Not only did they not score any distance points, but they didn’t even have a swimmer entered in the 1650. Gustavo Saldo was the only Cardinal to swim the 500 free, finishing 42nd.

However, rising senior Ilia Sibirtsev has NCAA experience, having competed in at the meet in 2021. He owns lifetime bests of 4:18.60/14:51.33, so he’s not exactly on the cusp of NCAA scoring, but he has the background  (he’s a former European Juniors medalist) to suggest that making the improvement still isn’t out of the question.

The Cardinals also bring a great developmental piece in freshman Jacob Pishko. He excels at the longer distances — he’s a national junior champion in the 7.5k open water– but with lifetime bests of 4:25.35/9:19.30/15:36.85, and the Cardinals history of success in the distance events, it wouldn’t be surprising to Pishko develop in the pool quickly.

The Cardinals are essentially rebuilding from scratch here after losing Albiero and Mitchell Whyte.

Dalton Lowe is the fastest returner in the 100 back, having clocked a 46.17 at ACCs. However, there’s a gaping maw in the 200 back, where they don’t even return anyone who as much as swam the 200 back at conference.

Barring any unexpected international additions, it looks like freshman Charlie Crush will be the face of Louisville backstroking this year. He owns lifetime bests of 21.64/47.10/1:47.50. He’s going to need some quick further improvements to keep the medley relays as strong as they’ve been, but we’ve seen Louisville freshman flourish before — case in point being the aforementioned Whyte back in 2019. Fellow freshman Jackson Millard is stronger in the 200 than Crush, owning lifetime bests of 49.15/1:44.48, with that latter being within ACC scoring range.

Evgenii Somov is gone after five great years, but there’s a ready-made replacement in Denis Petrashov. The native of Kyrgystan quickly adapted to the yards format in his first year in the US, hitting 51.92/1:51.89. He missed scoring at NCAAs after losing a swim off for 16th in the 100 and not matching his ACC 200 breast time. But those times provide promise that he should score this year in both events.

With Albiero gone, Dalton Lowe is now the biggest fly guy in Louisville. Last season he actually ended up swimming fly on most of the medley relays during championship season, and delivered, including a blistering 19.50 split at ACCs. He finished 29th in the 100 fly at NCAAs, but his lifetime best of 45.26 would’ve moved him up to 20th. His 44.38 NCAA medley relay split included a 0.00 RT, but he still looks like a threat to get under 45 next season and score.

Elarby went 45.60 at ACCs to make the A-final, and while that won’t score at NCAAs, it does provide depth and some relay potential relay options if necessary.

Tommy Bried sat out most of his freshman season, but owns lifetime bests of 48.76/1:46.65, and had some nice long course swim in the spring. If he’s back, he should be line for some solid yards improvements this season.

This is yet another group that’s pretty depleted after graduations. In fact, the Cardinals only return a IM single swim from ACCs, and that’s Elijah Shoyat‘s 400 IM, where he place 32nd in prelims.

Pishko will probably swim this event at conference, but he’ll need to see his lifetime best of 4:00.57 improve dramatically to score there, much less at NCAAs. Fellow freshman Jackson Millard should make an immediate ACC impact with lifetime bests of 1:48.08/3:48.41.

The Cardinals diving group didn’t qualify anyone for NCAAs last year, and Kovac Gur, who qualified the previous year, has graduated. Louisville’s best returner is sophomore Che Stephens, who made two A-finals at ACCs this past spring.

Assuming Elarby is back and in form, the Cardinals’ sprint freestyle relays appear to be in good shape. Elarby, Eastman, Lowe, and Brooks should form the core of the 200 and 400 free relays, with Sartori probably replacing one of the latter three men on the 400 free relay after splitting 41.5 anchor the medley relays at NCAAs.

The 800 free relay returns three of the four men who combined for an 8th-place finish at NCAAs: Sartori, Loktev, and Eastman. The question is who will replace Albiero and his 1:31.20 leg, and there is no immediately apparent answer. The next-fastest returner on the roster is Saldo, who has a best time of 1:35.03.

Likewise, the medley relays have easy answers for three of the four legs. Petrashov should readily replace Somov on breast, Lowe looks locked in on fly, and Elarby should resume anchor duties. All that assumes that Crush or someone else will get down to the times Louisville needs to see on back. If not, there is an outside chance that they could shift Lowe to back and Elarby to fly, and have some combination of Brooks, Eastman, and/or Sartori take over free. Until they solve the backstroke issue, this doesn’t look like a team that’s likely to compete for NCAA championships again, but they should have enough on the other three legs to at least be in the mix for a top eight finish on both medleys.

Anytime you have to replace a core like Albiero, Somov, Whyte, and Sos, it’s going to be tough, and there’s an additional layer of uncertainty with a revamped coaching staff. But, we’ve seen Arthur Albiero and Co. excel at doing more with less over the years.

The relays are in solid shape, and usually scoring in five relays is enough to put you in the hunt for a top ten finish at NCAAs. The freshman class isn’t flashy, but has the potential to explode in a good way. Add in a returned Elarby, more experience from Petrsahov, Sartori, and Loktev, and there’s plenty of reason for optimism among the Cardinals faithful.

Repeating the historic 2021 performances may be a tall order, but it shouldn’t take much to break right to improve on their 2022 12th-place finish and move back into top 10 come March.

Pardon my ignorance, but why does Sameh / Elraby have 2 names? Is it an Egyptian translation thing, or did he change his name for personal reasons?

Arthur will figure this out and surprise some people!