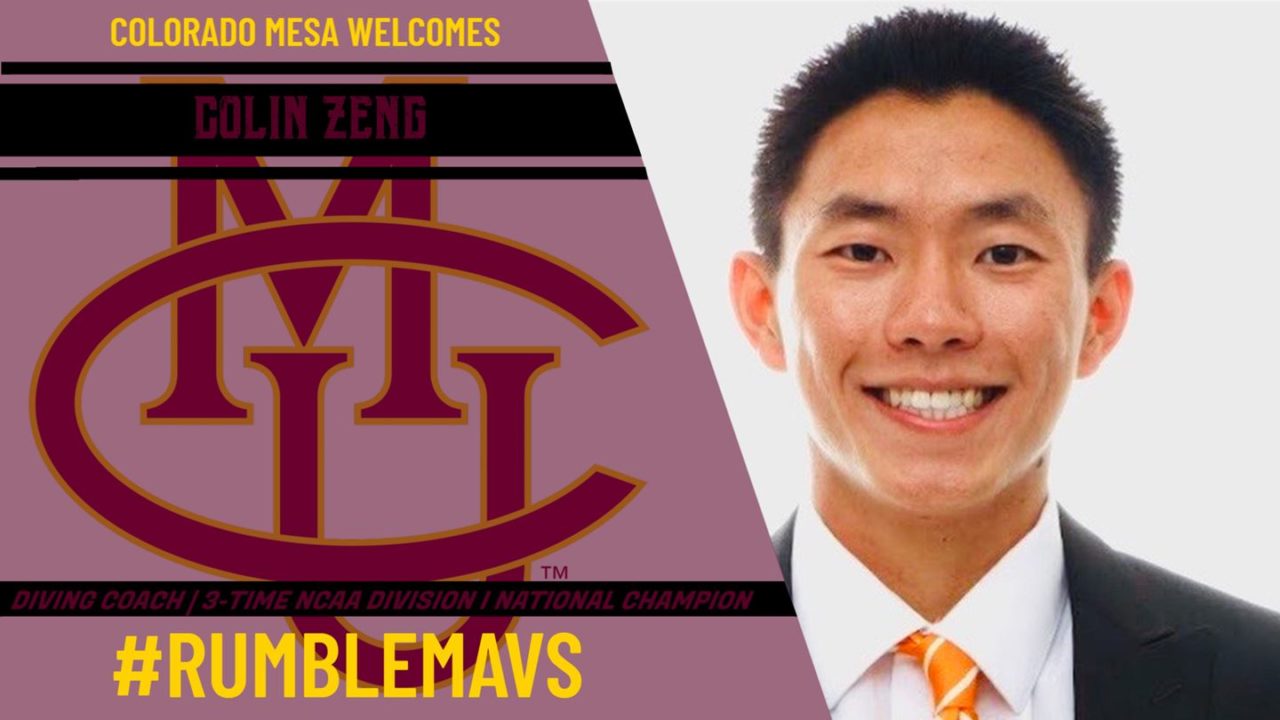 Zeng won three NCAA Division I National Championships and earned ten all-America honors in his time as a diver with both Ohio State and Tennessee. Current photo via Colorado Mesa Athletics

Zeng joins the Maverick program after spending the past year-plus as the graduate assistant diving coach at Division I Iowa, where he helped coach a pair of Hawkeye divers to NCAA Division I All-America honors in 2020.

Zeng, a native of Fujian, China, who attended high school in California, was a standout diver during his days as a student-athlete, winning three NCAA Division I National Championships and ten all-America honors in his time at both The Ohio State University and the University of Tennessee.

“We are thrilled to welcome Colin Zeng as the newest member of the Maverick Swim/Dive family. His experience as a diver is unparalleled. He has trained and competed with the best in the world and is the consummate student of the sport,” Wender said.

At Tennessee, where he spent his final two collegiate seasons (2017-18 & 2018-19), Zeng won the 2018 NCAA title in the platform event before winning the 1-meter springboard event in 2019. He was named as the College Swimming & Diving Coaches Association of America (CSCAA) Diver of the Year in both seasons.

He also set the Volunteers’ school records on both the platform and 3-meter springboard and was named as the SEC Diver of the Year in both 2018 and 2019, amongst other accomplishments.

Prior to his time in Knoxville, Zeng dove for Ohio State from 2014-17 and won the first of his national titles in 2016 as a redshirt freshman off the platform. He was also the Big Ten Champion in two events and was named as the Big Ten Conference Diver of the Year that season.

Zeng also served as a diving coach for both the Ohio State Diving Club and the Tennessee Aquatic Diving Clubs during his time as a student-athlete before moving on to his role at Iowa, where he and head diving coach Todd Waikel coached Hawkeye freshman Mohamed Neuman and sophomore Samantha Tamborski to all-America honors on the 3-meter springboard in 2020. Neuman, who is an Egyptian National Teammate of Maverick senior Ammar Hassan, was also named as an all-American on the platform and both he and Tamborski finished seventh at the Big Ten Championships before successfully navigating the NCAA Zone D Diving Championships to qualify for the national championships, which would later be canceled due to the COVID-19 pandemic.

Zeng earned SEC and Big Ten Academic Honor Roll honors a combined four times and was a member of the Student Athletic Advisory Committee (SAAC) at Tennessee, where he completed a bachelor’s degree in psychology in 2018, before beginning on his master’s degree in kinesiology with specializations in sport psychology and motor behavior, which he completed in December, 2019. He is now working on a second master’s degree in sport and recreation management through Iowa.

As a young coach Colin has already set himself apart as an expert technician and proponent of utilizing sports psychology skills to enhance performance. However, it is his life story and personal resilience that will have the biggest impact on our program,” Wender said.

“We couldn’t be more excited about welcoming him to Grand Junction and to the Maverick Nation.”

Way to go Colin. Great hire! Colin was an inspiration to the Tennessee team. The Vol nation wishes him great success.