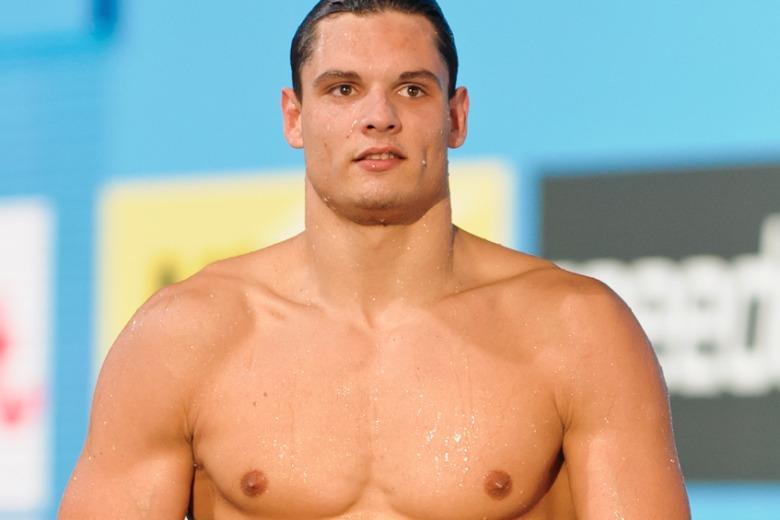 Florent Manaudou and the rest of the French sprinters lived up to their hype in a very exciting 100 free final at French National Long Course Championships in Chartres. Archive photo via Victor Puig

Women’s 50 free: In a final that wasn’t really any faster than the morning prelims, Anna Santamans of Nice was crowned French national champion in 25.01. She was faster than when she won a year ago but .20 off her seed time. Second place went to her teammate from Nice, Camille Muffat. Showing her versatility by competing in sprint fly and free in this meet, the mid-distance specialist went a personal best 25.41 in prelims. She finished with 25.52 in finals, just fast enough to qualify for Euros (25.54 cutoff). Anouchka Martin of Saint-Dizier was third in 25.65, dropping .32 from her seed time but just missing the Berlin qualifying time.

Women’s 1500 free: The top four seeds all came to Chartres with sub-Euro times (qualifying standard = 16:42.76) so it looked like a women’s event that would put all four possible on the roster (there haven’t been all that many so far). As it turns out, they just squeezed in.

Although the podium didn’t include any big surprises, it wasn’t a particularly fast final. Dijon’s Morgane Rothon won in 16:32.84, her best time by 1.2 seconds. Coralie Codevelle of Sarcelles was second in 16:39.36, just off her seed time. Aurélie Muller of Sarreguemines and Julie Berthier of Mulhouse both made it in just before the clock struck midnight. Muller, who had been second seed, took third in 16:41.22, a five-second add. Berthier went .05 faster than her seed time, finishing fourth in 16:41.88.

Women’s 200 fly: Lara Grangeon of Calédoniens, who has already qualified for Berlin in the 200 and 400 IMs, added another qualification to her list winning in 2:11.57. Second place went to Marie Wattel of Nice, whose 2:12.86 broke the national age group record for 17-and-under girls. She had previously set the mark (2:13.27) as a sixteen-year-old at last year’s championships. Barbora Zavadova (Czech Republic) rounded out the podium in 2:13.45.

Women’s 200 free: France’s most successful talent on the international level, Camille Muffat of Nice, bounced back after her 50 free final to win with a respectable 1:57.05. With the exception of the 50 fly, this is the most depth the French women have shown in an event: the top six finishers all beat the Berlin qualifying time of 2:00.58. This is good news for their 4×200 relay in Berlin. (N.B. The French won bronze in the 800 free relay at both the 2012 Olympics and 2013 World Championships.)

Men’s 100 free: And then suddenly it was time for the Big Event. The French men’s 100 free is loaded with talent, which one might be able to guess from the success their 4×100 free relay has had on the international scene (gold at 2012 Olympic Games and 2013 World Championships, beating the US in both instances).

It was a spectacular final and lived up to its hype. Apparently sprint freestyle is alive and well in Marseille, France. Marseille’s coach and manager, Romain Barnier, was selected as the French national team head coach in February, 2013. His contract was extended through the 2016 Olympic Games last October.

did anyone else think it wasn’t a very impressive French nationals?

Not very much depth, yeah, except a few bright spots, especially in these events today. I know Bobo’s had trouble finding videos for this meet, but does anyone have a link to the men’s 100 final? Would be fun to watch.

The qualification standards for Berlin were fairly easy to make without much/any rest for France’s top tier of swimmers, so I’d expect much faster times at Euros. It’s nice to see Mehdy Metella continuing to come along. He’s got great genes for swimming fast; his sister Malia won silver in the 50 free at the Athens Olympics.

Finally Eurosport posted a race video and of course it was the men’s 100 free.

Problem, I don’t know why but I can’t watch the Eurosport videos anymore.
Hopefully it works for you.
Men’s 100 free final
http://video.eurosport.fr/natation/natation-championnats-de-france-florent-manaudou-est-bien-le-roi-du-sprint-francais_vid322584/video.shtml

Thanks Bobo, but it says:

Sorry. 🙁
Perhaps it’s not available outside of France or Europe. I don’t know.