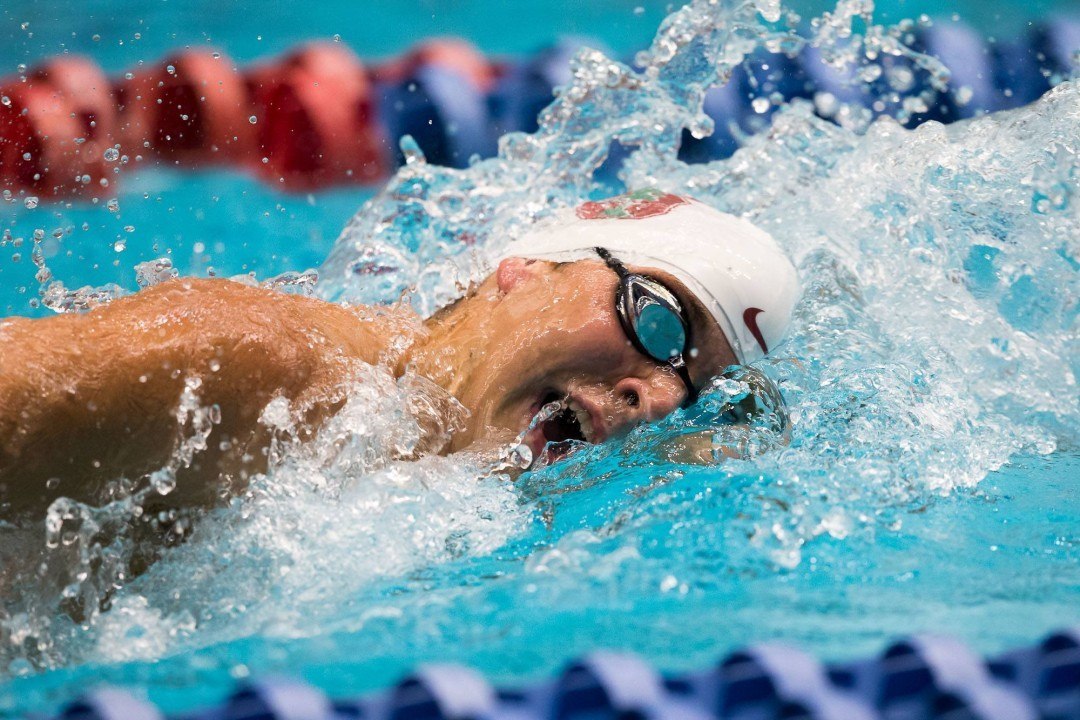 Though Stanford was at home, the result is still at least mildly surprising: the Cardinal were 6th at last year’s NCAA Championships (compared to 8th for NC State) but lost national champ David Nolan to graduation and All-American Tom Kremer to redshirt. Stanford was just 10th in our season-opening Power Rankings, with NC State at #4.

The teams split the event wins at 8 apiece, but Stanford’s depth helped them accumulate 28 more points along the way. No event was more key in that effort than the 200 fly.

NC State started out red-hot, carrying momentum from their big meet with Cal Friday night and winning four straight events to open the meet and build a 26-point lead. But Stanford got its first win with a 54.92 from freshman Matt Anderson in the 100 breast, and it was a 1-2 finish.

But it was the subsequent 200 fly that really put the hurt on the visiting team. Umbach went 1:44.63 to win the race and put up the best time in the NCAA this year (pending the results of other meets this weekend), and his Stanford teammates Jimmy Yoder (1:45.55, #8 nationally) and Abrahm DeVine (1:46.84, #18) followed in a 1-2-3 gut punch. Suddenly NC State’s commanding lead had shrunk to just 2.

The teams would trade the lead again after that, but late in the meet, Umbach provided the dagger swim as well. He went 1:45.93 to win the 200 IM and rocket to #3 in the nation while also putting Stanford over the 150-point mark, officially clinching the meet.

NC State wasn’t without its bright spots, though. The Wolfpack swept the relay events in dramatic fashion. The 200 medley relay came down to three tenths of a second, with anchor Simonas Bilis splitting 19.55 to help the Pack take the night’s first win. Sophomore backstroker Hennessey Stuart led off in 22.08 to give NC Stat the early lead and the team went 1:28.01. Stanford was 1:28.33 behind a 21.12 Umbach fly split.

Bilis also dominated the sprint freestyles to finish with a four-win day. His 19.47 blew out the 50 free field, and his 43.08 win in the 100 free displaces Caeleb Dressel as the top time in the NCAA for the time being.

Anderson is on fire with breast he’s really close to his best time and it’s early in the season to. Look for him to do big things

NC State is going to be incredible at NCAAs. They will win at least 3 relays.

not saying Clark’s swim wasn’t studly, but he was in a racing suit and this swim today was in a brief. just saying!

You actually just said that. You are right swimming an entire thousand before swimming another one at 8:51 was all on the jammer. Clark could have swam a third thousand in board shorts faster than 9:03

A little exaggeration there, but the point is made.

I love the NC State team they’ve built, and no question they are the favorites in the 200 FRR, and one of the favorites in the 400 FRR. I’m not seeing a straight forward 3rd relay win. If everything goes right, they could be in the mix in the 800 FRR, but even if they had a breastroker (it seems like they don’t?) their other legs aren’t fast enough to win a medley relay.

State could get a 24 low but nothing crazy.

I think they are the favorite for 800 FR. Don’t forget they were 2nd in this relay last year. They lost Williams, but adding Ress this year. Bilis, held, Dah, and Ress are swimming well. These guys may take it all in March. I just hope they don’t fully shave and taper for ACC