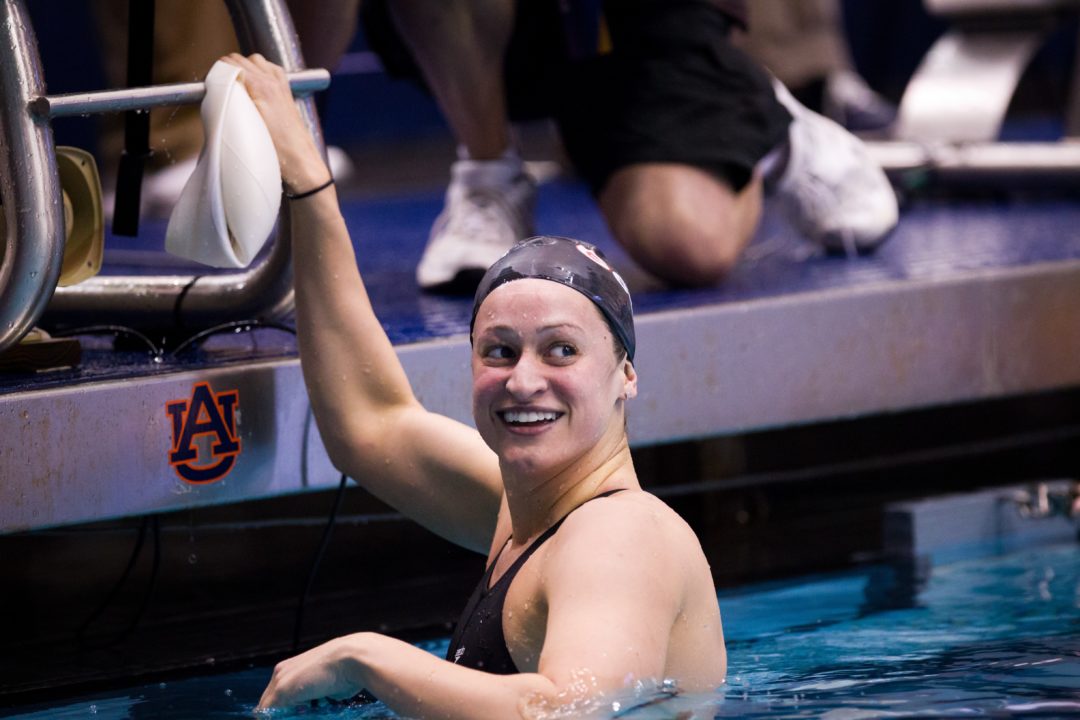 After just missing the Olympics in 2012, Megan Romano made up for it by coming through in the clutch in 2013. Archive photo via Tim Binning/TheSwimPictures.com

What: 4×100 freestyle relay at the 2013 FINA World Championships

Why: Redefined the meaning of “clutch”

Having five best times at a meet makes you feel like an 8 and under swimmer all over again.  Megan Romano at the age of 22 had the fun of getting those types of results, however, it may have come at the wrong meet.  Best times are best times but not when the Olympic Trials are a few weeks away.  Romano ended up missing making the Olympic team by one spot and settled for US Open at the end of August instead of London.  In this sport where the major spotlight comes every four years, most critics would’ve counted Romano out for the next go around.  But 2013 proved to be Romano’s year, and there’s one swim that proves why.

Going into the first day at the FINA World Championships, the Americans were gunning for the Australians, trying to claim gold in the first relay of the meet.  The final event of the night was the 4×100 free relay featuring a Missy Franklin, Natalie Coughlin, Shannon Vreedland, and Megan Romano.  One would think a clutch swim on a relay would come from an Olympian, and this relay included two of the US’s best ever.  But Romano, a swimmer with no international experience, came through as the anchor leg to give the US another gold alongside an American record.  Romano went head to head with Alicia Coutts and turned on the gas in the final meters.

52.60.  Romano’s fastest split ever, fastest of the Americans, fastest the US had seen that year.

.7.  The lead the Australian’s had going into the third leg.

.12 The margin of victory for the Americans.

1.93 The amount of time shaved off the old American record.

Some will compare this anchor leg to Lezak of 2008 or Agnel of 2012, but Romano’s was different.  Maybe not because she came from behind to win, like Lezak, or the fact that she had one of the fastest splits in the pool, like Agnel, but because no one expected it to be Megan Romano.  She redefined the meaning of clutch with the element of surprise and a dash of perseverance.  Coming back after a disappointing Trials, one would’ve thought she would’ve hung up her suit and goggles after becoming an NCAA team champion.  But Romano shocked the world by sticking with it and swimming herself into the record books, clutch swim and all.

Conor Dwyer-Duel in the Pool

In what seemed to be the final nail in the USA’s coffin at the Duel in the Pool, Conor Dwyer came through in the last individual event, the 200 IM, to bring the US a fighting chance.  As “one of the most exciting meets he’s ever been a part of”, it was no surprise that Dwyer performed the way he did.  With that much excitement and energy behind you, there’s no question to give it all you got.  And that’s precisely what Dwyer did.

Simone Manuel-Duel in the Pool

Before Duel in the Pool, Simone Manuel’s name had been uttered only once during a 50 free final at World Championships.  But after a clutch anchor leg on a tie breaking mixed relay and an American record to boot, Manuel’s name, as well as her smile, was all the talk in Scotland.  At only 17 with no Olympic experience like most of her teammates, and the meet on the line, the pressure was on.  But with Manuel hailing from “clutch city” Houston, TX, she pulled through and defied all odds.

Known as a backstroke specialist, Jeremy Stravius, shocked audiences worldwide after surging from sixth to first with a monster relay leg, passing Russia and the United States in the process in the 4×100 freestyle at World Championships. Even though the Swammy won’t be given to a Frenchman for a repeat, it’s important to note that French relay swimmers give impactful meaning to the word clutch.

You know what’s great about this article? The content. Typos are typos, chill.

Where is Romano training?

SwimFan – she’s spent the semester at Georgia finishing up school, and last we spoke to her was still undecided as to what she would do after this semester.

***TYPO ALERT***
It says ‘Angel’ in the article two times instead of ‘Agnel.’ Please fix this! Thanks and continue to pump out these sweet articles.

Yannick is a swimming angel. 🙂

Megan is certainly a clutch swimmer, but to say that she had no international experience is false. She won 4 medals at Short Course Worlds, 4 medals at WUGS, and even competed in World Youth Champs back in 2008 (and medaled).

Miss Wixted, I don’t know but it looks like you have drunk a little too much for Christmas. 🙂

Duel in the Pool wasn’t in Switzerland but in Scotland.
And Jérémy Stravius isn’t a butterfly specialist but a backstroke specialist.

Perhaps next time Australia will not put a swimmer on the anchor leg who has already swum 4 races before in the same day. 🙄
But congrats to Miss Romano. She has been clutch.

I think it should have a Late Bloomer Award for Eugene Godsoe.He had an amazing year!