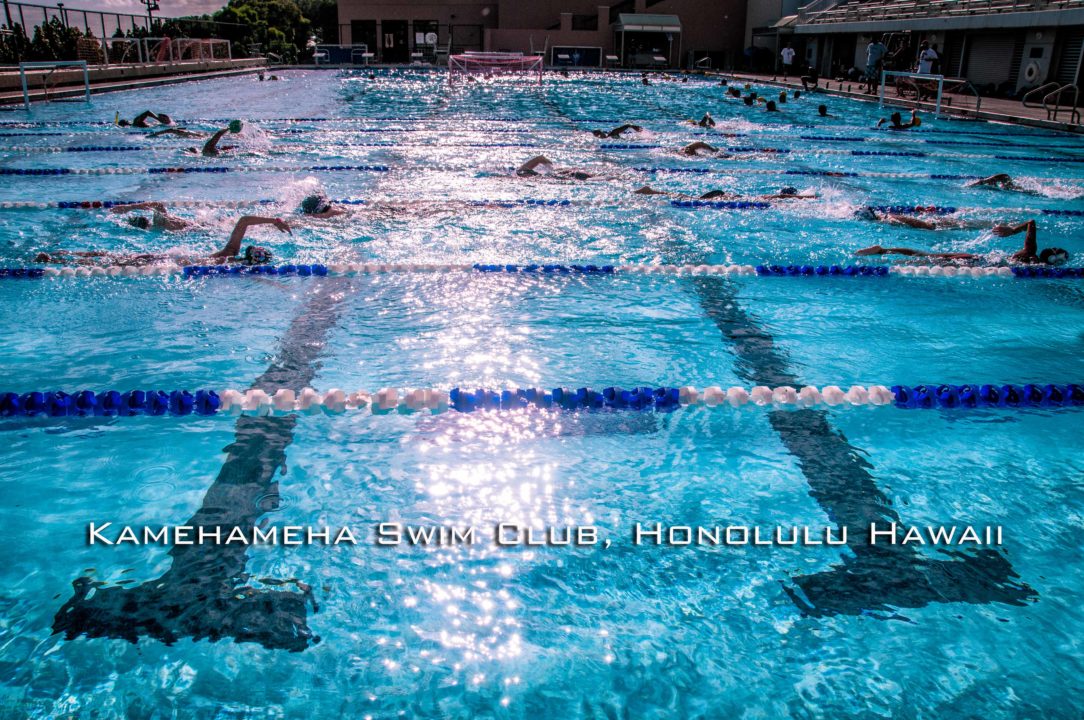 Here's a look at swimming Hawaiian style. We catch up with the Kamehameha Swim Club in Honolulu for this club profile. (Mike Lewis / Ola Vista Photography (follow @mike2swim)

We had a great opportunity to catch up with the cool folks at Kamehameha Swim Club in Honolulu.   Of course it’s paradise over there in Hawaii but these swimmers are no slackers.   They train really hard and have some fast swimmers.   In fact, this past summer the Kamehameha Swim Club’s 15 – 16 year old boys broke the national record in the 200 (LCM) Freestyle relay.   They are one of the largest swim clubs in Hawaii and have upwards of 250 swimmers.   They have also won the last 20 consecutive Hawaiian State Swimming Championships.

The team is run by Co-Head Coaches John and Kevin Flanagan.   If those names sound familiar that’s because these guys are fast swimmers too.   Kevin was an NCAA All American at Florida State specializing in sprint freestyle and John was a distance star at Auburn University and was a member of the 1997 NCAA championship team.  Both competed at the 2000 Olympic Trials.  John went on to USA Swimming national team success as an open water swimmer and was on the 2001 world championship team.   Like a lot of clubs they have their challenges; the biggest of which is travelling to the the mainland for competitions.   Kamehameha Swim Club fosters a unique approach to coaching as well – they rotate their coaches throughout the different groups so the entire staff has a good grasp on the swimmers at each level.

A HUGE SwimSwam thanks to these guys for sharing their Aloha spirit.

Love those Flanagan Boys!!! They BOTH swam age group at the Oahu Club, Rowdy Gaines was their coach!!

John went to FSU and Auburn?