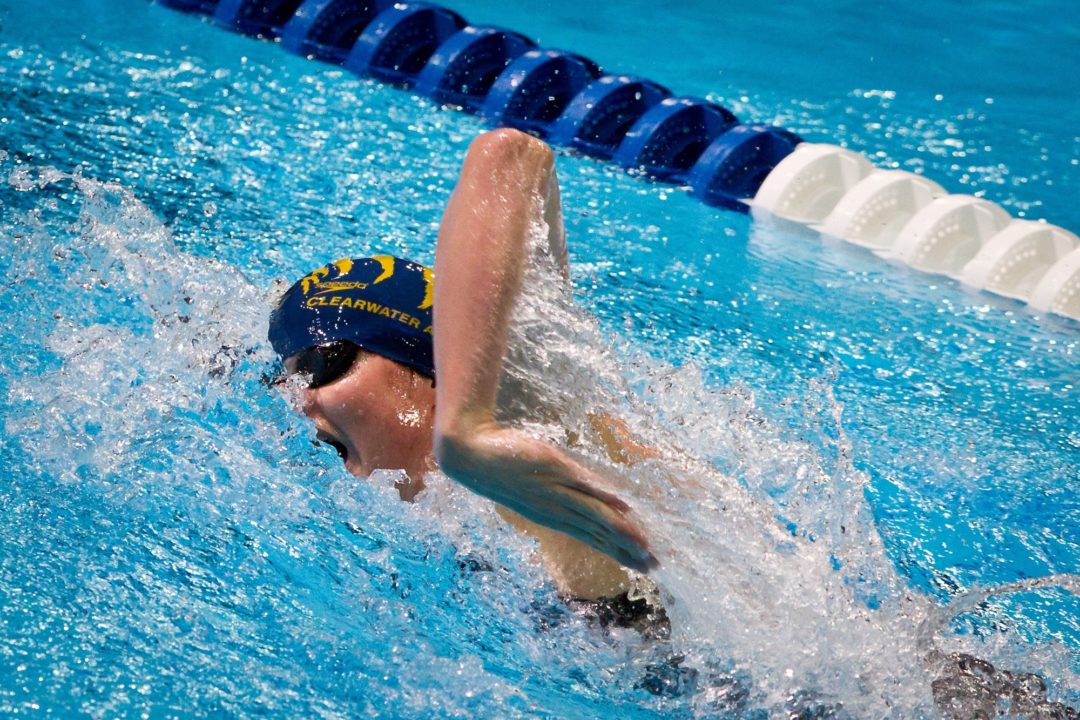 Matthew Hirschberger and his teammate Becca Mann (above) gave Clearwater a sweep of the 1000 freestyles on Tuesday. (File Photo: Tim Binning/TheSwimPictures.com)

The Clearwater Aquatic Team is having themselves a day on the first night of the NCSA Junior National Championships in Orlando. Two swimmers, aged 14 and 15 respectively, swept the meet-opening 1000 yard freestyles, including one in a National Age Group Record.

No, that’s not a typo. He broke the record by more than five-and-a-half seconds. Hirschberger now has the record for this event in both the 11-12 and 13-14 age groups.

That time is so fast, that it would already rank in the top 15 among 15-16 year old boys, just behind the legendary Fran Crippen. The next-highest placeing 14 & under in the race was First Colony’s Christopher Yeager in 9:35.66 for 75th; He also ranks in the top 100 13-14’s of all-time in this event, which shows how truly outstanding Hirschberger’s victory was.

Jay Litherland (9:04.76) of the Dynamo Swim Club and Tyler Fowler (9:05.82) of the Tsunami Swim Team in Kansas City, two rising swimmers in the distance scene, were 2nd and 3rd, both with five-or-better second time drops.

Hirschberger’s teammate, both under the guidance of the legendary Randy Reese, Becca Mann won the women’s race in a 9:31.79. That knocks another eight seconds off of her own personal best in the event. That’s a huge time drop, but sort of what she seems to do at every meet in one event-or-another.

Mann is only 15, so it would’ve been a challenge to break this Katie Ledecky NAG Record already, but the swim does rank her 7th on the all-time Age Group list. She’ll have another 9 seconds to go in the next year-and-a-half or so to get this one.

Leah Stevens from the Lakeside Swim team in Kentucky was 2nd in 9:38.34: a two-second drop for her.

The real surprise to stand on this podium, though, was Kylie Stewart, a 16-year old from the Dynamo Swim Club, in 9:48.32 for 3rd.

She’s already well known to followers of American swimming; in fact, she’s on the national team thanks to her 5th-place finish in the 200 back at the Olympic Trials. She’s always had a very good 500 yard free, but hadn’t really done much to stretch it to the 1000 until now. That swim is a best time for her by 13 seconds.

Ummmm Becca Mann might want to drop more than 9 seconds if she wants Ledecky’s NAG record. Ledecky is still 15 herself with a whole year to lower it further.

^ agree!! but Becca Mann will likely be Ledecky’s biggest international competitor looking ahead

Chinese have not done very well with keeping their young 13 yr old distance talents in the mix internationally. They all burn out by age 14

If she develops she willhave a shot at both WR withouth even being 15.. and let´s see how well she goes at Worlds to have a clearer picture..

You are probably talking about Li Xuanxu burnout.. Cause Sun Yang kept developing at a steady pace and still has not reached his peak..

however as we all know… her race strategy is definitely go for it and hope to hold on (which so far has always happened) I don’t think she would’ve gone all that much faster if she just did a 1000 anyways. Maybe 3-5 seconds but not more than that

Wow! As expected, this meet will be explosive! And it starts very well. 2 distance races, 2 wins for the Clearwater swimmers and 2 fast races. I didn’t expect a race like that from Matthew Hirschberger. He was very fast 2 years ago. He was very tall for his young age and many thought he wouldn’t much improve in the future. But absolutely not. He now responds with the best possible way and shows us he’s perhaps the big distance freestyle talent USA looks for on the men’s side since Larsen Jensen. Becca Mann is a machine and almost every time she goes in the water she beats her best times. So her 9.31.79 are not surprising. The future of… Read more »