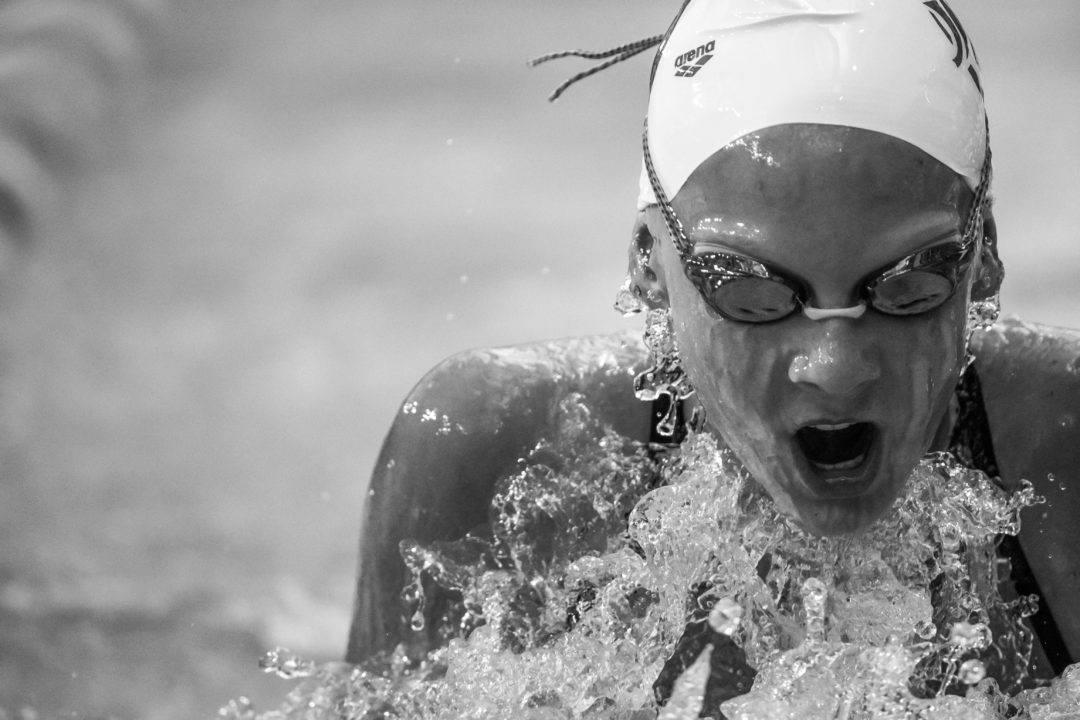 Tuggle won an NCSA Junior National Title on Thursday in the 200 free. Only Missy Franklin has ever been faster as a 13-14. Archive photo via Mike Lewis/Ola Vista Photography

NCAP’s Phoebe Bacon won the 50 back on the last day of the 2018 NCSA Junior National Championships.

Aquajets swimmer Isabelle Stadden won the 100 back on Friday at NCSA Junior Nationals.

13-year old Claire Tuggle became the youngest winner so far at the 2018 NCSA Junior National Championships on Thursday, winning the girls’ 200 yard free in 1:44.96. Besides ranking 39th among swimmers of any age in the country this season, the time is also the 2nd-fastest 200 yard freestyle in history. The next-fastest time by a 13-year old nationally this season is nearly 4 seconds slower, and as far back as USA Swimming’s SWIMS database goes, no other 13-year old has been better than 1:48.27 (5-time Olympic champion Missy Franklin).

Franklin is also the only swimmer in history to be faster than Tuggle’s time even at 14 years old. In 2010, the same year as Franklin made her first senior international team, the Pan Pac Championships squad, she swam 1:44.55.

Editor’s note: Taylor Ruck has spent most of her life training in the United States, and because she’s a USA Swimming member, is included in the official top times lists. She represented Canada at the 2016 Summer Olympics.

This event has been a particularly-strong indicator of future success. The top 20 swimmers in this age group is riddled with NCAA All-Americans (almost all on the list who are old enough have earned honors). Among the Olympians in that group are Franklin, Taylor Ruck, Liz Pelton, Katie Ledecky, Natalie Coughlin, Katie Hoff, and Simone Manuel. Stephanie Elkins, who held the record from 1978 until Franklin broke it in 2010, qualified to race at the 1980 Olympics, but was left out by the boycott. She was a member of the World Championship winning 400 free relay in 1978.

Great swims! Still don’t understand why Taylor Ruck isn’t representing the country she was raised in……(3rd on list here). Obviously it’s easier to make Canada’s team but I don’t get it otherwise.

3
-23
Reply
Braden Keith
Author
Reply to  KNOW IT ALL

Well, for starters, she’s not an American citizen…

She should be one to watch for 2020. She’s getting a lot faster every big meet.

forget that, she could sneak on to a pan pacs or worlds team this year in the 400-800

So exciting! Is Claire especially tall for her age? (that’s always a factor in the 11-14 age groups).

PS – I love that Natalie Coughlin is still on the top swims list from the 90s.

Looks like Claire loves that meet. Last year she also had huge time drops. A monster 200 free after a great 800 free on day 1.
Congrats to Claire and her coach. After her 2.00 something last summer in LCM I knew she could swim 1.44 this SCY season. But I had some doubts it would happen at this meet after her “average” (considering her huge talent) 100 free performance in 50.10. I was wrong to doubt about a young champion like Claire Tuggle. She’s a very very very special talent. I repeat that she will be in the US 4X200 free relay team in the olympic final in 2020. She’s smooth in the water. Clearly her coach makes… Read more »