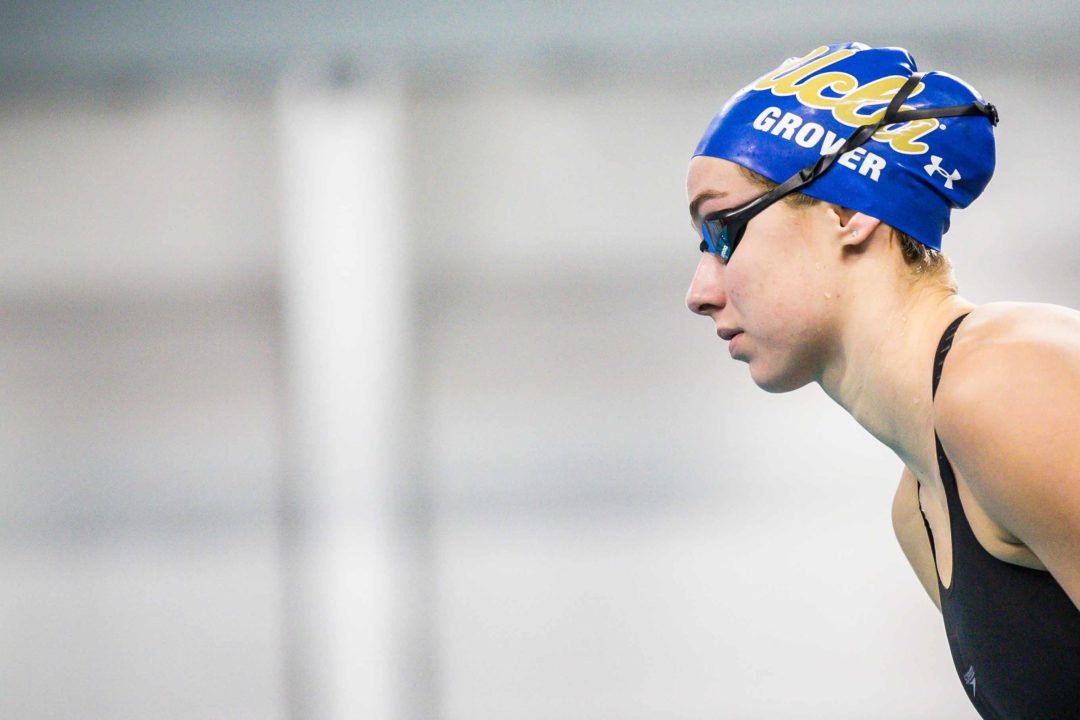 Grover swam 4 relays amid 5 events across two days of racing, which included a big season-opening split in the 200 free relay. Archive photo via Jack Spitser/Spitser Photography

The UCLA Bruins had their first official NCAA competition of the season on Friday and Saturday when they hosted Fresno State for a two-day dual meet in Los Angeles.

With 16 events split across 2 days of competition, UCLA came out on top by 62 points, even after damping that margin via exhibition swims. UCLA had the fastest performer in all but 1 event over two days. Both teams wore racing suits for the competition.

“It’s been a challenging season and a different season, and we knew that coming in, so our goal was to practice racing all-in and see what we could do,” said UCLA head coach Jordan Wolfrum. “That’s what we’re going to keep doing in every meet we have, because we don’t know how many chances we’ll have this year. I was really proud of the effort, energy, and attitude of our team this weekend.”

With most of the Pac-12 teams not racing in the fall semester, and with the coronavirus situation in both Arizona and California, where many of those teams live, being so bad, there are still lots of questions to be answered about who’s available for this season.

UCLA’s roster arrived mostly intact for the meet. Of underclassmen swimmers who scored at last year’s Pac-12 Championship meet, just 3 were missing this weekend: 15-point sprinter Gabrielle Anderson, who is still on the roster; plus 8-point scorer Jessica Epps and 7-point scorer Olivia Andrew, who are no longer on the Bruins’ roster.

The team was also without a couple of freshmen.

The top returning swimmers for the Bruins didn’t necessarily swim best events. Claire Grover, who was 5th in the 50 free and 100 breaststroke at Pac-12s last season, swam to a 2nd-place finish in the 200 IM in 2:03.88 behind teammate Delaney Smith (2:01.42); and also swam on 4 relays for UCLA.

The lone race of the meet where the Bulldogs beat the Bruins to the wall came in the 200 backstroke. There, Athena Clayson, a sophomore from Liverpool, England, won in 1:58.02. That’s easily her best time out of a conference championship or mid-season invitational meet – by almost three-and-a-half seconds.

Fresno State previously swam as part of a tri meet in early December against San Diego State and San Jose State. Clayson’s result was a bit of an anomaly – much of the team was faster than they were in December. That includes Keren Wasserman, who transferred to UCLA after East Carolina, where she was a team captain, cut their team program. She swam 1:05.20 in the 100 breaststroke, which is a second-and-a-half better than she swam in December.

“We’re getting better and taking advantage of every opportunity,” Fresno State head coach Jeanne Fleck said. “We swam really well against a Pac-12 foe on the road. Our girls didn’t back down. They got up and raced their races and made improvements from December.”

The divers were participating in the parallel Bruin Diving Invitational.