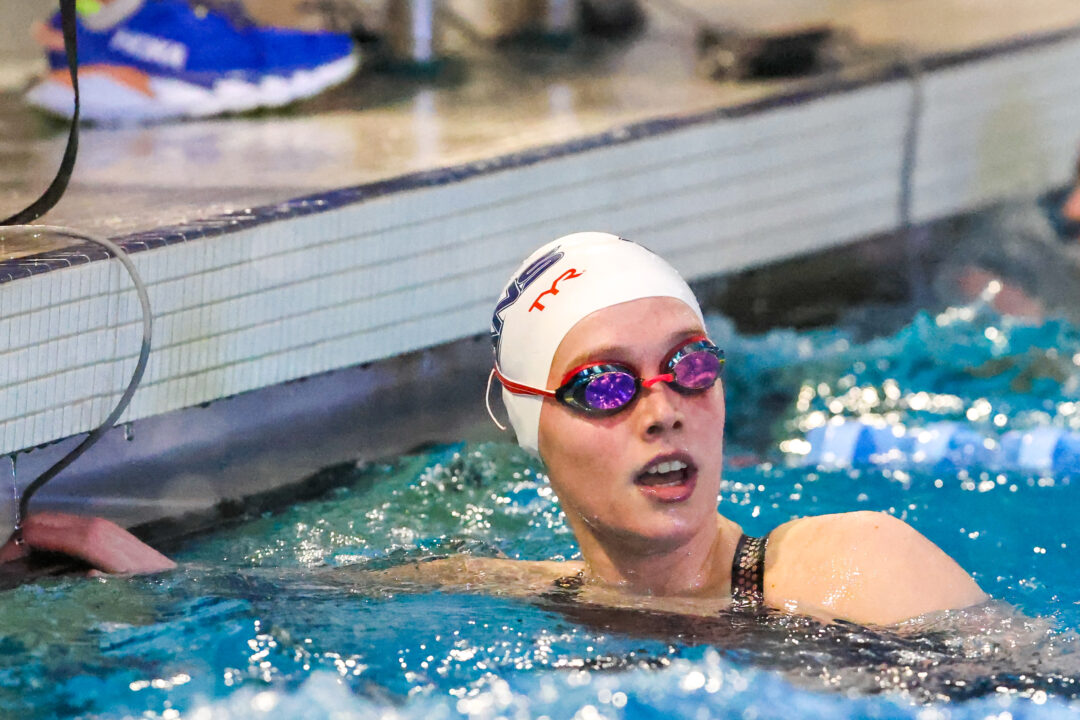 Across the country from the Pro Swim Series in Mission Viejo, some serious Olympic contenders will be racing in Cary, North Carolina. Archive photo via Brad Ipock/Blended Light Photography

The USA Swimming Pro Swim Series meet in Mission Viejo, California, will draw most of the top Olympic contenders this weekend, but across the country in North Carolina, the TAC Titans Long Course Premier Meet might have the most intriguing race of the weekend.

There, high school butterfly wunderkinds Claire Curzan and Torri Huske will face off in what could be an Olympic Trials showdown in the women’s 100 meter butterfly.

The two have traded National Age Group and National High School Records over the last 2 years. The 16-year old Curzan’s best of 56.61 from November currently ranks her 2nd in the world this season, while Huske’s 57.36 from a different meet in November ranks her 5th in the world.

The two are the fastest Americans so far this season, ahead of two other teenagers: Kate Douglass (57.43) and Gretchen Walsh (57.43).

Curzan, who is now the favorite to win at Trials (albeit not an insurmountable favorite given the talent in the event), has raced a lot since quarantines lifted last summer, but it’s been almost entirely in her home pool.

This has often led to questions about why she’s not traveling more to Pro Swim Series meets.

The one answer is pretty straight-forward: both of her parents are doctors, including her mom, who is an emergency room doctor, and the pandemic has placed a big strain on the medical system and those who work in it. With Curzan being only 16 and a minor, it has just made more sense for her family to stay close to home.

The other answer is shown in this meet: she doesn’t have to travel far from home to get big-time racing in.

In addition to Huske, Ally Tetzloff, Bailey Nero, and Charlotte Hook, all of whom have been 59 in the 100 fly in long course and will contend for semi-finals spots at Trials at least, will be at this meet.

This meet will be littered with big names, with the pros from Wolfpack Elite based out of NC State in attendance. That means Justin Ress, Coleman Stewart, Katrina Konopka, South African Record holder Chris Reid, and Jack Saunderson will also race.

Another former US National Teamer Emma Barksdale, based out of South Carolina, will race as well. So too will Paige Madden, who just completed her collegiate career at the University of Virginia by winning the 200, 500, and 1650 freestyles at the NCAA Championships.

The under-the-radar storyline to watch here is Sam Stewart, a former Texas Longhorn who is training at home in Mississippi with the YMCA Hub Fins. A member of the USA Swimming National Team, the 24-year old Stewart was working on a breakout year in 2020 before the summer was canceled. His 1:57.76 in the 200 IM was as fast as other swimmers often thrown into the mix for a spot on the Olympic Team in that event, like Carson Foster and Andrew Seliskar.

In spite of a big drop to get through to that time, Stewart still seems to be written off by most fans as a serious contender.

With the top (legitimate) seed in that 200 IM, and enough quality behind him in the form of 17-year olds and top 20 recruits Sam Hoover and Baylor Nelson, he’ll have a chance to prove his legitimacy this weekend. He could benefit a lot, in public perception, from the attention that will be paid to this meet thanks to some of the big battles alluded to above.

Absolutely unreal. I am shocked by the number of downvotes these positive and supportive posts are eliciting.

The faster you get, the more the haters come out to hate. Take a good look in the mirror and ask yourselves why you are hating on a teenager. From an uninvolved distance, i can see that there are a lot of people personalizing her success as some sort of slight against themselves, their teams or their daughters and they are putting that jealousy/sour grapes on full display.

Seems like a bunch of hens clucking on this comment board. Which of you has a kid competing against Curzan? Let’s talk about the repeat, 20-something underperformers instead of speculating about why a then-14 year old stayed with her dad at an international meet. If nothing else, this kid has her whole life ahead of her and why start now with having to prove a bunch of jealous azzhats wrong. Go home and stroke your kid’s feathers and tell her how much faster she is than Claire.

i agree with Joy. As a parent and grandparent in today’s world, I would keep my chickies close. Listening to Claire’s interviews, she comes across a a poised and genuine person not full of herself Shes articulate and I say Claire and her parents are to be congratulated.

Favorite at trials? Too strong, at best a co-. Credit to Torri Huske for traveling to their home pool.

Not at all faulting Curzan for not traveling far. High schoolers don’t need to go out and travel everywhere.

I question why TAC keeps almost all their kids at meets in their home pool; seems like it will be a bigger adjustment for those meets they do have to travel to (Trials, namely) versus others who are used to traveling and swimming on the road.

It’s obviously working for the team given their success, and they’ve been having incredible meets with talent from across the country come in to race. But it’s a big adjustment to go from swimming in your home pool for every meet, sleeping in your own bed and eating at home, to go on the road… Read more »

There may be something to what you say. In Budapest at 2019 Jr Worlds, Curzan was allowed to leave the team hotel to go stay with her father.

Your statement about leaving the team hotel to stay with her dad is true. And it’s the legitimate concern people have about Curzan. She has avoided most high level competitions as her coach keeps her in the TAC bubble to compete and throw up times. She swims a home meet at every Tyr Pro weekend. Her past behavior indicates the possibility of struggling away from her home pool or general area of the country. Travel is tough. And going head to head against top experienced stars is tough too. She’s avoided it. The possibility that the pressure and competition level in Omaha gets the better of her is very real. I’d hope most people don’t wish ill on her. But… Read more »

In Omaha she will still be staying with her parents. The bigger question is, what happens if she makes it to Tokyo? No staying with the parents there.